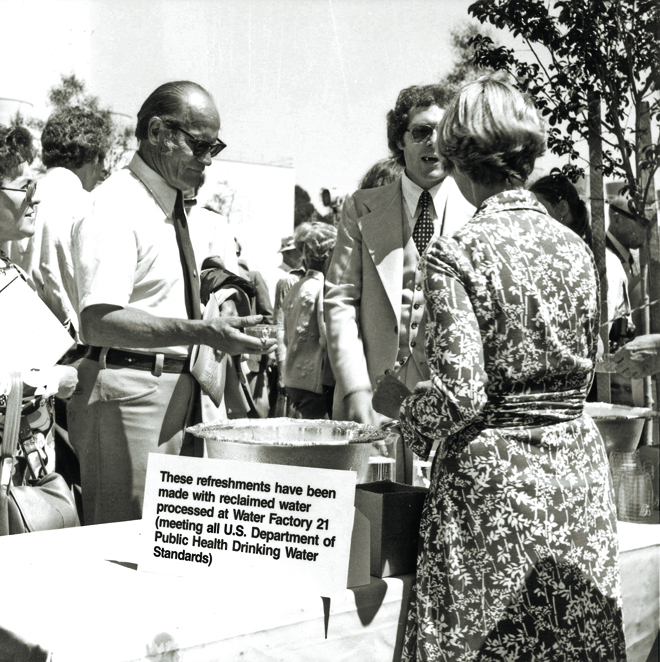 In 1933, neither the county nor local cities were able or willing to take on the formidable tasks of protecting Orange County’s rights to Santa Ana River flows and ensuring high-quality, reliable groundwater for its citizens and businesses.

Orange County farmers weren’t getting their fair share of river water as it was taken further upstream. The population was growing and there was heavier reliance on the groundwater basin. To meet these demands, the Orange County Water District, a special district, was formed and authorized by the state of California. The District is pleased to be celebrating its 85th anniversary this month and continuing to serve its communities in Orange County.

As a special district, OCWD is an independent, government body that functions much like an enterprise. It is managed solely by its 10 board of directors, while day-to-day operations are delegated to its general manager and District staff.

It is primarily funded by replenishment assessment fees paid by member agencies. And, because OCWD has developed an outstanding credit rating, it gets great values on loans for infrastructure projects that are essential to provide service—keeping the cost of pumping water reasonable and passing the savings to member agencies and their residents.

The District has grown with the urbanization of Orange County and provides 75 percent of the water supply to 2.5 million residents living in north and central county areas. Behind Prado Dam in Riverside County, OCWD owns and has developed the largest area of constructed wetlands in Southern California where the Santa Ana River flows. The wetlands’ natural purification process ensures that river water is cleaner by the time it reaches Orange County.

In Orange County, OCWD takes its advanced purified Groundwater Replenishment System (GWRS) water and Santa Ana River water and percolates them into the large groundwater aquifer via more than two dozen recharge basins located in Orange and Anaheim. It ensures the purity of its water through more than 400,000 analyses of about 20,000 water samples taken yearly by its Advanced Water Quality Assurance Laboratory.

In addition, it works with the U.S. Army Corps of Engineers to store stormwater behind Prado Dam for eventual release and capture downstream during drier times—ensuring that the most amount of water possible can be used and not lost to the ocean.

OCWD’s first Groundwater Management Plan was published in 1989, a full 15 years before the California Sustainable Groundwater Management Act (SGMA) was passed and groundwater management plans were required. The recent law provides authority for agencies to develop and implement groundwater sustainability plans or alternative plans that demonstrate the basin has operated within its sustainable yield over a period of at least 10 years. Because of OCWD’s experience, the state called upon District staff as it developed the SGMA.

OCWD provides open houses, community presentations, the Children’s Water Education Festival, OC Water Summit, guided tours of the GWRS and other facilities, and self-guided tours through its H2O Learning Center corridor, to bring the knowledge of Orange County water, its challenges and stewardship to young and old, industry professionals, students, and the general public alike.

The Orange County Water District has a rich history of tradition and development, ever looking to the future and providing the best quality and reliable water in a cost-effective manner for Orange County residents.

Over the next few months, the District will feature several videos in this newsletter that highlight a different aspect of the scope of OCWD services and innovations. You can find the first of these in Bill Dunivin’s tribute, located in the “OCWD Employees” section of this issue.