The Orange County Water District (OCWD; the District) has an ongoing commitment to long-term facility planning and infrastructure investment. Its most recent project more effectively captures and utilizes water that would otherwise be lost to the Pacific Ocean.

The Burris Pump Station Replacement Project has recently been completed. The facility was rededicated at a small ceremony on July 20 in Anaheim. A special thanks to Claudio Gallegos, acting district director, office of Congressman J. Luis Correa; Jose Martinez, senior field representative, office of Assemblyman Steven Choi; and Pasquale Talarico, deputy chief of staff, office of Senator John Moorlach who presented the District with certificates of recognition to commemorate the occasion.

This project illustrates the complexities of managing one of the world’s most advanced recharge systems that includes more than two dozen recharge basins (artificial lakes) and numerous pumps, pipelines and levees, plus managing wildlife.

OCWD provides a reliable, high-quality water supply at the lowest reasonable cost in an environmentally-responsible manner. To do so, we replenish water that is pumped from the groundwater basin by about 400 wells belonging to local water agencies, cities and other groundwater users.

OCWD recharges (puts back) water from several sources, including surface water from the Santa Ana River and advanced purified water from the Groundwater Replenishment System. Water is collected and contained in recharge basins, where it naturally percolates down to the vast Orange County Groundwater Basin that supplies 75 percent of the water needs for nearly 2.5 million people.

One of those basins, the largest at 125 acres, is Burris Basin. OCWD diverts Santa Ana River water into Burris Basin and the Burris Pump Station moves up to 400 Acre-Feet (AF) (130,300,000 gallons) per day of this water to the nearby Santiago Basins for recharge into Orange County’s groundwater aquifer. To put this into perspective, 400 AF of water is enough water for 800 families of four for an entire year.

In addition to water storage, the Burris Basin provides habitat for water-associated bird species, including the endangered California Least Terns, Sterna antillarum browni, and a species considered sensitive by the state of California, the Forster’s Tern, Sterna forsteri. The use of this basin, specifically the 2.4 acre bird island created by OCWD, heightens the importance of this site.

The Burris Pump Station was originally constructed in 1989 with four pumps placed on an incline, making it difficult to service. After 20 years of operation, the station started showing signs of significant wear and tear and needed seismic retrofitting. The benefits of constructing a new station outweighed the cost of rehabilitating the existing station. The new Burris Pump Station includes pumps in a more standard vertical configuration, built-in equipment for performing maintenance and state of the art electronic pump controls to assure the new station runs as efficiently as possible.

With the drought raging in California, it was important that OCWD keep the existing pump station functional to continue capturing and recharging as much of the Santa Ana River water as possible, while the new facility was being constructed. OCWD also has a responsibility to maintain the beneficial uses the basin provides to the many aquatic species and seabirds that use the basin for habitat and nesting.

The Burris Pump Station Project required extensive coordination between the Engineering, Recharge Operations and Natural Resources departments within OCWD. In addition, because this project was entirely contained in a wet basin that provides habitat for many aquatic and seabird species, OCWD worked closely with the Army Corps of Engineers, Department of Fish and Wildlife, California Region Water Quality Control Board, Orange County Department of Public Works, and Orange County Flood Control to create the coffer dam that assured construction met all environmental and legal requirements. 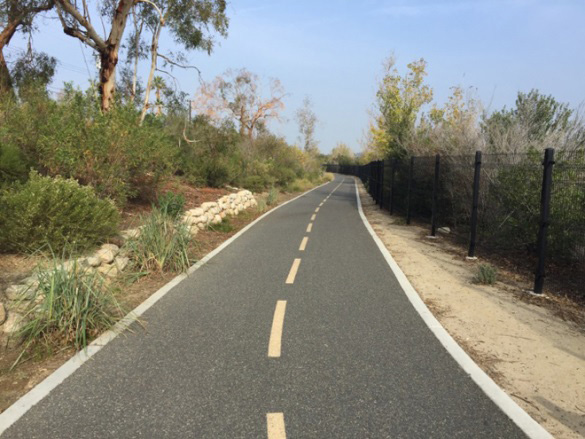 Because of our creative methods to work with extenuating circumstances and provide an engineering masterwork, Burris Pump Station Project Phase 1 received the American Society of Civil Engineers (Orange County) award for Flood Management Project of the Year.

To get a great view of Burris Basin, visit the Anaheim Coves walking path/bike trail, a part of the more than dozen acres of land OCWD has provided to the city of Anaheim for recreation purposes.