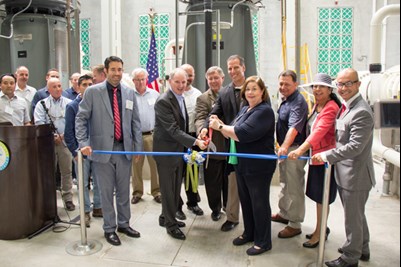 The Orange County Water District (OCWD; the District) has an ongoing commitment to long-term facility planning and infrastructure investment. Its most recent project more effectively captures and utilizes water that would otherwise be lost to the Pacific Ocean.

The Burris Pump Station Replacement Project has recently been completed. The facility was rededicated at a small ceremony on July 20 in Anaheim. A special thanks to Claudio Gallegos, acting district director, office of Congressman J. Luis Correa; Jose Martinez, senior field representative, office of Assemblyman Steven Choi; and Pasquale Talarico, deputy chief of staff, office of Senator John Moorlach who presented the District with certificates of recognition to commemorate the occasion.

This project illustrates the complexities of managing one of the world’s most advanced recharge systems that includes more than two dozen recharge basins (artificial lakes) and numerous pumps, pipelines and levees, plus managing wildlife. Read More… 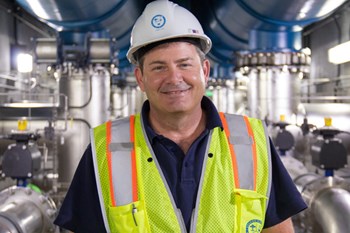 Orange County Water District (OCWD; the District) Operations Manager Tyson Neely was appointed by the State Water Resources Control Board (SWRCB; State Water Board) to serve as an advisory committee member on its Wastewater Operator Certification Program (WWOCP). Tyson fills the seat recently added by Assembly Bill 2890, which was approved by Governor Jerry Brown in 2016 adding one water recycling operator to serve on the committee to represent water recycling plants. Read More…

Fulfilling its commitment to provide water reliability for more than 2.4 million people in north and central Orange County, the Orange County Water District (OCWD; District) continues to make sound investments to refill the Orange County Groundwater Basin following several years of extreme drought in California. Stressing the importance of maintaining a diverse water supply portfolio, the OCWD board of directors (Board) voted July 19 to purchase up to an additional 100,000 acre-feet of imported water from the Municipal Water District of Orange County, the local representative of the Metropolitan Water District of Southern California (MET). This is enough water to meet the water demands of more than 800,000 people. Read More… 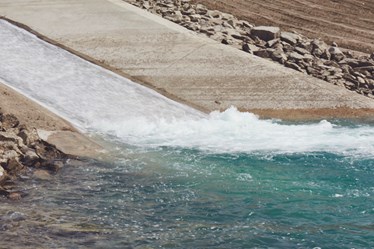 The groundwater basin has been threatened by shallow contamination plumes in the North Basin (Fullerton, Anaheim and Placentia) and South Basin (Santa Ana, Tustin, Irvine). The following is an update of the cleanup efforts in the North Basin. Read More…

How OCWD “Looks into the Future” of the Groundwater Basin 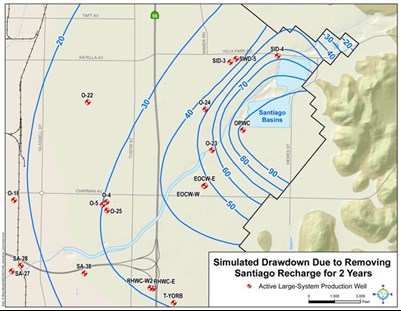 What is a groundwater model? In a nutshell, it’s a series of mathematical equations that simulate how water flows underground and is stored in the aquifers beneath our feet. Like a spreadsheet program, those equations are packaged in a software program that runs on a computer.

OCWD on Exclusive List to Apply for WIFIA Loan

The Orange County Water District (OCWD; the District) has been invited to apply for a $124 million Water Infrastructure Finance and Innovation Act (WIFIA) loan by the U.S. Environmental Protection Agency (EPA). OCWD was one of 12 selected from a group of 43 projects that span the nation.

The District will use this loan to help complete the final expansion of the Groundwater Replenishment System (GWRS), which will increase advanced purified water production from 100 to 130 million gallons per day—enough to meet the water needs of 1 million people in north and central Orange County. Read More…

As part of its standard to forge and maintain long-term, positive and proactive relationships with members of the local community and greater water industry and to be transparent about its operations and programs, OCWD board members and staff speak regularly before groups and at events. We participated in the following during June: 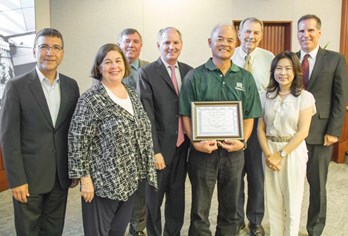 Gary Yoshiba is the project manager for the construction phase for the Alamitos Barrier Improvement Project. This project involves the installation of 17 injection wells, four monitoring wells and two shallow piezometers. All of the well installations have been at very demanding locations.

In addition to the successful execution of the project, Gary’s efforts have saved the districts tens of thousands of dollars by developing low-cost options for disposing purge water that exceeded permitted surface water quality discharge limits. Also, Gary has put in numerous overtime hours for the project.

Gary’s hard work and dedication is much appreciated and worthy of recognition.

Thank you to the more than 300 guests who toured OCWD’s facilities in June: