How OCWD “Looks into the Future” of the Groundwater Basin

What is a groundwater model? In a nutshell, it’s a series of mathematical equations that simulate how water flows underground and is stored in the aquifers beneath our feet. Like a spreadsheet program, those equations are packaged in a software program that runs on a computer. 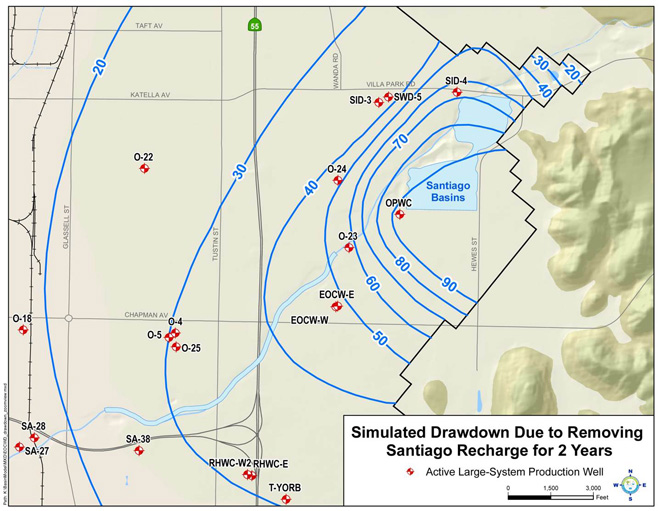 One of the first models built by OCWD in the late 1980s simulated the aquifers beneath the city of Irvine and was used to estimate how much groundwater pumping it would take (and where the pumping wells should be located) to control a plume of chemical contamination from the former El Toro Marine Corps Air Station. That model provided the essential information needed to design the Irvine Desalter Project which has been successfully operating since 2006 to clean up the groundwater in Irvine and put it to beneficial use.

When Pacific Ocean water started to overwhelm OCWD’s Talbert Seawater Barrier in Fountain Valley in the 1990s, OCWD staff built a model that represented the aquifers beneath the cities of Fountain Valley, Costa Mesa and Huntington Beach. They found that OCWD needed to double the amount of water historically injected into the barrier in order to control seawater contamination. That finding, in turn, formed the basis for the design and construction of 16 new injection wells that have been running since 2008 and have achieved what the model predicted – that seawater intrusion is no longer moving inland.

Groundwater modeling gives OCWD a way to test a future project concept without high-cost construction. Models give District hydrogeologists and engineers insight as to how a project will work “on paper” (or in this case, on a computer) beforehand.

How much trust should we put into model results? A groundwater model is only as good as it has been calibrated to represent past known conditions. OCWD has a large set of actual historical data which it uses to test the models to ensure that it matches past conditions before it uses the models to run future predictive scenarios.

The model that OCWD has used the most over the years is what it calls the “basin model,” because it encompasses the entire 300-square mile groundwater basin and extends approximately three miles into the Central Basin in Los Angeles County to provide for more accurate model results. Coverage of the modeled area is accomplished with grid cells having horizontal dimensions of 500 feet by 500 feet (approximately 5.7 acres) and vertical dimensions of up to 1,800 feet, depending on the thickness of each model layer at the grid cell location. The model is divided into three layers to represent the three major aquifer systems: Shallow, Principal and Deep.

Vast amounts of data are input into the industry-standard computer program “MODFLOW.” These include aquifer top and bottom elevations; lateral boundary conditions such as ocean, faults and mountains, hydraulic conductivity and storage coefficient/specific yield; initial groundwater surface elevation; natural and artificial recharge rates of runoff, precipitation, percolation and injection; and groundwater production rates for about 400 wells.

The model output provides water level elevations at each grid cell that can be plotted as a contour map for one point in time or as a time-series graph at a single location (see Figure).