The idea of living on a river or lake appeals to many people but should you be so lucky you probably also know that your scenic ambiance is shared space. The water that OCWD manages for the residents of Orange County, on its way to people, grows habitat and fuels the lives of countless fellow creatures. The conveyance system, the river itself is a wildlife highway from the mountains to the ocean. The river gets more urbanized as it courses coastward but sustains wildlife along its entire length, all part of a healthy riverine system. You really cannot put water on the land for long without growing something. A wetted river channel is going to grow plants and insects, supporting fish, birds, and other life. If it does not, it is either quite ephemeral or something is seriously wrong. The closer you live to the water, the more your property functions as an extension of the riverbank and the more likely you are to experience riverine creatures, some quite pesky. 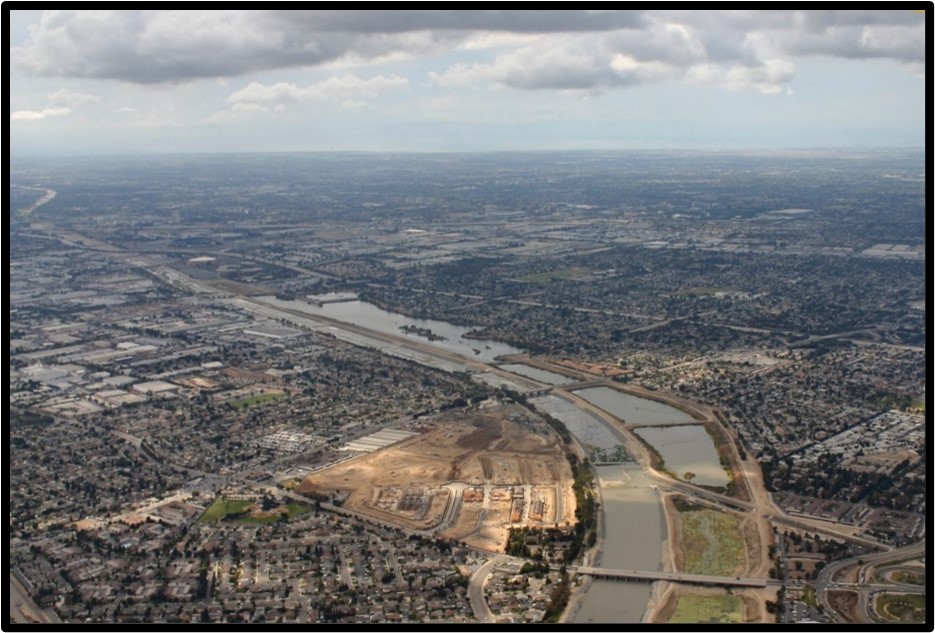 It is May and the temperatures this season have already hit the 90s. The Santa Ana River flows full, bank to bank because there were late rains and there is nowhere else to put the water. In the early light, a tiny, winged creature emerges from the water and takes flight. By early morning, there are millions of them swarming in the micro-thermals just above the river and banks. These are breeding clouds of midges, mostly males attempting to attract a female. The swarms waft with the breeze and finally alight to rest on whatever plant life happens to be handy. They are drawn to the light, white, the bright. A porch light on a warm evening could attract thousands of them. A lighted pool in a nearby backyard has a film of them that clouds the water. A white wall is coated and darkened, a dark brown wall next door, nearly barren of them.

Midges do not bite but they do annoy with their swirling swarms, often at perfect head-height in massive abundance because of their synchronous emergence. They do fly lower and higher but there are so many of them. An early morning runner could cough in the tiny-bodied cloud if not careful. On the slightly more positive side, if this were Michigan, where they do bite, such a swarm would strike fear, fight, or flight in all within view of it.

The proteinaceous mass that these tiny insects comprise provides the sustenance for other, diverse wildlife populations. They are a foundational block of the river’s aquatic and associated terrestrial food webs. From other aquatic insects to fishes and birds, even small mammals, the lowly midge feeds them all. A nuisance for human riverside dwellers is an absolute necessity for local wildlife.

The midge’s lifecycle starts with egg masses of few to many thousands per female, through four larval stages or instars, the last of which pupates, and from this an adult emerges. The adult flies live a few days to weeks depending upon the species. As annoying as the swarms may be, the height of emergence should be short-lived, generally in the spring and again in the fall. The aquatic forms persist for a few weeks to years and are bottom dwellers where they digest through detritus, helping to cycle organic debris, and they actually help clean the water we drink.

Other insects that can emerge from the Santa Ana River in great numbers include mayflies and mosquitoes. Mosquitoes are not so much of an issue in Orange County where the river flow is seasonal, and the channel is devoid of plant life. Mosquitoes do not lay their eggs in moving water, requiring pools, making do with puddles. Mayflies on the other hand can be nearly as abundant as midges under certain circumstances. These are slow-flying, lacey-winged beauties with two or three elongated tail threads, nostalgic reminders of summers on a mountain trout stream.

The dependence of other creatures on seasonally abundant midges in Orange County is singularly strong for insectivorous birds, particularly swallows. Swallows are aerial acrobats with wide, squat bills, and big gapes for oral insect capture in flight. There are four nesting species of swallows along the river in Orange County. Two of these, the Cliff, and Barn Swallows, build nests of mud under the bridges that cross the river. The other two, the Tree and Rough-winged Swallows are hole nesters.

There are thousands of swallows on the river in Orange County devouring billions of midges to feed themselves and their young. In 2020, for example, a minimum of 2,190 Cliff Swallow nests were counted in 16 colonies, mostly under street bridge crossings from Imperial Highway down to Katella Avenue. Their nests are gourd-shaped adobes with small side entrances. The adults gather on a nearby mudflat, harvesting mud by the beak-full which is masoned into their seasonal homes, one mouthful at a time.

The forest that once held cavities, housing nesting Tree Swallows, has been replaced by buildings. So, nest holes are scarce, but OCWD provides, monitors, and manages nest boxes along the river in Orange County, in part to help with insect control. Of 431 nest boxes available in 2020, 353 were nested within by Tree Swallows, producing 1,020 flighted youngsters. Since 2012, the OCWD nest boxes have produced 7,118 young Tree Swallows. One study reported that a pair of swallows feeding their developing five to seven young for 20 days took an average of 6,000 insects per day. That could put a dent in your backyard bug cloud!

There is no room left here to story on about the larger animals, coyotes, urban raccoons, and the like, so, that must be left to another tale or two. In the meantime, instead of agonizing over the inconvenience of pesky bugs, please marvel over the thousands of birds they feed and realize that without such a feast of insects, enough to bug you, the cycle could not continue. I hope your exhilaration over these iridescent avian beauties far outweighs the potential exasperation with their winged sustenance. I also hope that you hang a bird nest box or two in your yard if you live close enough to have river insects in abundance. You might try a bright white feature to concentrate your yard bugs, a light on a white wall. We shine a blacklight on a sheet to draw in the small local life, which works well enough for local invertebrate-fauna inventories.

It may be hard to share your space with so many pesky bugs, but still, life on the river really is great and midges help the birds!