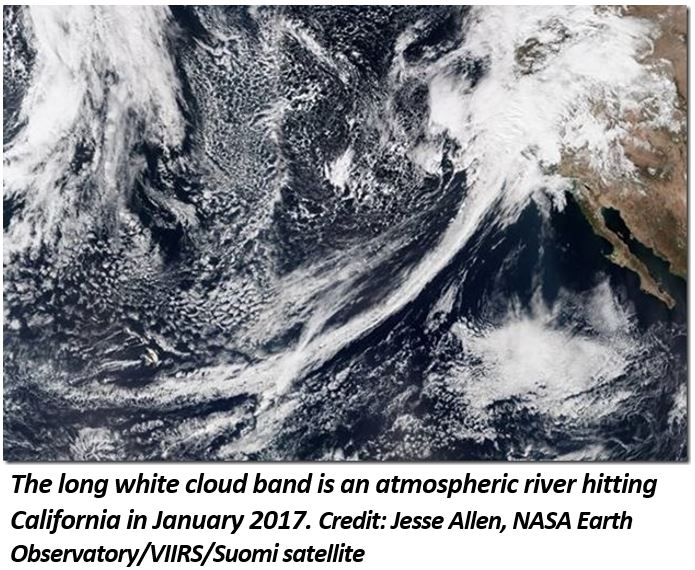 Remember when drought was the perpetual theme of the California water scene? Although we saw only 3.66 inches of rain locally for the July 2017-June 2018 water year, the 2018-2019 water year looks great. This year, we’ve seen more than 20 inches of rain!

We also saw incredible snowpack levels. Statewide, snowpack in May came in at 167 percent of average, according to the California Department of Water Resources. This is fantastic news for all of California after suffering one of the worst multi-year droughts of our lifetimes.

Though drought is out, the new big buzzwords in weather forecasting are “atmospheric rivers” or ARs. And, the California Department of Water Resources will receive $9.25 million toward funding for research into ARs in the 2019-2020 budget.

What are atmospheric rivers and why are they important to us in Orange County?

Atmospheric rivers are relatively long, narrow regions in the atmosphere – like rivers in the sky – that transport most of the water vapor outside of the tropics. The water vapor rises and cools to create heavy precipitation. They are a welcome source of rain to fill the Orange County Groundwater Basin, but there is more to the story—there is now an improved way to best capture all that rain.

Reservoirs currently capture some stormwater runoff, but established procedure requires dam operators to release much of that water to maintain space for flood control. Sophisticated weather modeling can provide accurate forecasts so that dam operators can have more flexibility in deciding to either keep extra water and release it during dry seasons or release it in advance of heavy rain headed their way. A new management strategy called Forecast Informed Reservoir Operation, or FIRO, could directly affect the amount of water held behind Prado Dam, located in Riverside County, which holds water for the Orange County Water District. With FIRO, an additional 6.5 billion gallons of stormwater could be stored during a wet year instead of being released. Keeping that water behind Prado Dam could eliminate the need to buy expensive water from Northern California and the Colorado River.

Benefits go beyond improved water supply security. Combine atmospheric river forecasting with a new approach to reservoir operations in California and we can optimize flows for fish populations, expand opportunities for groundwater recharges and provide additional time to prepare for flood conditions – including more advanced warning of large stream flows in burn areas.

It is inevitable that imported water sources will increase in price and become less reliable and we see no end to cyclical droughts. FIRO offers an additional water source.

There is evidence that FIRO works. During January in Northern California, the FIRO model was put to the test at Lake Mendocino. During the week of Jan. 14, an atmospheric river was accurately predicted and filled Lake Mendocino with nearly 2 billion gallons of extra water storage. The results of putting the FIRO model to the test make a clear case for supporting increased investment into improved atmospheric river forecasting. California’s environment, economy and communities will reap the benefits.

The District backs this innovative concept, along with four other California water agencies — Sonoma Water, Yuba Water Agency, Turlock Irrigation District, and San Diego County Water Authority. We have a goal to steadily expand the FIRO concept from demonstration to operation in California’s network of reservoirs.

Click here to learn more about this unprecedented research funding for Atmospheric Rivers and stormwater capture.