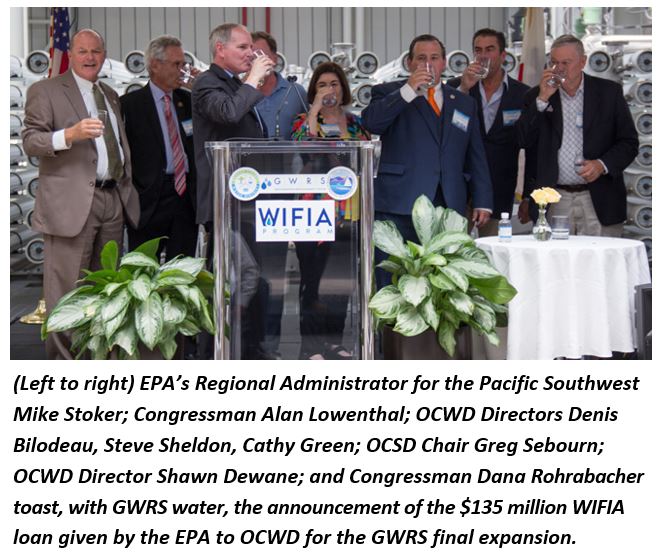 “This advanced water recycling and groundwater replenishment project will provide Orange County residents and businesses with an additional local drinking water supply,” said Stoker. “Not only will this project protect local water resources, it will make Orange County more resilient to future droughts.”

“WIFIA borrowing enhances the Groundwater Replenishment System’s viability,” stated OCWD President Bilodeau. “The WIFIA loan program creates another tool in the proverbial toolbox to finance critical water infrastructure projects like ours. The cost of borrowing is less than the private market would have been, which helps make the cost of the final expansion feasible to ratepayers. OCWD is trying to reduce reliance on imported water from the Colorado River and become self-sufficient, but OCWD won’t make water at any cost.”

The Orange County Water District estimates the project will cost $270 million. EPA’s WIFIA loan will help finance nearly half that amount—up to $135 million. Because the WIFIA program offers loans with low interest rates, the Orange County Water District is expected to save up to $16 million compared to municipal bonds. Project construction is expected to create 700 jobs and is scheduled to begin in 2019 and be completed in 2023.

In addition to significant cost savings, a WIFIA loan permits extended repayment terms of up to 35 years, the ability to repay at any time without penalty, subordination in payment priority to other debt, flexibility when the loan is drawn with no interest accrual until funds are disbursed, and the opportunity to use the loan with other assistance like the State Revolving Fund for the remaining 51 percent of a project’s cost.

“Having been a proponent of the OCWD’s Ground Water Replenishment System project since its inception, I am pleased that the OCWD has received a $135 million Water Infrastructure Finance and Innovation Act loan. This loan will help finance the final expansion of the GWRS, which will increase our drought-proof water supply and provide for the water needs of future generations of Orange County residents,” said Congressman Dana Rohrabacher.

“Today marks a major milestone for EPA’s WIFIA program,” said EPA Office of Water Assistant Administrator David Ross. “With our loan to the Orange County Water District, EPA has issued over $1 billion in WIFIA credit assistance this year, thanks to the hard work and dedication of the professionals within EPA’s Office of Water.”

Established by the Water Infrastructure Finance and Innovation Act of 2014, the WIFIA program is a new federal loan and guarantee program at EPA that aims to accelerate investment in the nation’s water infrastructure by providing long-term, low-cost supplemental credit assistance for regionally and nationally significant projects.

In April 2018, EPA announced the availability of additional WIFIA funding that could provide as much as $5.5 billion in loans, which could leverage over $11 billion in water infrastructure projects. The 2018 WIFIA Notice of Funding Availability (NOFA) highlights the importance of protecting public health, including reducing exposure to lead and other contaminants in drinking water systems and updating the nation’s aging infrastructure. Prospective borrowers responding to the 2018 NOFA must have submitted a letter of interest by July 31, 2018. EPA is currently evaluating submitted letters of interest from prospective borrowers in response to the 2018 WIFIA notice. Through this competitive process, EPA will select projects it intends to finance and invite them to continue the application process this fall.