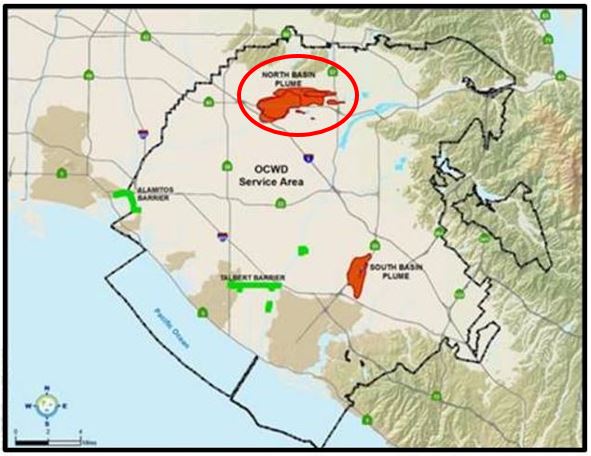 On Sept, 1, 2020, the U.S. Environmental Protection Agency (EPA) announced the addition of the Orange County North Basin Site (the Site) to the National Priorities List (NPL), sometimes referred to as the Superfund List. NPL listing serves as the basis for prioritizing EPA Superfund cleanup funding and enforcement actions. The Site includes parts of Anaheim, Fullerton and Placentia, and is part of the larger Orange County Groundwater Basin (Basin) managed by the Orange County Water District (OCWD; the District). The Basin is a regional asset that provides up to 77% of the water for 2.5 million residents in north and central Orange County.

“OCWD commends the EPA for taking this critical step forward to ensure the continued safety and reliability of our local groundwater,” said OCWD President Vicente Sarmiento. “This action falls within EPA’s core function of enforcement and compliance with the nation’s environmental laws and it will work with companies responsible for the contamination to clean it up instead of passing these costs on to ratepayers. This is a significant milestone for the District, and we look forward to cooperating with cleanup efforts to ensure the safety of our water supplies for today, and for generations to come.”

The Orange County North Basin Site includes a five-mile long, two-mile wide groundwater plume containing contamination from legacy industrial chemicals which have caused the closure of four city drinking water wells. The EPA’s listing of the Site is critical to control the plume from impacting even more drinking water wells.

As manager of the Orange County Groundwater Basin, OCWD has performed extensive groundwater investigations at its own cost to assess the area and depth of the contaminant plume. OCWD has also pursued litigation to compel responsible parties to pay for OCWD’s costs to address contamination that escaped from the parties’ properties.

In 2014, OCWD began a dialogue with EPA regarding contamination in the northern part of the basin and, in October 2016, OCWD and EPA entered into an administrative agreement under which the District committed to pay the cost of a remedial investigation and feasibility study (RI/FS) under EPA oversight to assess the extent of the groundwater contamination in the North Basin, and to come up with possible interim solutions to contain and remediate areas with higher levels of contamination. In August 2017, the state of California concurred with placing North Basin on the NPL and granted $1.7 million of Prop 1 money to assist with development of the remedial study. This has truly been a local, regional and national collaborative effort.

OCWD has a rich history of actions that it has taken to proactively address this contamination. It has collected geologic and groundwater quality information needed to characterize the extent of contamination and developed a computer groundwater model to evaluate different options to keep the contamination from spreading. These studies included the installation of approximately 100 monitoring wells and the collection and analysis of thousands of groundwater samples. OCWD technical work also included the installation of several extraction wells in North Basin, one of which is currently operating to control the spreading of the plume. While much of this work preceded the arrival of EPA, it has provided a technical foundation for the current RI/FS.

“Since 1933, through sound planning and appropriate investment, the District has demonstrated our commitment to keep our water supply safe and reliable for the residents and businesses we serve, and we will continue to do so,” added Sarmiento.

The Orange County North Basin Site is one of six sites that were added to the NPL. A complete EPA press release is available for more information and to view additional sites. OCWD’s website contains more information about the RI/FS and overall efforts to address the North Basin contamination.