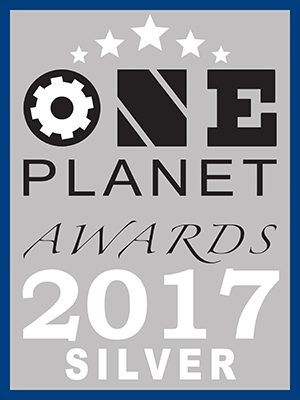 The One Planet Awards is a premier awards program honoring best in business and professional excellence in every industry from around the world. The One Planet Awards honors are currently conferred in category sections which include outstanding individuals, executives, teams, new products and services, PR, Marketing, and Corporate Communications.

The biggest detriment to building water reuse projects similar to the GWRS is the “yuck” factor that many communities can’t overcome. For this reason, OCWD and OCSD launched an outreach program 10 years before it came online with the project. Outreach and education remain a priority and that is why the two agencies were the first in the Western Hemisphere to bottle reused water for educational purposes. The GWRS Bottled Water Campaign, also known as the #GetOverIt campaign, was created to reach state-wide audiences with knowledge and the ability to taste the water for themselves and thereby overcome the biggest hurdle to new, local, high-quality, sustainable water supplies.

OCWD and OCSD, along with Dick Jones Communications—a public affairs agency selected to lead the campaign, chose a busy Hollywood tourist location to launch the campaign and educate the public about the state-of-the-art purification system and increase public awareness and acceptance of recycled water.

Using a custom-built “lemonade stand” with picture boards and descriptive brochures, the event was attractive to the general public in the active locale and to the reporters who captured interviews with Director of Water Production/GWRS Mehul Patel, staff speaking with passersby, and the reactions of the public drinking GWRS water.

Results included news stories on local television and radio stations, in newspapers, and online. Some broadcasts featured reporters providing some of the taste testing. Most importantly, the coverage showed consumer acceptance that day. “It tastes like water because it IS water” and “It’s good!” were repeated and reinforced the launch message.

The GWRS tour continues and information about the campaign and future events can be found at https://www.ocwd.com/gwrs/bottled-water-campaign/.

Learn more about the One Planet Awards at www.oneplanetawards.com.