The days are getting shorter, and nights are chilled despite the midday heat – Autumn has arrived. Minds wander on a blustery fall day, ghostly silhouettes move among the shadows, animated by the evening breeze. All Hallows Eve is near and in a young mind the anticipation intensifies with the growing darkness.

As a kid, Halloween was my favorite celebration of the year. We seldom got sweets and here was a night dedicated to candy for the asking, spookiness, and running wildly about the neighborhood, semi-untethered with buddies. Tough to design a better time, although the frequency needed work, once a year, come on! Older now and forced to act it, the past resurges each autumn, the haunted maze my son and I would build, the spookiness of the old tales and traditions. These musings are renewed by the changing season and colors, leaf drop in the Prado woods, where icons of this annual celebration dwell and the night-roamers get more than equal time now. Creatures of tale, legend, and folklore include bats, crows and ravens, owls, rats, spiders, toads, and more. They are storied attractors of the spirits, familiars of witches, and messengers of the underworld… muwhahaha! 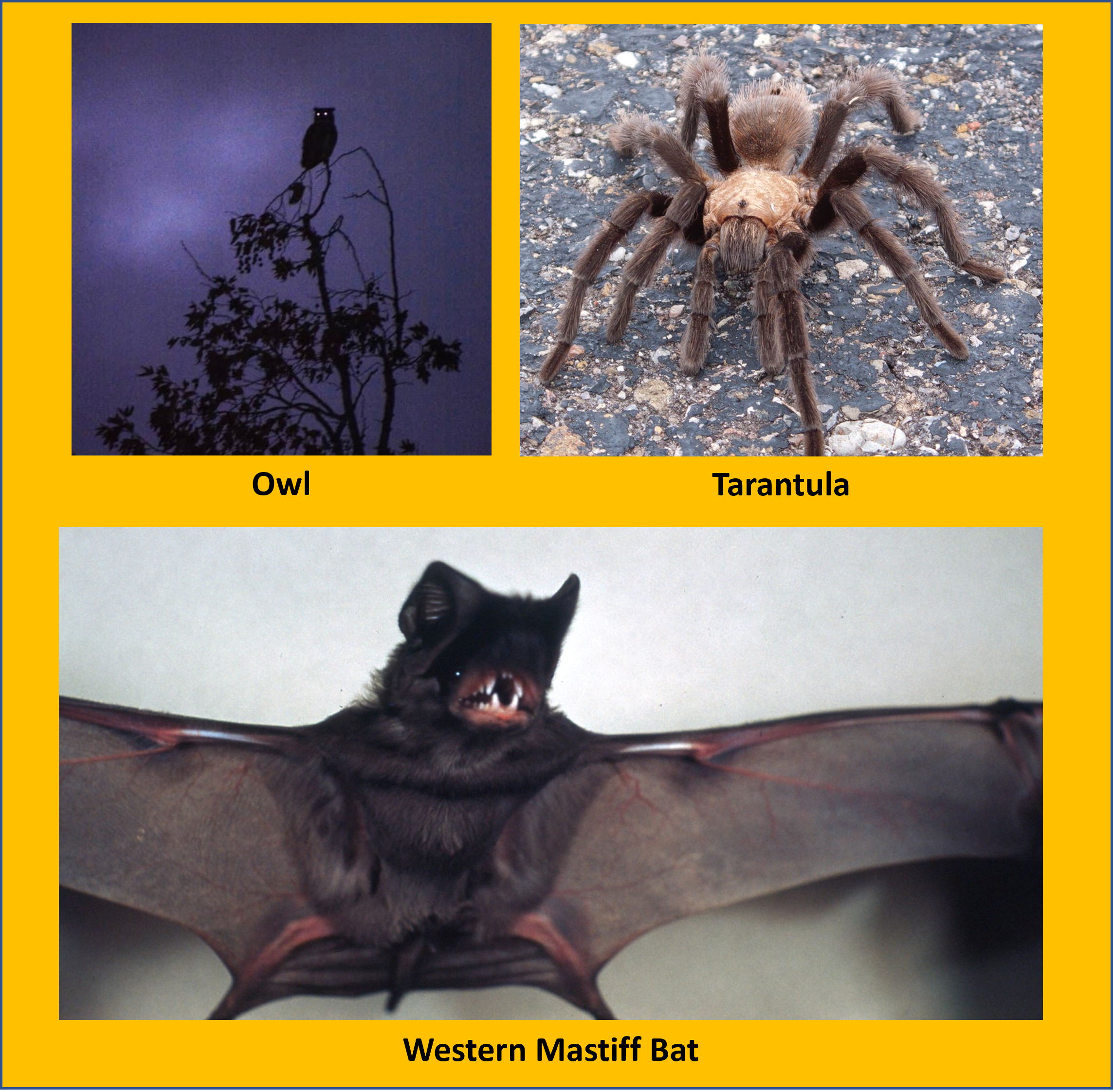 Bats pursue flying insects in the diminishing light while the weather holds, still supporting nightly insect flights; some may even break winter hibernation for a week or two during hot spells although they may not eat. They flutter after elusive quarry, dark colored, mousey appearing but winged; not a rodent, with prominent, some misshapen ears, vanishing and reappearing repeatedly like magic in the night sky. Scary tales link bats with Halloween, the most compelling involve vampire bats shapeshifting from bat to humanoid and back. Vampire bats do exist in the new world but largely south of the United States. They are too small to present much of a danger to humans and seem to prefer other animals. Our own neighborhood bats are insect-eaters and known for their fantastic ability to navigate in total darkness, even echo-locating tiny objects like flies and moths. They are the only mammal capable of true unassisted flight. There are 16 different species of bats in Orange County. The three most common are Yuma Myotis, Mexican Free-Tailed and Big Brown Bats. A Myotis lightly roils the surface of a pool as it snatches yet another emerging insect; Free-Tails are colonial rosters under major bridges over the river with thousands of bats in the larger groups, whereas the Big Brown is one of the most widespread and abundant bats in North America. The Western Mastiff is a cauliflower-eared giant, sporting a 22-inch wingspan, the largest bat in California. Bats are not blind, do not get tangled in human hair, nor do they attack humans draining them of their vital fluids, but they are ecologically essential for insect control.

A bat might occasionally eat a spider. Some spiders, particularly hatchlings travel through the air by silken parachute lines, called ballooning. Like bats, the spiders’ link to Halloween could stem from their usual haunts, as well as their fabled association with witchcraft. Waiting in darkened corners and webbed lairs to pounce on unwary prey, their eight-legged movements are quick and creepy, or they can be found hanging with a witch, up to no good. In reality, we are fortunate to have healthy spider populations for natural insect control, even indoors. I only wish there was a native species that would learn to relish Argentine Ants. It is all too seldom that I encounter our goliath, the tarantula, in the outdoors but this is a good time of year for that. Males march across their lands in the fall in search of a mate. Once mature, which takes several years, a male typically lives less than two years whereas females may live to see 40. Tarantulas eat a variety of invertebrates, mostly, but are eaten themselves by most predators. The deadliest of these, besides humans, is the tarantula hawk, a large wasp that paralyzes the spiders providing fresh food for its own growing young – macabre indeed.

There is nothing quite like the feel of a tarantula crawling on your hand, then up an arm, and unless an arachnophobe, there is little danger in such an encounter. They tolerate being held, usually, and are quite soft, being hairy and squishy until a retractable claw or two comes out while climbing you and then, soft turns into a bit scratchy. Although surprisingly soft, light, even frail, the eight-legged, pokey touch of a tarantula is no match for the softness of an owl’s feathers.

The fluffy edges of an owl’s feathers assist in their silent flight and render their plumage amongst the softest to our touch. Their nocturnal stealth, loud, eerie calls, large reflective eyes, and secretive predatory nature surely gave rise to their storied sorcerer companionship. The three common species in OCWD’s backcountry, also found in wooded neighborhoods in Orange County are the Great Horned Owl, Barn Owl and Western Screech Owl. Despite fables to the contrary, you are lucky to hear an owl and to have them nearby, mousing away. A screech or clicking from above, and flash of white undersides is a Barn Owl in search of food, hardly a witch in another form. The Screech Owl song is a short, accelerating series of whistled notes sequenced like a dropped ping pong ball coming to rest. The hoot of a Great Horned Owl sounds like a repeated “who” coming out of the darkness.

Night sounds are not always identifiable, even for a trained biologist. Think about early explorers, native people living much closer to the land, and the ancients before them. They did not have the vast scientific knowledge available to us today, amassed over the centuries to help identify and interpret the natural world. It is easy to understand how they may have concocted fables to deal with the many unknowns. There is also an exhilaration like none other that accompanies the fear evoked by being startled. Surprise, momentary terror, relief all wrapped into a moment. The wonder and doubt imparted by a good tale or spine-tingling thrill experienced in dark, startled surprise. But some of the stories, superstitions – come on, witches cackling in the night, shrieking as they transform from human to animal?

I have heard a cougar scream once in my life, over 50 years in the outdoors. We were bivouacked in the shadows of Mount Williamson on an unnamed lake and awakened bolt upright in the middle of the night by a woman screaming frantically for help. Her shrieks were pleading, terrifying. With slight hesitation since it was 19 degrees out, we three were up, dressed, and off to assist in minutes. We searched thoroughly the very spot from which her pleas must have emanated, calling out to her for more than an hour. That side of the lake was quite narrow, a vertical granite wall formed a bowl, magnifying her horrible wail. There was nowhere else she could be. Above tree line, there was naught but huge boulders, outcrops, and scattered mishappen whitebark pines, hunchbacked silhouettes in the dim light. Frantic to help but leery of the circumstance, and wary in the darkness, my heart leapt even higher when an owl flushed underfoot with a parting shriek. What was an owl doing on the ground and what was with that call? That was the only encounter with a living creature that night once the screaming had stopped. Searching the bowl and beyond in the light of day brought no satisfaction, no sign, no track, no clear answers. So, I’m certain I heard my first and only mountain lion scream that night, what else could it have been?