The days are getting longer, our first warm spell is upon us, a harbinger of wildflower fields and birdsong – Spring has sprung. A colleague recently relayed his children’s excitement watching a bat hunting through their yard. Well, Hummingbirds are displaying in my yard, raptors are screaming, wheeling and dealing overhead, birds are nesting – our favorite time of the year has begun. The bird show in my Orange County backyard is likely also playing out in yours. 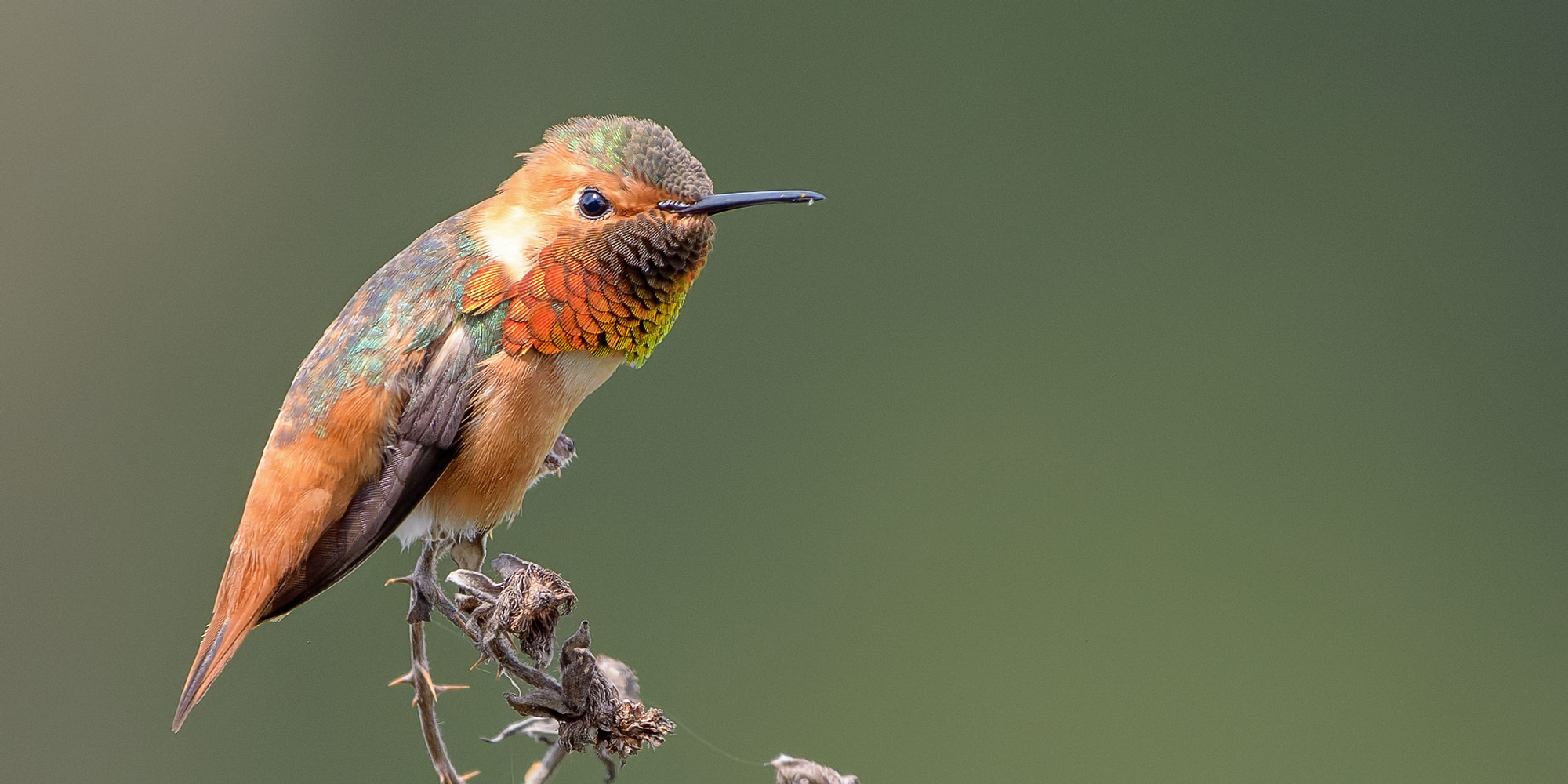 The Hummingbird display you are most likely to encounter is that of a male Anna’s or Allen’s Hummingbird. Males of both species have striking red iridescent chin feathers that are more orange in the Allen’s which also has an orange chest and undertail. These bright feathers show boldly when a perched male’s song attracts a female, rousing him into full display. The big show includes diving over a perched female which the Allen’s starts with a pendulum flight, sliding back and forth in the air in front of her with wind buzzing through its feathers as it swings. The dive display of the Allen’s produces a high, humming whistle; that of the Anna’s, an explosive buzzy squeak at the bottom of his 100-foot arc within inches of the female’s head. I heard the Anna’s “pop” and thought, it sounds like the alarm note of a California Ground Squirrel, one of our local hawk’s favorite foods.

There are three species of raptors, or birds-of-prey, who are locals in my Orange County neighborhood: Red-tailed Hawk, Red-shouldered Hawk, and Cooper’s Hawk. Red-tails sport a 4-foot wingspan and are the largest of these three. Although not as abundant as they once were, they are still seen often because they are so big. Adults sport that red tail, soar on outstretched wings, and call exuberantly when they are in full breeding display. The call is a high-pitched raspy scream that my son could duplicate until his voice deepened in middle school. These screaming, aerial acrobats can be seen diving, rolling in midair, sometimes locking talons, cartwheeling, and tumbling dramatically toward the ground. 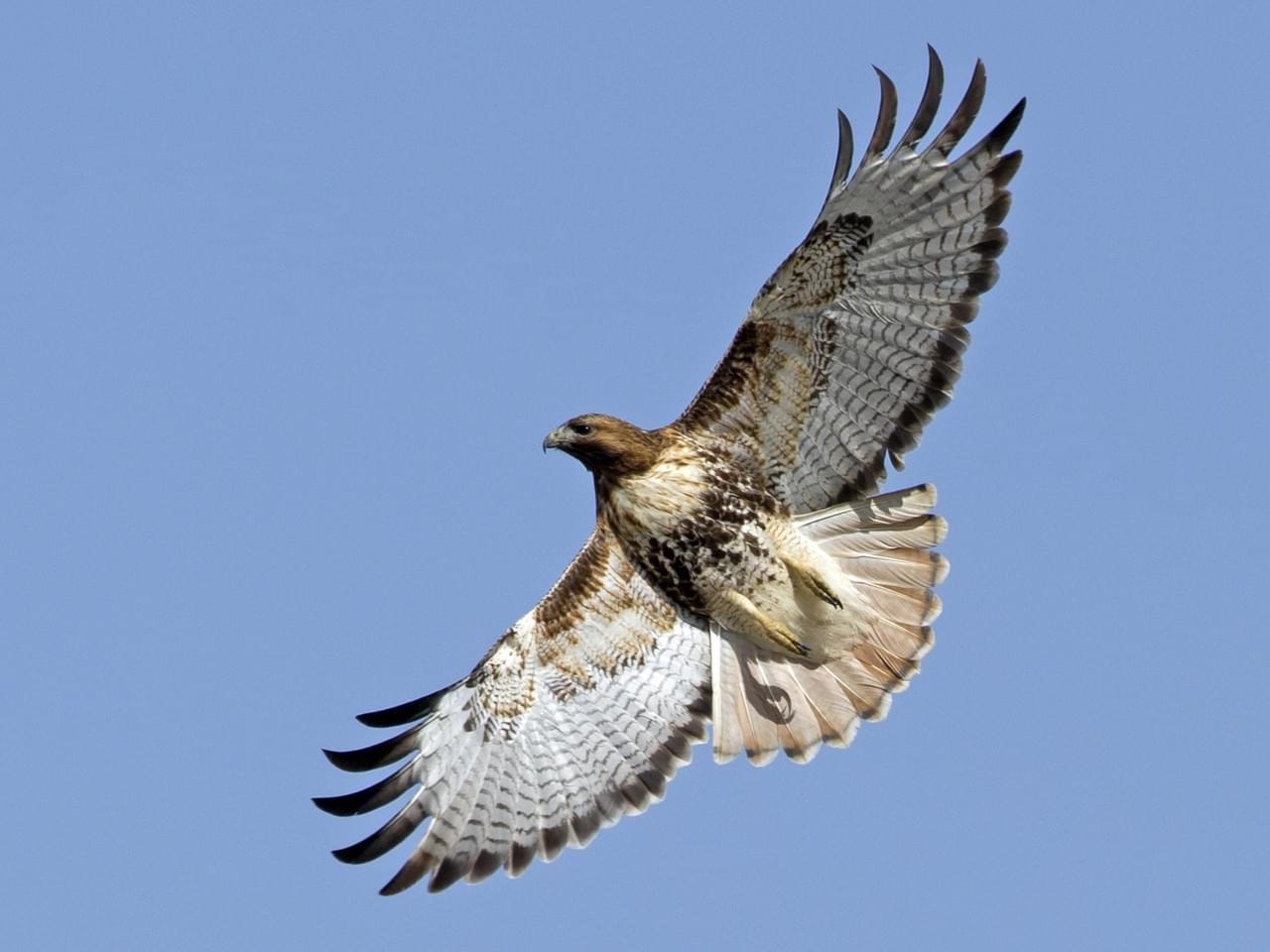 Red-shouldered Hawks are slightly smaller, more slenderly built raptors. Where Red-tails prefer hunting from a perch, with its longer wings and tail, the Red-shouldered Hawk maneuvers through woodlands after prey as well. What will catch your eye about a soaring Red-shouldered adult is the orange-red forewing and chest with banded black and white tail.

Cooper’s Hawks are the smallest of the three hawks with a 2.5-foot wingspan, orange and white striped and flecked chest and forewing, with a black and gray banded tail. They are bird hawks extraordinaire with kamikaze-like tenacity in the chase. I have been alerted many times to the deadly finish of a Cooper’s hunt by the crash of birds slamming through tree branches. Only one bird, the hunter usually emerges unscathed. I also have seen one cruise into a flock of Cedar Waxwings like he was one of them, casually grab one with an extended talon, and fly off.

The American Crow closely resembles a raptor but in truth, it is a perching bird, and today, one of the most common native urban birds. They are extremely clever animals and generalist feeders. Their numbers have grown so large that it is a mystery why they have not suffered through their own pandemic, given bird flu and all. Extremely social birds, they are in close contact with hundreds or thousands of their own, gathering daily at communal roosts or capitalizing upon shared human-provided bounty. They have taken over avian domination of the urban Orange County environment to the detriment of smaller birds that fall prey to them.

Caw was a crow that adopted me as his companion at the age of 10, my first real bond with another creature. My friend on the next block had raised Caw from a hatchling from a nest inadvertently extracted by tree trimmers. She loved that bird, but somebody left the door open and out he flew. Even with the lure of peanuts, I could not get him back inside with his foster parent. Instead, for a few weeks he followed me everywhere I went, riding on my shoulder or cruising near, as I peddled along on my Schwinn. He would wait in a tree outside my classroom, caw loudly at the sound of the recess bell, and fly down for a peanut unless other kids were too close. On a random day, as with most brief wild encounters, Caw was simply gone. I like to think he paired up with another local black beauty.

Partly because of these corvidae’s dominant cleverness, there are fewer individuals and kinds of other small birds nesting in our yard today. Even the ubiquitous urban dweller, the Northern Mockingbird, seems to be fewer in numbers. Mockingbirds and their midnight songs once resounded through most Orange County neighborhoods. They are certainly still there but fewer in many locales. Their basic song is admixed with sound bites from their surroundings. They mimic frog calls and other birds, but also car alarms, a door slamming, or maybe a siren. Insomniacs may resent their nightly serenade, but I and others find it soothing. Well, minus the loud lawnmower imitation.

Other yard songsters include nesting Mourning Doves, House Wrens, Song Sparrows, and California Towhees along with several non-native pests like House Sparrows and House Finches. Mourning Doves call as if mourning the loss of a friend. They know nothing of the artfully crafted, tightly woven nest of the hummer and most other birds. They do not bother with more twigs than absolutely necessary in fashioning their scant nests, and they may finish a build in a single morning and place it wheresoever they please. A hanging flower box will do just fine, or right next to the front door, no problem. They lay few eggs, usually two, but make up for the lack of craftmanship and eggs in the meticulous care taken of their young by both parents and in raising multiple broods, up to six in a single season. They are granivorous, eat only seeds and produce a rich crop milk that is fed to the young. Although born nearly featherless and quite helpless, with such high-quality nutrition and care, the young are flighted about two weeks after hatching.

One of my favorite yard birdsongs is that of the House Wren, a small, busy insectivore. Their rolling rattles and trills are bubbling and quite melodious. These tiny brown and gray beauties sport black pinstriping on the wings and tail. They are cavity-nesters that readily take to well-placed boxes. Be advised, however, that your yard is theirs once claimed and they will fiercely scold your intrusion.

CLICK HERE TO HEAR A SOUND FROM A HOUSE WREN

Revel in the renewal that comes each spring, that annual calling to flourish. Our yard birds have told us that it is time once again, prepared or not. Know and enjoy them for their unique look, flash of colors, sounds, antics, and the singular jobs they each do, during the little lives they live. There are wild secrets to discover just outside your door!