Our team was out in the Prado Basin this May with Dr. Pete Bloom and crew, banding raptor young just before they fledge, attain full flight, and leave the nest. Barn Owl babies are gangly; Redtails, if given the chance, will rip digit, maybe limb with those strong, sharp, vice-gripped talons, but not with the meat-cleaver bill, go figure; young Screech Owls are just darling, little gray fluff balls with giant eyes and tiny talons. The banding adventures were great, especially watching Dr. Pete’s eco-climber scale into the Redtail’s nest, 80 feet off the turf! But our main mission that day was to monitor the Eagle’s nest from a safe distance to determine progress. Perhaps you hadn’t heard, but there are Bald Eagles nesting in the Prado Basin! 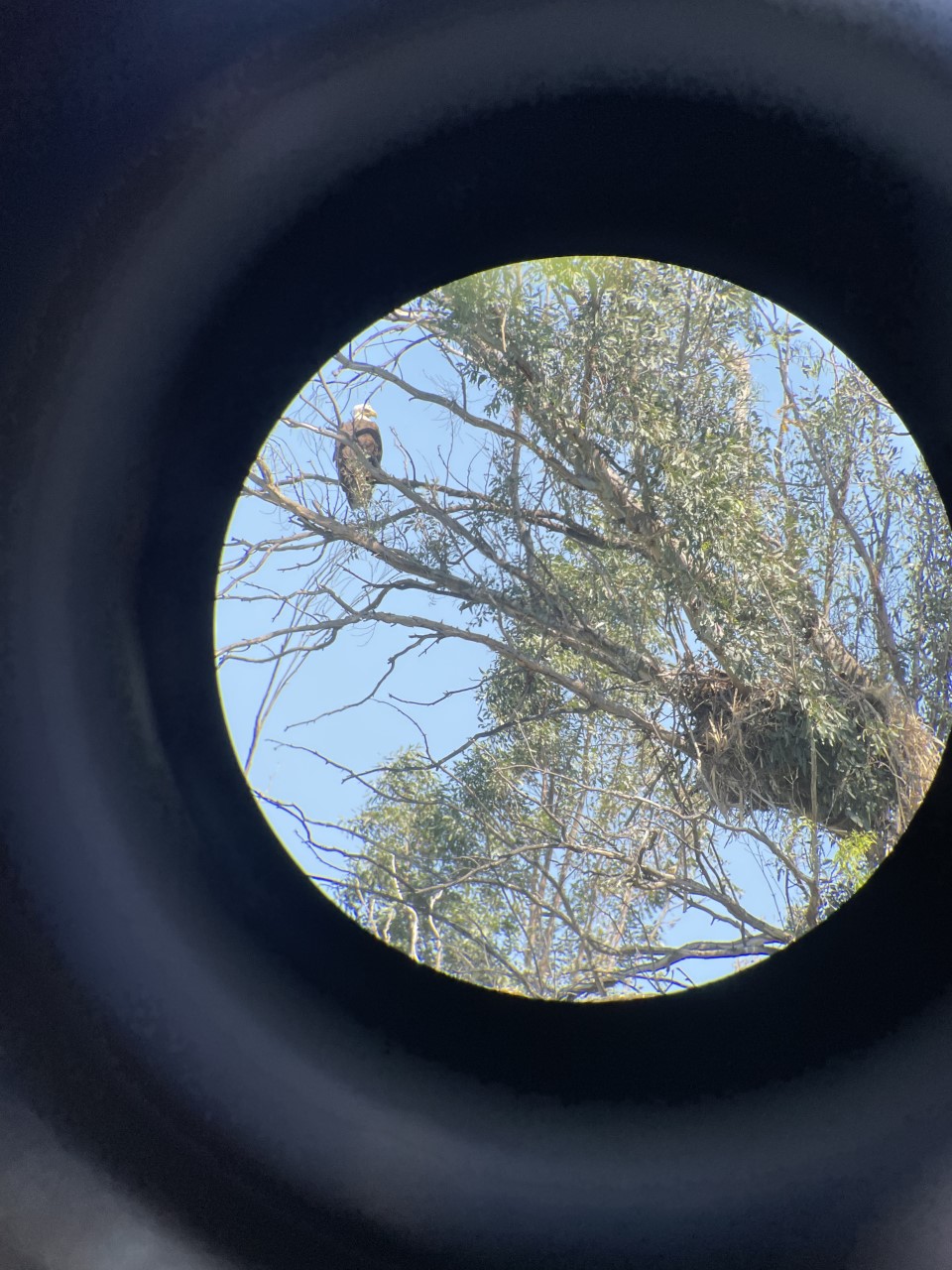 The walk to a good vantage point was a brief 20 minutes. We set the spotting scope and watched the Eagle nest for a few hours, distanced by several hundred meters. Highlights were few, mostly the adult’s head, but still exciting. The adult was sitting higher in the nest than it had been… had the egg hatched? Our question was answered when an eaglet head popped up briefly. We wandered off on a short break and the second adult flew up from one of the west ponds and circled overhead; Bald Eagles are impressively huge when experienced that closely! The brooding adult may have witnessed its mate’s flight, so it left the nest, then dove on a Redtail perched too close. The Eagle with its 7-foot wingspan, dwarfed the hawk. This was likely the beginning of a nest exchange, the regular swap of brooding duties. When the returning bird neared the attending adult, it was clearly the larger. Female Bald Eagles can be 30% larger than their mates and do most of the incubating. Both male and female adult Bald Eagles have a striking white head and neck, and exceptionally large hooked, yellow bill.

A recent news clip announced that Bald Eagle populations have quadrupled in the lower 48 states since 2009! From a low of 417 nesting pairs in 1963, there were 71,400 pairs in 2019. This follows decades of protection, banning Dichlorodiphenyltrichloroethane (DDT) in 1972, and conservation efforts that included egg swapping and eaglet fostering on the Channel Islands. The female of the pair nesting in Anaheim Hills beginning in 2018 hatched on Santa Rosa Island in 2013. Female 85 and many other eagles in Southern California today owe their survival to management efforts that included captive breeding, hatching eggs in an incubator, otherwise doomed to failure from shell thinning, a biproduct of DDT ingestion and accumulation with fish-consumption, and then swapping the replacement, dummy eggs with eaglets that were safely hatched in a facility.

Thanks to these efforts, there are certainly many more sightings on the Santa Ana River today and in Orange County in general. Eagles have nested successfully at Irvine Lake since 2011 but the first young out of a Southern California nest unassisted by humans since the 1930s was on Lake Hemet in 2002. There is a 24/7 webcam on the Big Bear Lake and some 5,000 enthusiasts enjoy the action at a time. The Big Bear nest sits 120 feet up in a Jeffrey Pine, the home of Jackie and Shadow, as it undergoes annual refurbishment, currently measuring five feet thick and wide. Eagle nests that have been in use for long periods can weigh 1,000 pounds or more. The Prado nest is perhaps four to five feet across and two to four feet thick.

The Bald Eagle’s preferred dietary item is fish but roughly half of what they consume is scavenged, often from smaller predators, but even from landfills. Prado is full of fish, most of them quite small but our Carp get big enough to feed a growing eaglet. As a matter of fact, there was a Carp in the nest when the eaglet received its health exam. 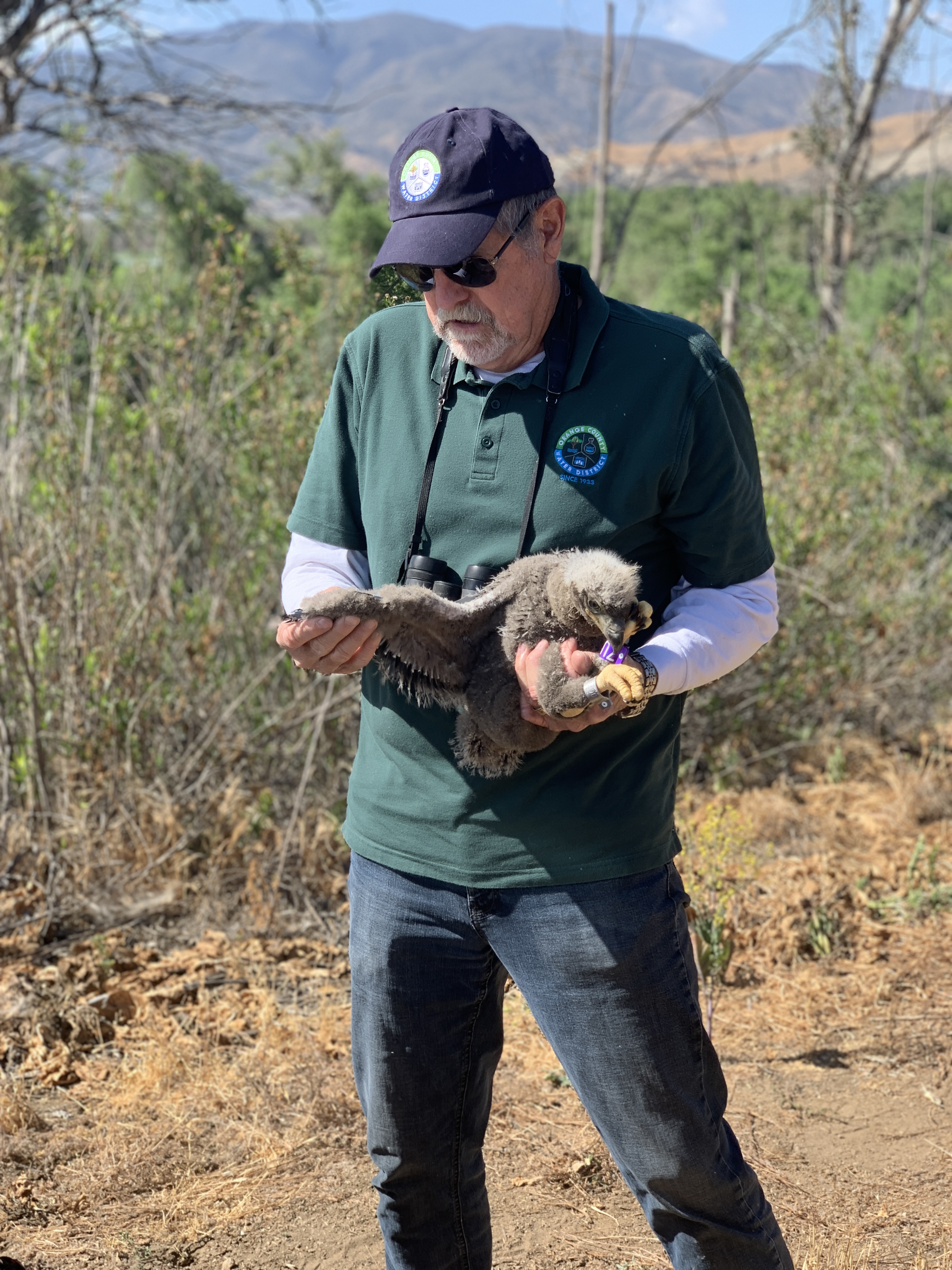 It was with good intel that we returned to the Prado Basin in late May with Dr. Pete, his eco-climber, and the Natural Resources crew to examine and perhaps band the eaglet. The climber brought the eaglet safely to the ground for an exam that included banding, and collection of a few blood feathers for genetics and contaminants analysis. At about 4 weeks old, the young eagle was downy gray, bulky, and lethargic with full fat stores, a testament to the adult’s hunting skills and prey abundance in Prado. The bird was banded with an alpha-numeric, purple band inscribed ZU1 in white on the left leg. The eaglet was quickly and safely returned to the nest, to the relief of its parents circling and calling high overhead.

By the end of the second week in June, the eaglet was still in the nest but looking browner and much larger. A Bald Eagle egg hatches after about 35 days of incubation but the chick is nest bound for an additional 10 – 12 weeks before attaining full flight. It will remain fairly tied to the nest vicinity for a month or more after first flight, being fed by the adults until able to hunt for itself, perhaps by early fall. As an adolescent, most birds travel for the first four years of their lives, attaining full adult plumage and settling by the fifth year.

In 1782, the Continental Congress made the Bald Eagle the national emblem, the living embodiment of honesty, courage, and power. One hundred and fifty years later, this National Symbol was on the brink of oblivion due to shooting and poisoning. People cared, rallied, and a thundering conservation success story ensued. As a result, the Bald Eagle was taken off the endangered species list in 2007. Today, our own wildlife haven, the Prado Basin, supports a breeding pair of these magnificent birds, and their first youngster is about to soar – you go ZU1.