Some of the river bottom lands where OCWD manages water are true wildlands. Natural Resources staff are there daily, in part to monitor and study some of the creatures that inhabit our land. Physical proximity between staff and wildlife are commonplace, and actual contact is rare but sometimes necessary. Discarded fishing line inadvertently becomes a snare; big birds occasionally slam into overhead lines; the rescued often don’t recognize that they are being rescued; the edge of a draining basin turns to quicksand; the depth and current of a weir box are too tough to navigate for the young; and a makeshift water well becomes a pitfall trap. Sometimes you just can’t not touch!

Pelicans Caught in Fishing Lines
An anonymous newsflash went out of a pelican caught up in fishing line down in Prado’s west ponds. We scrambled off to check it out and discovered that there were actually two pelicans linked with line. Unfortunately, the line was tied such that every time the first bird tried to take off, the second was pulled under water, keeping the first bird earthbound while putting the second at risk of drowning. We hurried back to the office to get a boat but by the time we returned, our heavy equipment operator, Chris, had waded out to rescue the birds. He was able to free the first bird which flew off immediately but only a short distance, where it sat recomposing itself. The second bird was in bad shape, so it was taken to the wildlife care center – where it survived.

Another White Pelican tangled in fishing line, again in one of the west ponds, had its bill bound to one wing, keeping it from foraging or flying. The bill was very pale, the bird undoubtedly stressed and malnourished. Two of us jumped out of the truck and into the pond forgetting the December cold, until we hit that icy water! We waded out and threw a jacket over the bird to calm it with confinement while working to remove the line that had cut deeply into tissue. Mistakenly freeing the bill first, it of course defended itself, bill first. With such a sign of strength and survival instinct, the bird was freed onsite but monitored. It stayed in the same pond for a day or two and then it was gone. We were quite chilled but thrilled with the outcome. 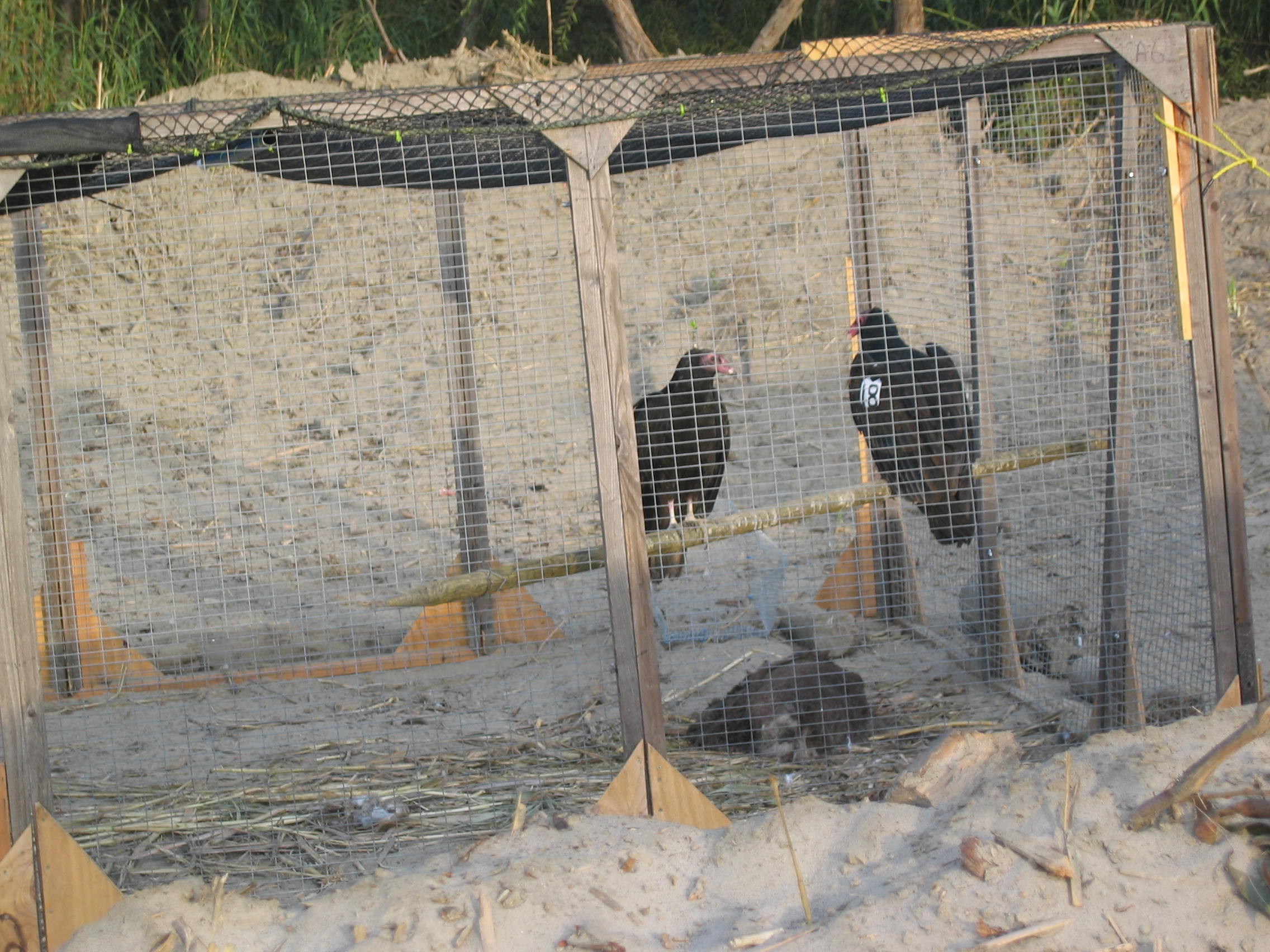 I spotted an injured turkey vulture up north of Prado but was unable to catch it on my own. Even with a broken wing, the bird was faster on its feet than I. Later, with more of us coming in from all directions, I was able to throw a blanket over it. We kept it in a cowbird cage for a couple of days until permitted rehabbers came and picked him up. Upon capture we had retrieved and thrown him a fresh road-killed racoon. He must have been starving, diving into the carcass before we could even close the trapdoor.

Cormorant Spotted During Fish Restoration Project
While working our fish restoration project in Sunnyslope Creek, we found an injured Cormorant which I wrapped up like a burrito in my shirt in preparation for the trip to the rehabbers. Both my arms were occupied with containing the bird and I watched in horror as it worked its bill free. Unable to get the words out fast enough for help, it clamped down on my nose, puncturing both sides. While taking several minutes to pry the bird off my nose, there was lively contemplation of the relative value of my nose over the bird’s neck. Disregarding my story, the urgent care staff considered my case a nose-piercing “DIY” gone horribly wrong.

Misguided Gopher Snake
We once spotted a large gopher snake crossing a busy road in north Prado. We parked off the roadside and successfully hurried it across lanes, only to have it tangle itself in and out of the chain-link fence on the road edge. Our bad, they can perish that way. Understand that young gopher snakes are usually docile, but we call anything over 4 feet long bull snakes since many that size bull their way through life like this one. They coil, strike, hiss, and even fake rattle. We spent far too long freeing our misguided slinker while narrowly avoiding those tiny but numerous, sharp teeth.

The Tale of Two Turkey Vultures
When Burris Basin was being drained for the reconfiguration project, a call came in about a large struggling, stuck bird. Upon arrival, we saw a turkey vulture clearly stuck in the mud, struggling to stay upright. The mud was too soupy and deep to hold a would-be rescuer, so we tried using two foam pads, which was all we had at hand. I, being the slightest person in the group, was chosen to shimmy out on the pads, repositioning the extra in front as I inched along.

As a safety precaution, my sidelined cheering squad tied a rope around my waist and off I went. Once close enough, I realized that two vultures were stuck. The bird we could see, the female was standing on top of a second bird, a male to keep from sinking (sound familiar?). Eventually, the male went completely under. I reached the female and shimmied her back to the team. It was slow going, crawling through muck, and I feared about finding the second bird again and his chances. When I finally got to him, he was unresponsive. We cleared mud from the birds, as best we could and headed back to the office where a renowned raptor biologist would be waiting. At one point on the ride back, the male moved slightly. He was alive, but barely. At the office, the birds were rinsed clean inside and out. The raptor vet who worked on them thought that the male had taken in so much internal sludge that it would likely develop respiratory problems or an infection, but happily, both made full recoveries, were banded N8 & N9, and were released in Prado.

A Wood Duck Hen and its Chicks
During a Saturday tour of the Prado Wetlands one spring, we came upon a wood duck hen calling frantically and swimming about, not quickly flushing like usual. Investigation revealed several chicks stuck inside a weir box. The tour went on break, I raced back to the office for a pole net with which I pulled out a half-dozen little fuzz balls and returned them to their frantic mother. The hen’s continued squawking told me there were more, so I lowered myself down into the box where several chicks had been sucked into the adjoining pipe. I got them with the net and returned them to an anxious mama. The family intact, she led them over to a safe bank where they preened and rested after their big ordeal.

A Surprise Visit from Alligator Lizards

An Arundo control crew working near the diversion channel in Prado discovered a large hole, maybe 3 feet across and 8 feet deep with 6 inches of water in the bottom. They reported seeing a lizard or snake near the bottom, trapped. Upon arrival, I saw that it was a large alligator lizard hanging on in the depths of the hole. While climbing down the ladder I brought to nab it, I found many more lizards that had fallen in and were stuck on small ledges or in tiny depressions. I rescued about a dozen alligator lizards and a couple western fence lizards from that one hole, surprisingly all still alive. Their lethargy meant that they had been in there without food for quite some time and a few were nearly done. Once cleared of critters, the hole was filled.

Several lessons were learned from this and many other similar encounters: people unknowingly set wildlife traps; rescued animals are often ingrates, so watch your eyes, nose, and fingers; pitfall traps are dangerous to wildlife; and you really should have confined space training before spelunking, but hey, you gotta do what you gotta do, don’t ya?