Decorated evergreen trees and foliage have been part of winter celebrations for centuries. People once lived in intimate association with the land, adapting by season, the most trying of which was winter. With adequate provisions, folks endured the cold prevailing darkness and were reminded by the enduring green life that the bountiful renewal of spring was imminent. The Christmas tree, mistletoe, and evergreen wreath are all associated with winter celebrations that are renewed annually, tweaked variously by different cultures over time.

The first Christmas trees were adorned in the U.S. by German settlers around 1830 and the practice was popularized by the early 20th century. Today, about 3/4 of Americans celebrate Christmas with an ornament and light-adorned tree, 80% of which are artificial. The live trees that are harvested for Christmas are mostly grown for that purpose in Oregon, North Carolina, and Michigan. Popular trees include Douglas and noble firs, Scotch and Virginia Pines, and blue spruce, among many others. Some tree farms in southern California specialize in Monterey pines, natives of coastal northern California that sport long, soft needles, a deep green color, and rich pine fragrance.

Native conifers all but disappeared from the southern California coast centuries ago. Coniferous forests are abundant in the mountains of California where species vary by range, elevation, latitude, soil type, etc. Three species that grow in inland Orange County’s Santa Ana Mountains are knobcone pine, Coulter pine, and big-cone spruce. The single remaining south costal pine, the Torrey pine survives tenuously in San Diego County. This is in stark contrast to the historic abundance of conifers in coastal Orange County during the Pleistocene when the cooler, wetter conditions then supported forests much like the current woodlands of the Monterey coast.

Torrey pines are also cultivated in some California landscapes such as Conrock Basin where we recently planted them as part of OCWD’s habitat restoration efforts. These are southern California natives that no longer regenerate on their own this far north, as it is too hot and dry. These conifers produce ample sap, allowing them to fight off invasive beetles that are killing off many of our other riparian trees. The beetle, the polyphagous shothole borer, was an accidental import from Asia but that is a whole other story. We will see how these transplanted Torrey pines do with the extra water available in Conrock – hopefully well.

Should you want to see the rarest pines in California on their home grounds, a visit to the Torrey Pines State Natural Reserve on the San Diego Coast is one option. The 1,750-acre state park includes miles of trail and spectacular views of the coastline from atop 300 foot, deeply eroded bluffs and walks along secluded beaches, at lower tides only, just above Black’s Beach. Wildflowers and wildlife abound with deer sightings, rare coast barrel cacti and five unique types of native succulents called live forevers, some perched oddly on ancient rootstocks, eroded by wind and water. If you go now through mid-April, scan the ocean for migrating California gray whales which are regularly sighted from the bluffs. The reserve bluff tops comprise some of the best perches for cetacean sightings in southern California. If you want a local hike to rare conifers, look for Tecate cypress up the Cole or Gypsum Canyon trails, hiking up into the Santa Ana Mountains from the river or neighborhood to the east. These are the northern-most stands of these cypress, tiny remnants of the ancient closed-cone forests that once dominated there. Should you go, look for toyon, also called Christmas berry in fruit with bunches of red berries. There will also be a handful of winter-blooming plants like the blue-flowered chaparral aster, our only local blue sunflower. 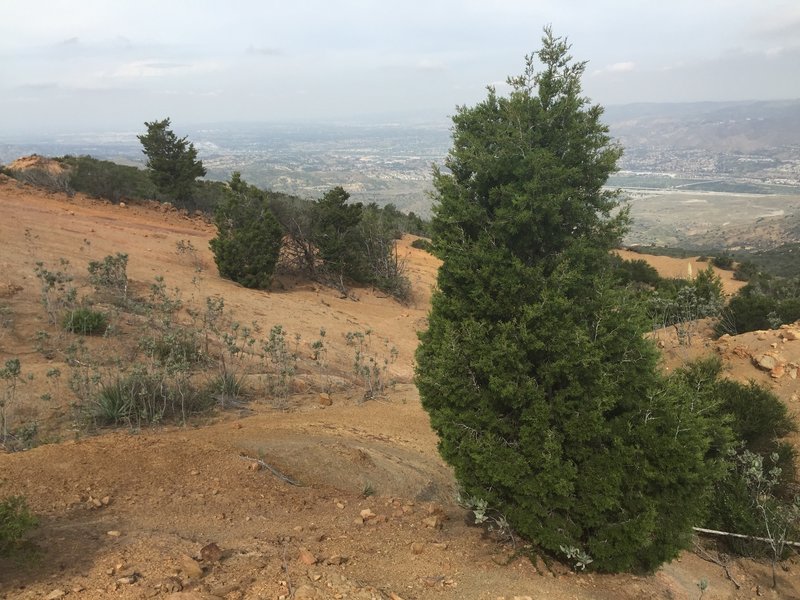 Look closely at a pine tree and you may see odd-looking clumps of foliage, twiggy, often more yellow, or brownish than the pine needles. This would likely be dwarf mistletoe, an entirely parasitic plant that takes moisture and nutrients from the host tree. This kind of mistletoe has tiny, scale-like leaves and usually does little to diminish the tree’s health unless there are other complications. Our mistletoes are generally planted by birds that eat the berries and deposit the processed sticky seeds on other branches. The seeds then germinate when it rains. Dwarf mistletoe is unique in that it also shoots ripened seeds at speeds of up to 60 miles per hour and distances of 40 feet. Accidentally grabbing a clump of dwarf mistletoe containing ripe berries, or purposely instructing a companion to do so, can result in enough change in humidity that the berries fire their seeds, resulting in a sicky, gooey mess in your buddy’s hand. However, also be aware that mistletoe foliage and berries contain phoratoxin and viscotoxin and are toxic to humans.

The mistletoe that is collected and used at Christmas to ambush the unwary with smooches in the doorway is a green, leafy species that is only partly parasitic. This is the mistletoe that grows on our willows and oaks at Prado but is more common and easily distinguished on western sycamores. As a boy scout, a few years back, my buddies and I would climb to collect the mistletoe, bag it, and sell it to raise funds for our other scouting activities.

Gathering family and friends around the evergreens, decorations, ornaments, and lights in celebration of Christmas is a nostalgic tradition in many households. The greenery we incorporate is another seasonal link between us and the wild. Those very evergreens in the outdoors provide essential cover and food for many animals. Mistletoe and holly berries, although harmful, even toxic to people and pets, are a necessity for many species of birds, particularly in winter when food is scarce. Deer browse pine needles, buds, flowers, young growth, even bark under certain circumstances. The champ of the bark munchers is the porcupine. Pine nuts are favored by most small forest mammals, many birds, and people. Thoughtful consideration of our fellow wild creatures should allow us to continue our evergreen harvest sustainably for centuries to come. Have you heard about the latest fad in Great Britain, renting a live Christmas tree? It is also available here.

Along with a wonderful gathering and feast with family and friends this year, how about spending some time outdoors too, hiking through the evergreens on the trail? Merry Christmas.