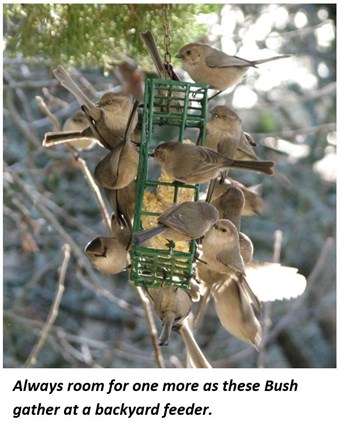 A practicing wildlife biologist by choice, a naturalist, if you will, I took great issue and still struggle with the concept of people drawing birds into backyards with food. Do this with young wild creatures and they imprint, developing behaviors that are often not in the best interest of their long-term survival. Feeding birds is part of today’s lifestyle in Southern California, but this can lead to problems with too many crows in neighborhoods, to the demise of smaller nesting birds; gulls and grackles defiling cars and people in parking lots; huge flocks of gulls spending more time at city dumps than the beach; majestic Canada Geese that once were iconic symbols of wildness now begging, and no longer migrating. Yet, there are millions of people with bird feeders and 30 – 40 million people purchase bird food every year.

Before committing to a bird feeder in my own backyard, I visited the Big Morongo Canyon Preserve in the Little San Bernardino Mountains of Morongo Valley, Tucker Wildlife Sanctuary in the Santa Ana Mountains of Orange County near Modjeska Canyon, the Ronald W. Caspers Wilderness Park off Ortega Highway in San Juan Capistrano, and others. These treasured sanctuaries have multiple, established feeders and offer the recommended food varieties, water, escape cover, appropriate upkeep, and viewing opportunities for the public. 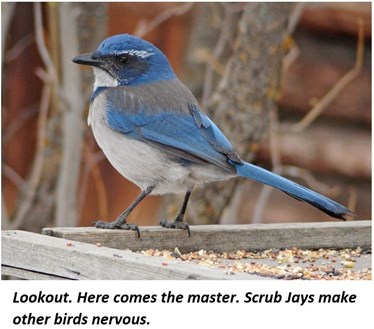 Real wildlife drama unfolds there before your eyes, in miniature, albeit on some days only with patience. At certain times of the day, in season, the activity level can reach a crescendo with too much happening to follow. Dozens of species and hundreds of individuals can be encountered as they vie for position, ever wary of perceived and real threats. Their colorful little bodies flashing in and out of view, in technicolor; brilliant blue of the Western Bluebird; red, black, and white of the Nuttall’s Woodpecker; yellow, greens, black, and whites of the Warblers; there’s a constant anticipation of the unexpected, perhaps a Nuthatch will sidle in, moving as much like a mouse as a bird down the adjacent Sycamore trunk. A symbol of peace, the Mourning Dove is a grey-cloaked bully with the smaller visitors. The clever Western Scrub Jays make everyone nervous but the American Crow rules, except when a Cooper’s Hawk intent on squab dives into the melee. Then, the feeders clear in a flash.

At the Orange County Water District (OCWD; the District) we are engaged in habitat and wildlife management that includes restoration for natural bird feeding, primarily in the wetlands behind Prado Dam in Riverside County. The District also created a 3,500 square-foot island that is a favorite nesting spot at the Burris water storage basin in Anaheim. These efforts provide niches that are self-sustaining for healthy populations including rare, threatened and endangered species. The work of OCWD and its partners has fostered the recovery of several bird populations in the Santa Ana River Watershed. Visit our website (ocwaterdistrict.mystagingwebsite.com) and book a specialty Prado Wetlands tour during the spring to view our native bird population.

Establishing a backyard feeder and a wild bird theater is involved; there are right and many wrong ways. One does risk ethical violations and serious consequences, like attracting multiple hummingbirds, who become dependent, to your yard and then leaving on holiday in the dead of winter when they rely on you most. With that word of caution, please go forth, establish a feeder for wild birds in your yard, keep it well stocked year-round and think about giving your feathered friends native cover as well. I suggest visiting Cornell University’s Lab of Ornithology (www.birds.cornell.edu) for advice on feeders and the California Native Plant Society (www.cnps.org) for native plants.