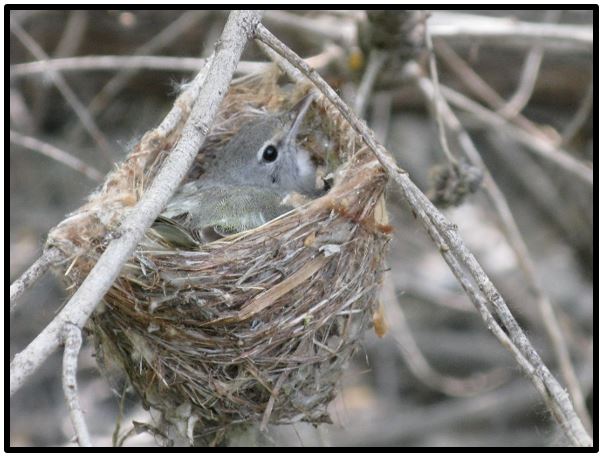 The least Bell’s vireo (vireo; LBV) was presumed to be gone from the Santa Ana Watershed, until I found a small breeding cluster of 12 territories on Temescal Creek circa 1983. At the time, I was working with the Orange County Water District (OCWD; the District), documenting environmental baseline conditions for the Santa Ana River Mainstem Flood Control Project on behalf of the U.S. Fish and Wildlife Service and commissioned by the U.S. Army Corps of Engineers.

This remnant endangered population was inside the Prado Basin, near Corona Airport where water flowed in Temescal Creek during many months of the year. Treatment ponds were still active then, helping to keep the creek alive and the vireo nests I found that year were, in fact, associated closely with a flowing braid of the creek.

Finding these little riparian dwellers was easier than becoming a vireo biologist. The expertise was held in a tightly knit little circle of fairly unique individuals. There were very few permitted vireo biologists, fewer paying jobs for that expertise, and only guarded communications among the lot, giving good reason for wanting to steer clear. However, I was thrust into the Prado Basin to report what lived there in order to protect significant resources. The struggling vireo population could be impacted by yet another phase of flood control activity, and, by golly, as a federally blanket-permitted, brand new field biologist, I was going to do my job.

Vireos are small perching birds that eat insects. They come north from their winter range south, at least as far down as Baja, to breed in California from San Diego to the Sacramento region. There are 15 different species of vireos and most look remarkably similar: small, stocky, gray and white birds. The LBV is generally gray above, whitish below with faint white wing bars and a white spectacle pattern around the eyes; its song is distinctive and the males are generally very vocal.

Our endangered vireo nests and feeds in riparian, streamside habitats. These birds became rare because 90% or more of their wetland habitat was lost—converted to agriculture, floodplain development, urbanization, and the associated flood risk management. In addition, they fell victim to a recent arrival in Southern California, the brown-headed cowbird, a nest parasite.

The female cowbird lays up to 90 eggs per season in the nests of host birds, like the vireo. Wild creatures do adapt to change but slowly over decades, centuries, or millennia, not ones thrust upon them virtually overnight like the cowbird invasion.

And, change driven by human dominance and transformation of the landscape can result in ecosystem collapse and extinctions. This time, however, effective human intervention saved the vireo from annihilation.

The first nests I found in the Prado Basin were typical of most seen since; hung in a fork of mule fat or willow branches just above the bottom edge of the foliage belt, below which is a jungle of stems. Pursuing a singing male LBV through this jungle was like pretending with children that you know where their candy is hidden. Many male vireo will lead you straight to their nest and even sit on it.

Searching for nests while avoiding damage to the plants potentially supporting a nest, one must ninja, shimmy and limbo through, but mostly under, the tangle. Inching along on my back, I remember glancing sidelong at the ground, which, just off my nose, was moving with ants, earwigs, sowbugs, centipedes and the like. I resisted resting my head among them. Today, biologists use a little mirror on a stick to check nest contents from more of a distance. This minimizes trailing and leaving scent right up to a nest when checking on them.

Vireo numbers are reported in two ways, male territories and known pairs. Determining territories means simply counting singing males; they are quite territorial and generally come back to the same patch of habitat each year. This takes much less time than checking to see if a male is paired. Females are quite secretive and the nests are well hidden, so it can take hours or days to observe either in a single territory.

Many males sing throughout the season but some grow quiet when paired and nesting. When there were only 12 territories in the Prado Basin, there was ample time for one field biologist to determine that all but one of those singing males was paired. In 2019, when there were 606 territories in the basin, determining not only who’s paired, but quantifying their reproductive output was a bit more of a challenge. With six field biologists today, we generally can collect reproductive data in about one-third of the territories that includes number of nesting attempts, number of eggs per attempt (often four), eggs predated, nests parasitized, how many eggs hatch, and how many chicks survive to fledging (flight and independence).

Where water flows, habitat grows and wildlife proliferates, including rare species. Early on, OCWD made the choice to be a great steward of the environment while excelling in water management. It was a unique choice for a water district in those days but has served OCWD and its customers well. Surface water, the habitat it grows, and the species that live there are heavily regulated, but the District’s commitment goes beyond simple compliance, allowing OCWD to operate efficiently in spite of what could be a heavy regulatory burden. So, we restore habitat annually, manage wildlife effectively and have watched nesting bird populations grow over time, many species, not just the vireo.

You read correctly above, last year there were 606 breeding territories of the once critically endangered least Bell’s vireo. But the best part of this news is that we extended our efforts to the entire watershed through a Watershed Program founded by OCWD in 1997 with the Nature Conservancy; today it’s with the Resource Conservation Districts and known as the Santa Ana Watershed Association (SAWA). SAWA biologists cover most of the watershed outside the Prado Basin and in 2019 documented 1,361 vireo territories, with Prado totaling nearly 2,000, in the watershed last year. So, the field folks tell me that we could be headed for a record number of vireos in 2020.

To me, OCWD stepped up when no one else would, kept up a class act, and has already achieved what was unimagined in 1983. You can’t walk into the Prado Basin during springtime without hearing vireos and many other birds calling everywhere. A few days ago, I heard a symphony of bird song, possibly a cacophony to some, but fine music to my ears!