The Orange County Water District (OCWD; the District) is in the native fish business, because water management puts us in their river habitat almost daily. But, this article is personal for me so I open with mention of early outdoor experiences that led me to a future in resource management with the District. I share these notes in the hope that some of you may be in a position to influence another similarly. Most hunters become connected to the natural world that nurtures their quarry as did I. Enjoy my story.

My Dad was a navigator in a B-29, shot down over enemy territory, and had to “camp” and trek for days, with remaining crew, to safety thanks only to sympathetic locals. Following that nightmare, he had absolutely no interest in camping or anything remotely related, so my outdoor life began late, in high school. 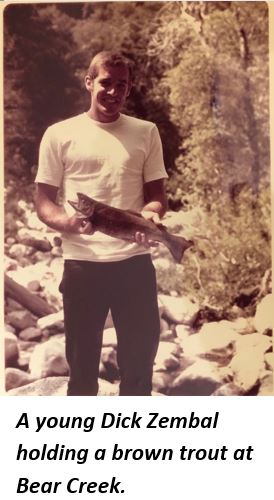 I was lucky enough to get a crash course from my older sister’s boyfriend. Thirty-six weekends in a row, we hunted, fished, panned for gold, climbed peaks, and lived partly off-the-land on extended trips into the Sierra Nevada Mountains. I wish such epic adventures on every young person alive today but, sadly, few get anything close and many grow up disassociated from such things.

Fishing with my elder, stolen buddy, sorry sis, was a contest, one in which the stronger and quicker of wit had the advantage. I was much stronger, he much smarter, so the competition was intensely balanced. We fished many Southern California streams and lakes including the most local, like Bear and Deep creeks.

A fishing trek on a creek like Bear was an exploration and all-day hike. Parked off the highway a few miles from Big Bear Lake, we would hike down the spine of a ridge to the creek, fishing upstream toward the dam until dark, vying for first cast at every new pool. The creekside was beautifully overgrown in late spring, flowers and butterflies abounded, as did rattlesnakes. We boulder-hopped when possible, but we still had numerous close encounters with the buzz-tailed rodent-nabbers.

Casting a fishing line through small openings in the bramble into the cascade at the top of a pool had to be done skillfully or you’d sit snagged, waiting begrudgingly until the pool was slowly worked by your buddy. The dam carried lake-fed rainbow trout into the creek. They were heavy-bodied, out of place in this trickling stream but seemingly anxious for our silver or gold Mepps lures. Each decent pool also held a resident brown trout or two. The fishing was spectacular, so much so that today it is under special regulations.

Piedra Blanca Creek, off the Sespe River Trail in Ventura’s Los Padres National Forest, is the fishing creek of my yesteryear that is most reminiscent of one that we manage today for OCWD. It was a small, intermittent stream except in high rainfall years. Getting there was a trek, first through scrub and then bigcone spruces.

Walking the dry, sandy creek bed can make one feel foolish carrying a fishing rod, but then the dry sand turns to wet. Further up is the first remnant pool, followed by another bigger, isolated pool. After a mile or two, there are pools interconnected with a small flowing stream and each is laden with fish. Recent studies have shown that many of those fish species are native steelhead trout. They weren’t bigger than 10 or 11 inches but there were dozens in every pool back then, each seemingly bent on demolishing any lure thrown their way. 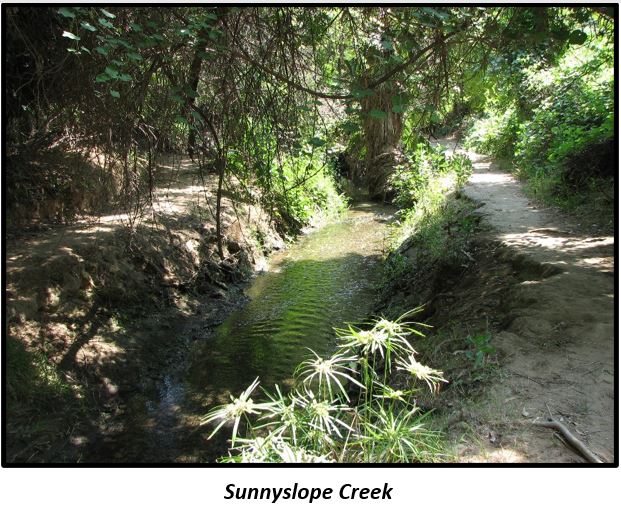 As I said at the onset, OCWD is in the native fish business and my early experiences did come in handy. An Agreement with the California Department of Fish and Wildlife mandates OCWD to create and manage spawning habitat for native fishes in the Santa Ana River Watershed and we have done so on Sunnyslope Creek in western Riverside County.

So far, we are the only entity to accomplish the restoration of spawning habitat for the threatened Santa Ana sucker in the wild. Suckers used to occur regularly in the river on OCWD property near River Road on the edge of the Prado Basin; now the river there is sandy and shallow, offering no suitable habitat.

Like the Piedra Blanca, Sunnyslope is a wisp of a stream, the flows within which are barely measurable except following a downpour. The creek is a tributary of the Santa Ana River located in the vicinity of the old Rubidoux Nature Center grounds. When the river moved to the east in 2005, the natural part of Sunnyslope Creek was left with very little incline and it clogged and closed off from the river. The native fishes, suckers and Arroyo chubs that used to spawn in the creek, no longer had access to its pools and gravel bars.

The District explored this as an opportunity to fulfill its obligation to manage habitat for native fishes. OCWD partnered with the Santa Ana Watershed Association (SAWA) and others to restore the river connection, managing the choke points, trash, and non-native aquatic competitors and predators in the creek.

In the throes of our initial investigation, we measured water depth and other creek dimensions—noting cover and substrate type. We body slammed through marsh tangles, disengaged debris/trash dams along the creek and broke it open to the river in 2010. By 2011/2012 with ample rainfall, the creek followed our path to the river and native fishes returned to spawn in the creek. 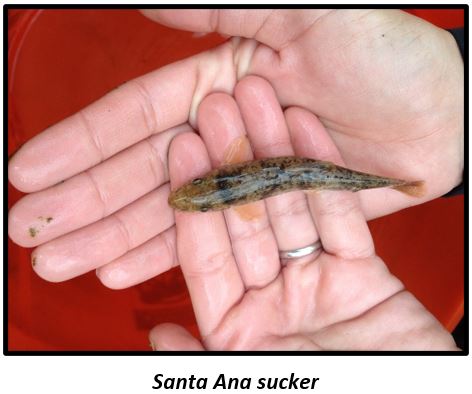 The Santa Ana sucker, a native freshwater fish endemic to Southern California, is still in big trouble. Once abundant and much more widespread, populations today are confined to short upper reaches of only three Los Angeles Basin river systems. Adults are dark grey and blotchy on the back with whitish silver on the underside; they vary in length but ours are usually 3 to 5 inches long.

They spawn usually from early April to early July with peaks in late May and June. Females release eggs over gravel and cobble; the sticky eggs attach to the hard surfaces, securing them in the current. The rocks also anchor algae, a staple in the diet of an adult sucker, and provide niches for debris and insect larvae, also consumed by this fish. Suitable habitat, clear running water with abundant gravel beds free of non-native predators, is now scarce in the suckers’ historical range, which used to include the Los Angeles, San Gabriel and Santa Ana rivers, from the Pacific Ocean to the foothills of the local mountains. 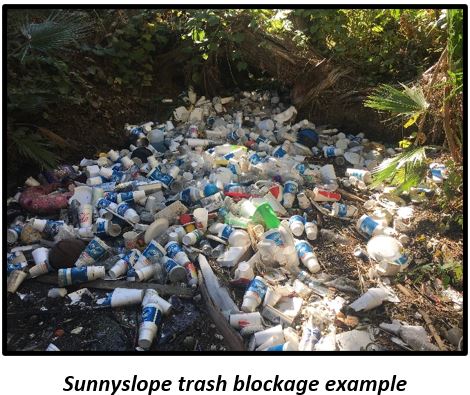 OCWD’s management of Sunnyslope Creek is ongoing. There are homes, schools, major roads, a large park, and a small airport in the watershed; the trash that they produce is an embarrassment. A single December 2019 clean-up alone yielded 34, 45-gallon trash bags of refuse including disturbing, hazardous sharps. There were hundreds of Slurpee cups. Larger items found last year were crowned by a mattress and box springs. About 560 staff-hours were expended by OCWD and SAWA on the creek in 2019, including 100 volunteer hours.

Most of that time was spent on blockage control, removing trash and debris, but ample time went into controlling invasive species as well. In 2011 through 2019, 27,745 individuals of 14 non-native species have been removed from the creek. Problematic predators and competitors include bass, catfish, fathead minnows, crayfish, and African clawed frogs.

We at OCWD are making a significant difference in the survival probability of this little native fish and many more similar efforts are now on the drawing board for the Santa Ana River.

When was the last time you went fishing? Ever take a child or young adult on their first camping trip? Sharing outdoor adventures with another can lead to profound connections and who knows, down the road, they just might be inspired to champion wild creatures, too.