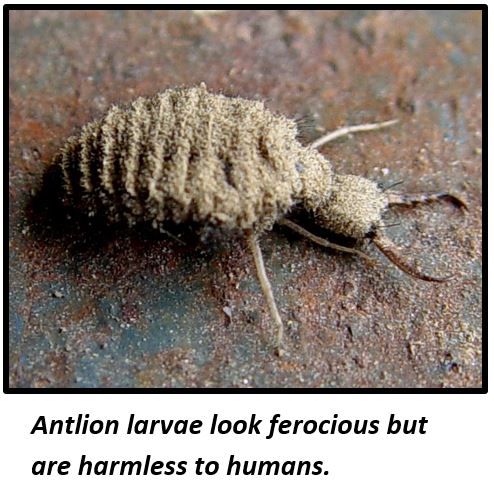 Most of us carry some degree of totally unfounded fear involving a fellow creature, part real, part mythological. There is logic in fearing, better yet in knowing and avoiding larger, toothier animals. Yet, the nightmares and dramatic reactions from my acquaintances are often conjured by the smaller creatures that scurry, slither, flutter, or make webs.

Antlion larvae, for example, look ferocious, but are harmless to humans. There are some 50 species of tiger moths in California; their caterpillars, called woolly bears are black and brown banded and covered in long hairs and, despite their fierce name, are also harmless.

I was taught to fear and dispatch spiders as a child but the beauty of a black and yellow garden spider, one of our more common orb weavers won me over, enticed my curiosity, investigation, and finally nonlethal contact. This led to attempts at handling garden spiders, something for which they do not hold still. 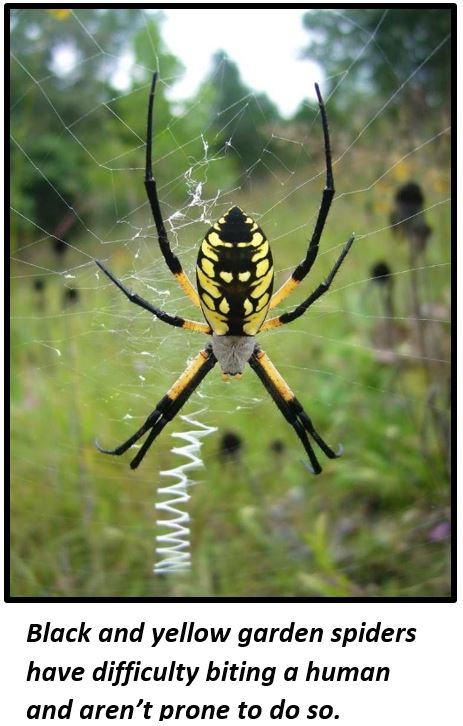 Their mouth parts are so small and weak that they have great difficulty biting a human and are not prone to do so, but they move so fast that getting them into one’s hand is no easy task. Their venom is weak on humans, apparently causing redness and swelling, milder than a bee sting but you couldn’t prove that by me. They have never wasted venom on me, although they could have on numerous occasions.

Walking face-first into an occupied web has happened a few times but was always accidental since I have no desire to cause them the trouble to rebuild their symmetrically laced bug trap. However, such happenstance resulted in one of the lengthiest contacts I ever had with one of these black and gold beauties, when she perched on my nose shortly, multiple little eyes staring straight into mine before scurrying over my forehead and hair into her home-shrub.

What we call daddy long-legs are actually long-bodied cellar spiders. They have some of the most powerful venom in the spider kingdom but have never managed to inject me while moving countless of them out of broom-danger; they are slow-moving and easily grabbed. On-trail, I have handled our largest Orange County spider many times and the tarantula has always been gentle, although sometimes a bit testy.

Black widows were common in my yard but have recently been displaced by an African import, brown widows, which are very shy and reclusive compared to the black; their cubbies are also much smaller and more open. When disturbed, the brown often rolls into a ball and freezes, disappearing against most substrates. Both widows have strong, haphazardly woven webs and red abdominal markings but the white silken egg sack of the brown sports spikes, reminiscent of a miniature submarine mine. The widows are the only Orange County spiders with venom that can do us significant harm and the only ones that should not be handled. Spiders are great controllers of bugs in and around the home, if left undisturbed to do their thing. 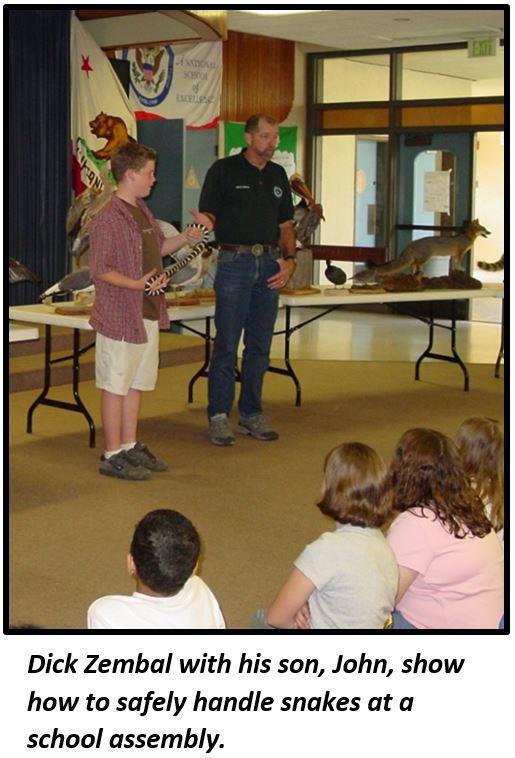 Familiarity can help temper animal fears. My son, John, when very young was afraid of snakes, so of course by age 10, we had a collection of a dozen snakes native to Southern California. A biologist by trade, I could collect three annually just with a fishing license, back in the day. Two of John’s snakes, the ring-necked and night snake were venomous (his mother still doesn’t know this) but rear-fanged and so no threat to people. His favorite by far was the rosy boa, gentle and slow-moving until offered food. The most rambunctious was a gopher snake, a big female that did not like being handled but if handled correctly would strike at others and not the handler. Her name was Goof.

I rarely am struck by a snake picked up for examination in the wild. The teeth are very tiny, raked backwards and serve only to hold small wiggling prey, unable to do significant damage to larger animals. The highly venomous snakes are the rattlesnakes and they warrant wide berth. The most common is the Southern Pacific rattlesnake and they are generally confined to the wilder parts of Orange County. Rattlesnakes are ambush hunters and mostly retiring. Where they do not see people very often, they often don’t bother to rattle, which can be a bit unnerving when one is nearly stepped upon. The snakes of Orange County are generally gentle insect, mouse, and reptile harvesters that help keep balance in wild populations.

Wild creatures are best approached with knowledge and understanding, not hearsay and fear of the unknown. It is important that we examine the basis for our fears with facts and analysis, to get rid of those that cause unwarranted angst. There is enough happening in our lives to generate legitimate worries without us perpetuating bugbears.