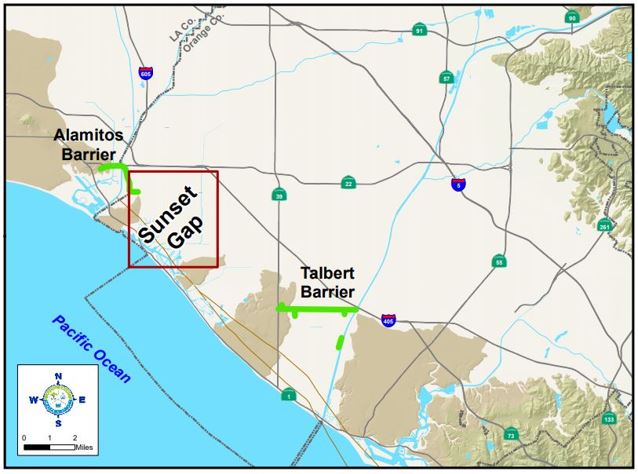 The Orange County Groundwater Basin is vast. It spans more than 300 square miles and it holds 21 trillion gallons of water, but only 1% can be removed without risking negative impacts such as land subsidence, or the compacting of earth, which causes lowering of the land surface.

The amount of available groundwater is challenged by recurring droughts; saltwater contamination from the Pacific Ocean, called seawater intrusion; and legacy contamination by businesses that manufactured and released chemicals to the groundwater as far back as the 1940s.

The Orange County Water District (OCWD; the District) manages 316 square miles of the Orange County Groundwater Basin, which provides about 77% of the drinking water supply for 2.5 million people in north and central Orange County. OCWD strives to protect the basin against contamination. My message this month addresses the oldest threat to groundwater quality —seawater intrusion, which can migrate inland underground, replacing freshwater.

Since the mid-1960s, the District has worked diligently to stall the influx of seawater by creating underground seawater barriers. It also created the Groundwater Replenishment System, and its predecessor Water Factory 21, to transform wastewater into a supply of high-quality freshwater needed to inject into the barriers.

Through seawater barriers, water is injected via wells that range in depth from 100 to 685 feet to create a freshwater pressure ridge underground that prevents seawater from moving inland and contaminating valuable groundwater.

OCWD has been using injection wells successfully at the District’s Talbert Barrier, which is located within the cities of Huntington Beach and Fountain Valley. It features 102 injection wells that span a distance of three miles.

Additionally, the District and Los Angeles County are jointly using 59 injection wells at the Alamitos Barrier in Seal Beach and Long Beach along the Los Angeles-Orange County line.

Since 2010, the District has been investigating the nature and extent of seawater intrusion in the Sunset Gap area beneath the Naval Weapons Station in Seal Beach (NWSSB). Sunset Gap is a vulnerable expanse where the basin is shallow and in contact with the coastline.

Seawater intrusion in the Sunset Gap became apparent in 2015 when a Huntington Beach production well, located over three miles from the ocean, was closed due to increased salinity that corroded the well beyond repair. OCWD’s investigation has found that seawater extends in proximity to active city production wells. The likely solution to this newest seawater contamination problem is to construct another seawater barrier.

To further understand the flow paths and extent of seawater intrusion in the Sunset Gap, OCWD is proposing to install 11 monitoring wells at five locations in the cities of Huntington Beach and Seal Beach. Information gathered is also important for the design of a future barrier. Monitoring well construction is estimated to start in early 2021 at The Boeing Co.’s Huntington Beach campus before proceeding to public locations. Construction is estimated to be completed in late 2021. Additional information about this project can be found in the Sunset Gap Seawater Intrusion Investigation factsheet.

With more than 50 years of seawater barrier experience, OCWD will continue its efforts to push threatening saltwater back toward the ocean to ensure abundant, high-quality drinking water for future generations.