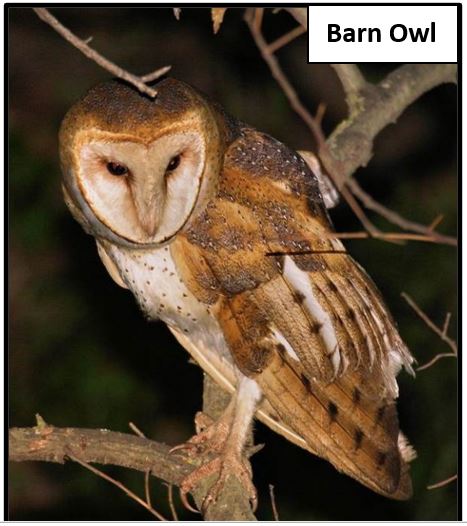 Students were lying, face-up in the grass, quite unhappy with me; no phones, no talking. The sun had set much earlier and the turf was getting wetter and colder. Then finally, a creature appeared above us, silhouetted in the moonlight, against the stars. A flash of white underwing, a series of screech notes, clicking further removed and then the barn owl whose appearance we had anticipated was off again in further quest of its nightly fare.

Our brief encounter required a bit of patience but little luck since the barn owl is our most common nocturnal bird of prey in Orange County, it was nesting season, and our stakeout adjoined decent habitat. Barn owls are cavity-nesters; they nest in tree cavities, holes in cliff faces, even steep recesses in buildings that are dark and covered, as in the heights of a tall barn or attic with regular access.

They are mouse hunters, supreme; there is no better rodent control. In the depths of the Prado Basin* forest where we saw problems with mice invading nests of the endangered least Bell’s vireo bird, we deployed barn owl nesting boxes. Most of the boxes were occupied quickly and weeks later, the problems with nest thievery were gone.

My sullen soggy students were also required to inspect owl food remains cast in and below the nest boxes. Barn owls have very primitive digestive systems, incapable of processing large bones, fur or feathers which are eliminated back through the mouth as a solid pelletized material about the size of a large Medjool date. Amongst those remains were the skulls of small mammals, mostly rodents whose brain cases are identifiable to species. Dozens of species were represented in the pellets, but the most common were gophers and meadow mice. Although during the recent drought, the abundance was much greater of small birds and crayfish. 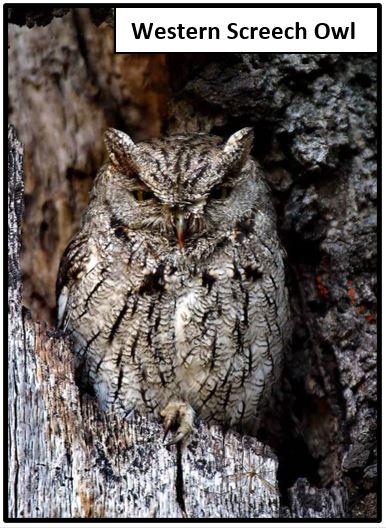 Barn owls fly on silent wings. The only sounds they utter are low clicks, hisses and screeches— contact notes that can activate a miniature commotion below in the understory world. The owl has a facial disc; all of the short feathers orient outward, comprising one component of an acute auditory system that draws in the faintest of noises, even a mouse scurrying in dry leaves. The ears are offset on the edge of the disc, allowing echolocation. Their nighttime vision is remarkable and, in tandem with auditory powers that give them direction and distance, they are the most formidable of mousers even in pitch black darkness.

Another masterful hunter, the western screech owl, also nests in Prado Basin boxes but those with smaller openings, deployed for wood ducks. Where the barn owl weighs a pound with wings spanning 3 ½ ft, the screech owl weighs only 5 ounces with a wingspan closer to 1 ½ ft. I once walked up on a screech owl perched on a limb at head-height, frozen against the matching tree bark; that bird virtually disappeared in front of me when it slowly closed its bright yellow eyes. 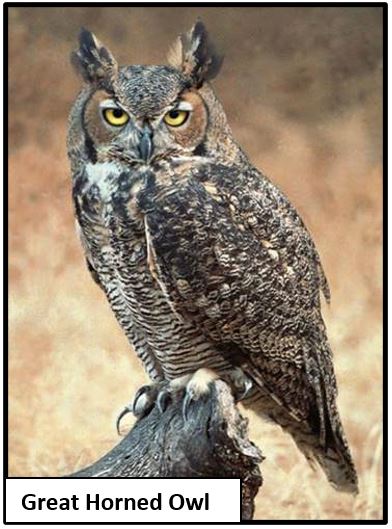 The most formidable of the Orange County owls is the great horned owl. Weighing in at over 3 pounds, it readily takes rabbits and sometimes birds larger than itself. The iconic call of the great horned owl sounds like “WHO,” repeated. You are lucky to hear one hoot and have it hunting nearby.

Many old superstitions developed around owls: they were thought to be magic; could live with ghosts and so occupy abandoned, haunted dwellings; they are wise; etc. These birds are active at night and not easily observed or understood by ancient peoples whose stories and superstitions were a way of coping with the unknown. Owls gave them plenty of fodder: They can rotate their heads beyond 180 degrees; because their eyes are fixed in the sockets, they bob and dip to get the same visual perspective we can with mobile eyeballs; when they fly off, there is no noise and they seemingly disappear without a sound.

I regularly have owls over my yard in Laguna Hills; your digs probably do, too. When was the last time you star-gazed and listened to the night sounds?

*OCWD owns approximately 2,400 acres of land in the Prado Basin of Riverside County, which includes 465 acres of constructed wetlands. The Prado Wetlands, which are the largest constructed wetlands on the west coast of the United States, are designed to remove nitrogen and other chemicals from the Santa Ana River before the water flows downstream into Orange County where it is diverted into OCWD’s surface water recharge system and infiltrates into the Orange County Groundwater Basin’s aquifers. OCWD manages that basin, which provides 77% of the drinking water for north and central Orange County.