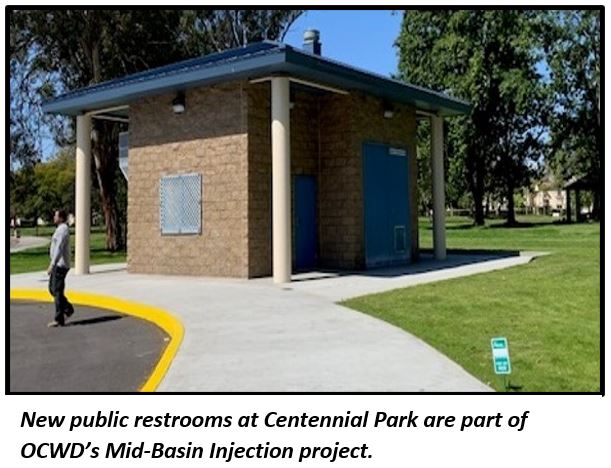 The 2.5-year $29.5 million MBI project is located in the city of Santa Ana, primarily at Centennial Park. It is a solution that addresses a local groundwater depression in the central part of the Orange County Groundwater Basin (Basin), which currently provides about 77% of the water supply to more than 2.5 million residents.

The MBI project will inject up to 10 million gallons of GWRS water a day (MGD), enough water for 85,000 people. Filling this depression will reduce pumping costs paid by water agencies served by OCWD as groundwater levels in local wells will be higher. Additional project benefits include decreasing the threat of seawater contamination, reducing the potential for upwelling of amber-tinted water from deeper aquifers, and freeing up recharge capacity in the Anaheim forebay to recharge other sources of water, such as Santa Ana River and imported water, when available.

“As the OCWD board member appointed to represent the constituents of Santa Ana, I am honored to share the news that this project has been completed and that it has already received distinguished awards,” said OCWD Board President Vicente Sarmiento.

The MBI project was recognized in 2019 with the Water Treatment Project of the Year Award from the American Society of Civil Engineers—Orange County Branch (ASCE OC) and the Orange County Engineering Council (OCWC) Project Achievement Award.

“The District will continue to invest in and implement fiscally sound water reliability projects to ensure an adequate water supply for the millions of people in our service area,” added President Sarmiento.

Implemented in 2008, the GWRS produces 100 MGD of advanced purified drinking water and is the primary and most reliable source used to refill the Basin. A 30 MGD final expansion of the GWRS will come online in 2023 and the MBI project supports this expansion because it helps recharge more water into the ground.

The MBI project includes the construction of four injection wells, two monitoring wells, approximately 5,700 linear feet of supply pipeline, and approximately 4,200 linear feet of backflush pipeline. Construction phasing and communication were critical to the success of this project because its footprint impacted many stakeholders. The District began meeting with stakeholders long before the project broke ground, met regularly, and maintained ongoing communication to minimize impacts to the community and address questions and concerns. Public outreach is a key part of all District projects.

The MBI project scope was able to include improvements that were made to Centennial Regional Park and the Heritage Museum of Orange County for the public to enjoy. Two new structures in Centennial Park house a room for OCWD’s equipment, new public restrooms, a city office and two city dressing rooms to be used for soccer facilities. Additionally, 9.6 acres of asphalt were repaved in the park, improvements made to the skate park, leveling of paver stone roadways, removal of dangerous trees and replacement with preferred species, and new signage for the high school. The project will also aid in keeping the park’s lake full by replacing the drinking water supply currently used to replace water lost to evaporation with well backwash water. At the Heritage Museum, improvements included a new greenhouse, decomposed granite roadways, raised planters, new fruit trees, educational signage, removal of dangerous trees, and a water conservation measure whereby OCWD discharges well sampling water from the two monitoring wells to the museum’s vegetation.