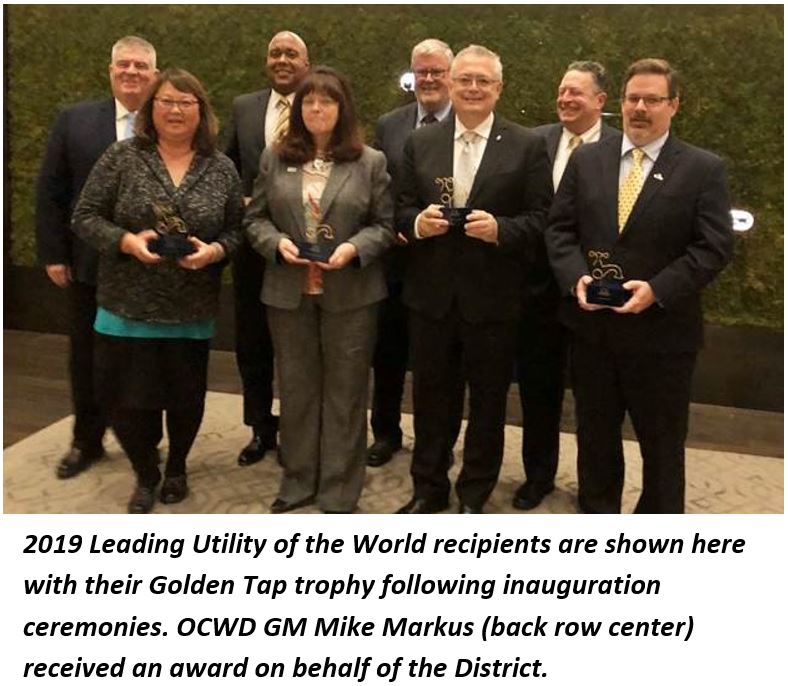 The Orange County Water District (OCWD; the District) has received the status of Leading Utility of the World (LUOW), according to the Global Water Leaders Group, a non-profit organization aiming to create a better story for water worldwide. The inauguration took place at the American Water Summit on Nov. 13 in Houston, Texas. OCWD also received the iconic Golden Tap trophy to commemorate its membership in LUOW.

“We thank the Global Water Leaders Group for accepting us into its prestigious membership as one of the Leading Utilities of the World,” said OCWD President Vicente Sarmiento. “The Orange County Water District is dedicated to sharing ideas and inspiring others to their best performance in building sustainable and smart projects that deliver reliable and high-quality water. We look forward to collaborating with this distinguished group as we all work to advance the water industry in the 21st century.”

OCWD was one of six utilities who presented their outstanding innovations during the Summit. This included three innovation areas the District considered to be remarkable on a global scale: wastewater treatment and environmental impact, stakeholder engagement, and water resources management. OCWD General Manager Mike Markus provided the District’s presentation.

Once the presentations were completed at the event, roundtables followed in order to continue the discussions with utility CEOs from all around the world.

According to Global Water Leaders Group, Leading Utilities of the World is a network of the world’s most forward-thinking water and wastewater utilities, as defined by the network’s 14 distinct innovation areas. Its members represent the gold standard of utility innovation and performance throughout the developed world’s water sector.