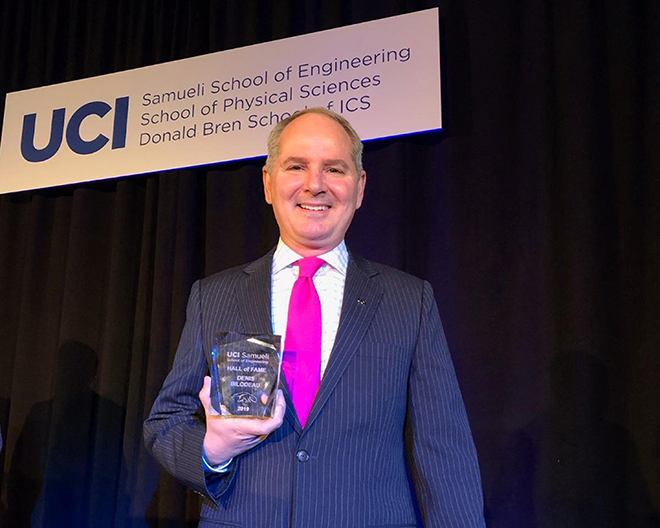 Orange County Water District (OCWD; the District) Board of Director Denis Bilodeau, P.E., was inducted into the University of California Irvine (UCI) Samueli School of Engineering Hall of Fame on Feb. 8, 2019. The Hall of Fame honors those who have made a significant impact in their profession, or in other ways have brought distinction to their alma mater.

Director Bilodeau graduated in 1991 from UCI, earning a Bachelor of Science degree in civil engineering, and he is a registered civil and traffic engineer. He is one of 12 Samueli School of Engineering Hall of Fame inductees this year and one of four in the engineering category. Director Bilodeau was nominated for his impact on the field of engineering for leading the effort to bring the world’s largest water reclamation facility, the Groundwater Replenishment System (GWRS), online.

“I am honored to receive this recognition alongside my esteemed engineering colleagues,” said Director Bilodeau. “I have served on the Orange County Water District Board of Directors for 18 years and it has been one of my greatest achievements. It has provided me the opportunity to co-lead the effort to design, build and finance an engineering marvel that has brought water reliability to Orange County and is hailed as the global model for water sustainability,” he added.

The GWRS has received more than 50 awards and has been featured by prominent national and international media. It takes treated wastewater from the Orange County Sanitation District and purifies it to drinking water standards to help increase the local water supply relied up on by more than 2.5 million people in north and central Orange County. The GWRS has produced more than 271 billion gallons of pure water since it began operating in 2008. Director Bilodeau aided in bringing the initial 70 million-gallon-a-day (MGD) project online, implementing a 30 MGD project expansion and initiating a final project expansion that will be completed in 2023 and bring total water production to 130 MGD, enough water for one million people.

Director Bilodeau was elected to the OCWD Board of Directors in 2000 and is presently the longest standing board member. He is committed to continuing his work at OCWD to create a reliable water future for Orange County and looks forward to implementing projects and programs that support this effort.

The Hall of Fame Celebration took place at the Tustin Hangars and kicked off UCI’s Homecoming and Reunion Weekend. The Samueli School of Engineering and the Donald Bren School of Information and Computer Sciences established the Hall of Fame in 2015 as UCI was celebrating its 50th anniversary as one of the nation’s leading universities. The School of Physical Sciences joined the celebration in 2018. For more information on the Hall of Fame, visit http://engineering.uci.edu/alumni-friends/hall-of-fame.