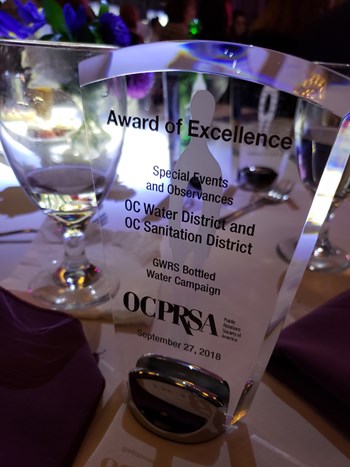 OCWD and OCSD submitted their project in the “Special Events and Observances” category in which they proved that they successfully incorporated research, planning, execution, and evaluation into a challenging public relations campaign. The two agencies teamed with Dick Jones Communications to draft a communications plan and to help carry out many of the extensive aspects of the project.

“This OCPRSA recognition honors the continued hard work and creative outreach staff performs for the betterment of its community and those beyond to receive quality, reliable water from new sources,” said OCWD President Denis Bilodeau. “Our vision is to see Orange County and all of California have ample water.”

The two agencies, with WateReuse, helped to pass Assembly Bill 2022, which now allows the bottling of advanced purified water for educational purposes. OCWD and OCSD, partners in the Groundwater Replenishment System (GWRS)—the largest advanced purification project of its kind in the world—were the first in the Western Hemisphere to bottle recycled water.

The project, for which they received the OCPRSA Award of Excellence, included a year-long California tour to bring bottled water and information to about 17,000 people from San Diego to Sacramento to educate audiences about the reliability and quality of this new source of water. It also included four primary campaign events: the GWRS bottled recycled water launch, the #GetOverIt! challenge for media and social media influencers to taste GWRS water and report about it, the GWRS 10th anniversary Winter Fest community party, and the Guinness World Records™ attempt to recycle the most wastewater to drinking water in 24 hours, for which the agencies garnered the Guinness title.

“The ‘GWRS Bottled Water Campaign’ reached beyond the borders of Orange County to help similar advanced purification projects in California succeed by educating people to get over the ‘yuck’ factor that has doomed many projects in the past,” says OCSD Board Chairman Greg Sebourn. “The bottled water tour allowed people who might not otherwise be able, to taste it for themselves and get over it. The events garnered additional acknowledgment and acceptance that there are viable sources of recycled water to be tapped.”

OCWD and OCSD are dedicated to the creation, promotion and management of recycled water education programs throughout Orange County, California.

The Orange County Chapter of the Public Relations Society of America is the nation’s largest national association of public relations professionals.