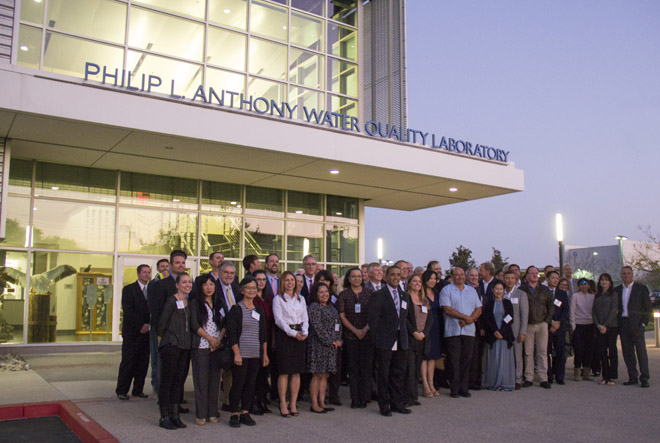 Prior to its board of directors’ meeting on Nov. 7, Orange County Water District (OCWD, the District) directors and staff gathered for a ceremony with local, state and federal representatives to rename OCWD’s lab in honor of its former director, Philip L. Anthony. Joined by Director Anthony’s family and United States Congressman Jose Luis Correa (CD 46), the ceremony concluded with the unveiling of a plaque and new lab sign to officially dedicate the Philip L. Anthony Water Quality Laboratory. Director Anthony passed away on July 26, 2018.

“The entire water industry, especially OCWD, has been mourning the loss of this visionary leader and we wanted a way to acknowledge Phil’s nearly 37 years of service on the board,” said OCWD President Denis Bilodeau. “The lab is critical to OCWD’s mission and its sophisticated analysis and testing ensures that water is safe for the more than 2.5 million people we serve. We are forever grateful to Phil for his service and leadership. After serving nearly four decades on the OCWD board, he played an important role in pioneering projects that have now become the industry standard.”

“Phil Anthony was a strong and knowledgeable leader who will be greatly missed,” said Congressman Correa. “I am honored to join his colleagues in memorializing his contribution to Orange County and to the Orange County Water District. Phil was a scientist through and through. I can think of no better tribute to his legacy than to name a world-class laboratory after him. He will be missed.” 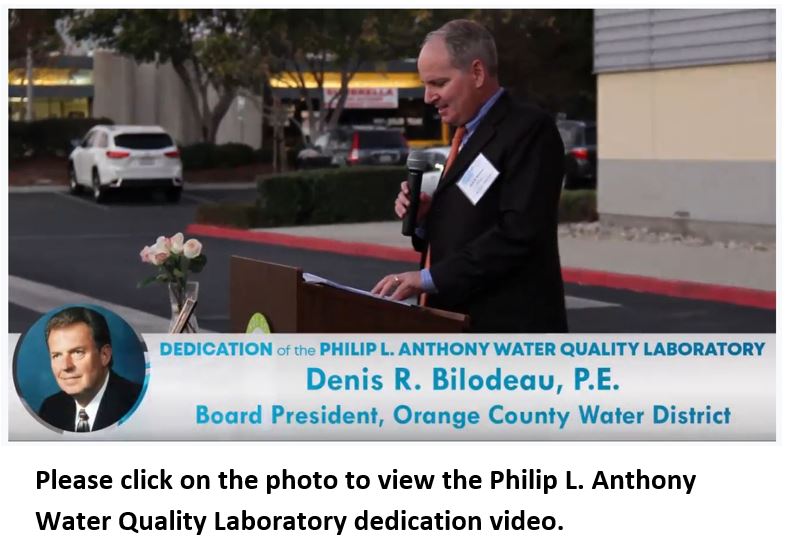 Director Anthony held a Bachelor of Science degree in chemistry, a Master of Science degree in physical chemistry and was a champion of building the new laboratory, which was dedicated in October 2009. The state-of-the-art facility replaced a 35-year-old building and several add-on portable trailers that OCWD had outgrown. The lab is an internationally recognized leader in water quality testing and performs more than 400,000 analyses of approximately 20,000 water samples each year. It is one of three public agency labs in the nation to provide a full Unregulated Contaminants Monitoring Rule (UCMR) 3 program, which is certified by the United States Environmental Protection Agency (EPA) for seven EPA methods, which include 28 trace contaminants and chemicals of emerging concern (CECs).

Director Anthony is OCWD’s longest-serving board member. He was first elected to the OCWD Board of Directors in 1981 to represent division four which includes the cities of Los Alamitos and Seal Beach and parts of Buena Park, Cypress, Garden Grove, Huntington Beach, Stanton, and Westminster. Director Anthony served as president of OCWD from 1993 through 1995 and again from 2005 through 2007. In addition to leading efforts to build OCWD’s lab, Director Anthony was a strong proponent behind the construction of the Groundwater Replenishment System (GWRS), the world’s largest advanced water purification project of its kind. He had the vision to see wastewater as a resource and was confident that OCWD and the Orange County Sanitation District, OCWD’s partner in the project, could safely transform this resource into a reliable water supply for the region. The GWRS came online in 2008 and was expanded in 2015 to produce 100 million gallons of water per day.

Director Anthony also served as a director of the National Water Research Institute (NWRI) (1991 to 2018), commissioner of the Santa Ana Watershed Project Authority (2003 to 2018) and was formerly chair of the Association of California Water Agencies Region 10. Director Anthony also co-founded the Water Advisory Committee of Orange County in 1983, was a founding member of OCWD’s Groundwater Guardian Team in 1997 and served on the Santa Ana River Flood Protection Agency since 1988. Director Anthony received numerous honors for his leadership in the water industry, including the 2002 E. Benjamin Nelson Government Service Award from the Groundwater Foundation.

Director Anthony’s legacy lies in the profound impact he had through nearly half a century of public service. He started as a councilmember for the city of Westminster and later went on to serve on the Orange County Board of Supervisors and the Orange County Water District Board of Directors. “OCWD directors and staff are privileged to have worked with such a consummate professional and community servant,” added Bilodeau. “His legacy is layered through the many District projects and programs that are in place today and truly would not have been possible without his leadership.”