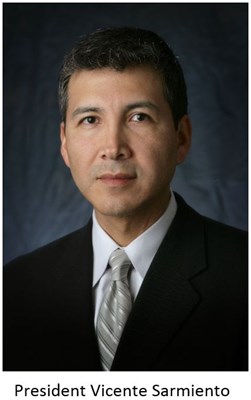 At yesterday’s board of directors meeting, the Orange County Water District (OCWD; the District) 10-member board elected Vicente Sarmiento to serve as the 2019 board president, and Cathy Green and Stephen R. Sheldon to serve as first and second vice president, respectively. The board will lead the District in fulfilling its mission to protect and manage the Orange County Groundwater Basin, which provides water to 2.5 million people in north and central Orange County.

President Sarmiento represents division 8, which includes the city of Santa Ana. He previously served on the OCWD board from January 2013 to February 2015 and was reappointed in December 2016. Currently serving his third term on the Santa Ana City Council, he was first appointed to the council in January 2007 and served as mayor pro tempore from 2014 to 2016. President Sarmiento graduated from the University of Berkeley with a Bachelor of Arts degree in Economics and received his Juris Doctor from the University of California, Los Angeles School of Law. He and his family have lived in and around Santa Ana since 1965 and he currently resides in the city with his wife and three children.

“I am honored to serve as president of the board,” said Sarmiento. “Water is our most critical resource and I’m proud to be part of an organization that has helped manage Orange County’s water since 1933. The board will work to implement programs that continue to make our local water supply reliable and continue OCWD’s innovative legacy in groundwater management and water recycling.”

First Vice President Cathy Green has been a member of the board of directors since 2010 and previously served as president in 2015 and 2016 and as first vice president in 2013 and 2014. She represents division 6, which includes parts of Fountain Valley and Huntington Beach. Prior to serving on the board, Green served two term terms on the Huntington Beach City Council as mayor. Second Vice President Stephen R. Sheldon has served on the board since 2005 and was president in 2008 and 2009. He represents division 5, which includes parts of Irvine and Newport Beach. Sheldon bring more than 25 years of experience in public policy and real estate development.

The OCWD Board of Directors is comprised of 10 directors. Seven directors are elected from divisions composed of cities located throughout north and central Orange County and three members are appointed to represent the cities of Anaheim, Fullerton and Santa Ana. Jordan Brandman, Anaheim city council member, was recently reappointed to the OCWD board to represent the city of Anaheim and was officially sworn into office at the December 19 board of directors meeting. Director Brandman was first appointed to the board in 2015 and served as a council member in Anaheim from 2012 to 2016. Previously, Director Brandman also served as a trustee of the Anaheim Union High School District (AUHSD), one of the largest school districts in the state of California, and as chairman of the Anaheim Public Utilities Board (APU).