President’s Message—Meeting the Challenges Ahead 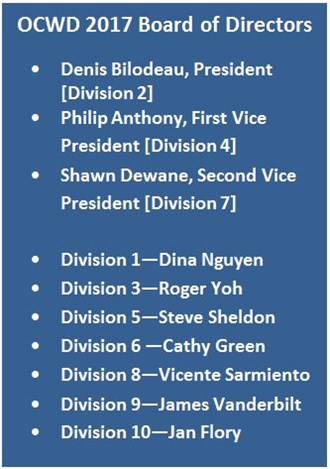 For nearly 17 years, it has been my pleasure to be a member of the Orange County Water District Board of Directors. This is my second appointment as president, having previously served from 2002 to 2004. I appreciate the Board’s vote of confidence to serve as its president again for the coming year.

I would like to take this opportunity to welcome back my colleagues who were recently reelected to serve on the board: Directors Philip Anthony, Shawn Dewane, Cathy Green, and Roger Yoh; and Director Vicente Sarmiento, newly appointed to the board to represent the city of Santa Ana. Director Sarmiento previously served on the OCWD board from January 2014 to February 2015.

In addition, I would like to welcome new board member James Vanderbilt who was recently appointed by the city of Anaheim.

We continue to lead the crusade to bring north and central Orange County water reliability and quality water while keeping costs down for our 19 member agencies. With the help of the Groundwater Replenishment System initial expansion, we have reached our goal of allowing these agencies to pump 75 percent of their water from the Orange County Groundwater Basin that the District manages—even during more than five years of drought. Since imported water is twice the cost of groundwater, that is a big savings.

Voting for the District to move forward with building the Groundwater Replenishment System has been one of my proudest moments, and now, to be president again as we plan the final expansion of this innovative project gives me great satisfaction. In addition, seeing how our board continues to make meaningful decisions that have groundbreaking impacts for the region and other communities around the globe is extremely rewarding.

The board might give direction, but it is the professional, diligent staff at the Orange County Water District that puts them into effect so seamlessly and remarkably. They are the reason for our world-wide prestige and credibility in groundwater management and water recycling innovation.

I have noticed a marked difference over my years with the District. OCWD has become increasingly important as a voice to influence legislation that will ripple the benefits to water agencies in the state and across the nation.

In April, I was deeply honored to appear before the Committee on Environment and Public Works in Washington, D.C., to give testimony at a hearing into the implications associated with an uncertain water supply future and how, as a nation, we must respond to this challenge. In addressing the need for a safe and reliable water supply, I spoke about our collaboration with the Orange County Sanitation District and how together we took the big problem of cyclical droughts that plague California and designed a solution that delivers long-term water security for our region that can be replicated throughout the nation and the world. We will continue to engage in legislative discussion to ensure our region’s interests are protected.

I am honored to be given the opportunity to lead OCWD in tackling exciting challenges and reaching positive resolutions in 2017.