This year, the GWRS celebrates its ninth anniversary. Since coming online, the project has produced more than 208 billion gallons of ultra-pure water. Today, the Groundwater Replenishment System (GWRS) provides enough water to cater to the needs of 850,000 people and is the largest facility of its kind in the world.

A great measure of the project’s success is proactive agency partnerships. The Orange County Water District and Orange County Sanitation District collaborated for more than seven years on the GWRS and the project has been a huge achievement, saving a vital resource; protecting the groundwater basin from saltwater contamination; reducing the amount of wastewater discharged to the ocean; postponing, perhaps indefinitely, the need to construct or expand OCSD’s outfall; and replenishing the groundwater basin.

Together, the two agencies obtained $92 million in state and federal grants as well as a $3.8 million per year for 21 years operating subsidy from the Metropolitan Water District of Southern California, resulting in a new water supply at a cost less than imported water. Jointly, they have invested more than $600 million in the original project and its initial expansion.

Public understanding of the purity of GWRS product water is seen as a key requirement for more widespread acceptance of potable reuse, which can be a critical new source of water that helps California better weather cyclical droughts and other water supply challenges. The passing of AB 2022 (Gordon, D-Menlo Park) will allow GWRS water to be bottled to support educational outreach efforts and both OCWD and OCSD staff are gearing up to get the word out. 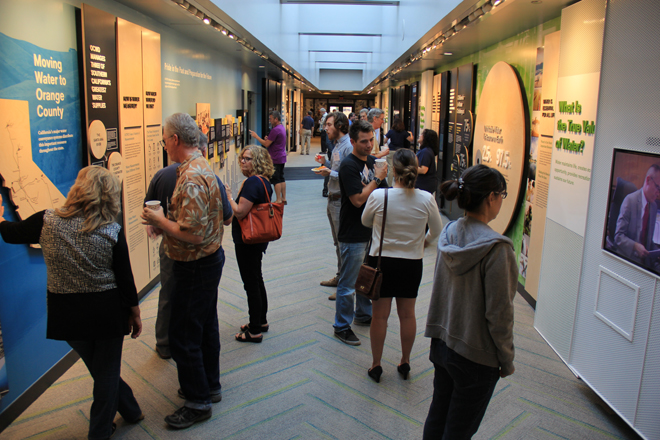 More than 4,150 guests toured the GWRS this past year alone. Furthering its efforts to provide new and enhanced avenues of learning about potable reuse, OCWD’s GWRS tour program has undergone significant changes. The presentation has been enhanced with video to fully illustrate concepts. Guests then file through the new H2O Learning Center educational corridor where points made in the boardroom are visualized in a museum-like interactive atmosphere. New hearing devices aid in fuller understanding and in retaining attention during the GWRS site portion of the tour.

The worldwide impact the GWRS has had in making potable reuse a reality from a technical, policy and social standpoint is and continues to be groundbreaking.

“The … Groundwater Replenishment System…represents an excellent example of the local leadership, innovation, sound planning and investment that have given north and central Orange County an advantage during our current drought crisis.” – California Governor Jerry Brown