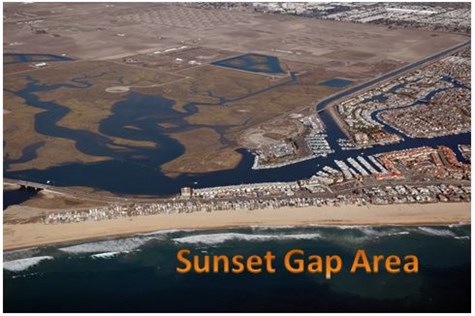 The Orange County Water District (OCWD; the District) is partnering with the United States Navy to combat seawater intrusion in the Orange County Groundwater Basin. Saltwater from the Pacific Ocean is the biggest threat to the basin and it is progressively migrating inland displacing freshwater in the regional aquifer. Left unchecked, the intrusion will continue to reduce the capacity of the basin which provides about 75 percent of the regional potable water supply.

Since 2010 the District has been investigating the nature and extent of seawater intrusion in the Sunset Gap area beneath the Naval Weapons Station Seal Beach. Investigations to date include an initial geophysical survey, construction and sampling of seven multi-depth monitoring wells, and preparation of nine geologic cross-sections. Throughout OCWD’s investigations, the Navy has supported the installation of new wells at the Naval Weapons Station to provide necessary monitoring data and improve the effectiveness of future projects to protect the basin.

Monitoring to date in the Sunset Gap has confirmed that seawater intrusion extends approximately three miles into the groundwater basin to the location of a former Huntington Beach well which was shut down and destroyed due to brackish groundwater. Aquifers containing brackish to saline groundwater extend to a depth of approximately 300 feet below ground surface. Groundwater in the affected aquifers beneath the weapons station generally flows easterly to northeasterly toward pumping depressions in the city of Huntington Beach. Complicating the picture is that the intrusion appears to enter the groundwater basin at up to three locations: 1) Alamitos Gap (south of the Alamitos Barrier injection wells), 2) leakage across the Newport-Inglewood Fault near Landing Hill, and 3) from the south from the vicinity of Huntington Harbour or Bolsa Chica Mesa.

Through seawater intrusion barriers, water is injected via wells that range in depth from 100 to 685 feet to create a high-pressure ridge underground that prevents seawater from moving inland and contaminating valuable groundwater.

The District’s Talbert Barrier, which is located within the cities of Huntington Beach and Fountain Valley, is OCWD’s alignment of 102 injection wells that spans a distance of 2.5 miles.

The more recent collaboration between the Navy and OCWD, the Aquifer Sustainability Project, is located in a five square-mile area between the two existing barriers in Sunset Gap, which is a vulnerable expanse where the basin is shallow and in contact with the coastline.

OCWD is charged with the responsibility of sustainably managing the Orange County Groundwater Basin which provides potable water to over 2.5 million residents. The Navy plays a vital role to enable this effort in support of regional sustainability. As noted by OCWD Chief Hydrogeologist, Roy Herndon, “The Navy’s assistance and our continued inter-agency cooperation continue to be essential and are much appreciated.”