President’s Message—The Drought is Officially Over 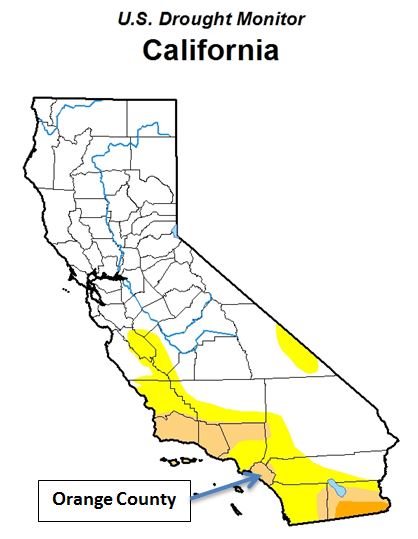 California’s most recent drought earned Orange County and a good portion of the state “exceptional” drought status. These areas witnessed widespread crop and pasture loss, widespread water shortages and restrictions, and shortages of water in reservoirs, streams and wells that created water emergencies.

On April 7, 2017, Governor Edmund G. Brown Jr. ended the drought state of emergency in most of California, including Orange County, following a robust winter rain and snow. We know that droughts are cyclical in California, so it’s no wonder that the Governor added, “This drought emergency is over, but the next drought could be around the corner. Conservation must remain a way of life.”

The drought spanned water years (Oct. 1 through Sept. 30) of 2012 through 2016. Of those, 2012 through 2015 were the driest four-years on record statewide. The smallest snowpack in the Sierra Nevada and Cascade Range of mountains was recorded in 2015 at 5 percent of average. And 2014, 2015 and 2016 were, in that order, the state’s first, second and third warmest years in terms of statewide average temperatures.

There were rumblings and some anticipation of a feared “mega drought” lasting more than 10 years.

Here in Orange County, we are still in a moderate drought, according to the U.S. Drought Monitor. We have received a little more than 19 inches of recorded rainfall this water year, about 5 inches beyond our yearly norm. Our groundwater level is now approximately 40 percent, up from 18 percent in December. Groundwater levels are still critical in much of the state as storm runoff is slower to make its way underground. We predict another three years or so of similar increased rainfalls are needed to fill the Orange County Groundwater Basin.

I feel this past drought had a “silver lining.” Emergency actions and investments prompted the California Water Action Plan, which is a five-year strategy that prepares our state water systems for more resiliency and reliability in light of population growth and climate change. Voters passed a water bond—bipartisan legislation that invests in safe drinking water and provides for recycling, water-use efficiency, groundwater management and cleanup, and $2.7 billion for additional water storage. And, for the first time in California history, the state enacted the Sustainable Groundwater Management Act.

In addition, the state offered funding for tens of thousands of water-efficient toilets to replace inefficient models, and replaced water-guzzling lawns with water-wise landscaping.

These actions, and the hefty 25 percent water conservation target that kept us all on a strict landscape watering schedule, made indelible imprints on California psyches to save water.

On the heels of the governor’s declaration, the Department of Water Resources, the State Water Resources Control Board, the Public Utilities Commission, Department of Food and Agriculture and the Energy Commission have collaboratively developed a framework to move the state from temporary emergency conservation measures into a long-term approach to ensure conservation becomes a California way of life.

The Governor’s Water Action Plan calls for water providers to meet new water use targets and to continue bans on wasteful practices such as hosing sidewalks, among many other elements. Some components will require new legislation and expanded state authority. The plan’s objectives are “use water more wisely, eliminate water waste, strengthen local drought resilience, and improve agricultural water use efficiency and drought planning.”

In addition to conservation, the Orange County Water District is a big proponent of stormwater capture and water reuse projects that will provide reliable drinking water when Californians need it most. These types of projects throughout the state have been aided by Proposition 1 (water bond) monies previously mentioned.

OCWD has been working with the U.S. Army Corps of Engineers to store additional stormwater behind Prado Dam in Riverside County. The temporary modifications to the dam’s operations by the Corps, referred to as deviations, allowed capture of more than 15,000 additional acre-feet of stormwater this past water year. That’s enough water for about 120,000 people for a year. This water is diverted efficiently into OCWD’s recharge basins in Orange County during drier months.

And, without the 100 million gallons per day produced by the expanded Groundwater Replenishment System (GWRS)—the world’s largest advanced water purification project for potable reuse, there might have been restrictions enacted to keep the Orange County Groundwater Basin from severe threats of seawater intrusion and land subsidence.

The GWRS and its significance were recently featured in the April 10 Time magazine special report on infrastructure in America. “What It Will Take to Rebuild America.”

The state’s ongoing conservation plans are important and we commend all involved in the efforts and foresight to keep California water-healthy and productive now and during extreme droughts. We also thank the legislators and people of this great state for acknowledging the need to go beyond conservation and vote to create sustainable, resilient projects that will establish reliable sources of water to meet our future needs.