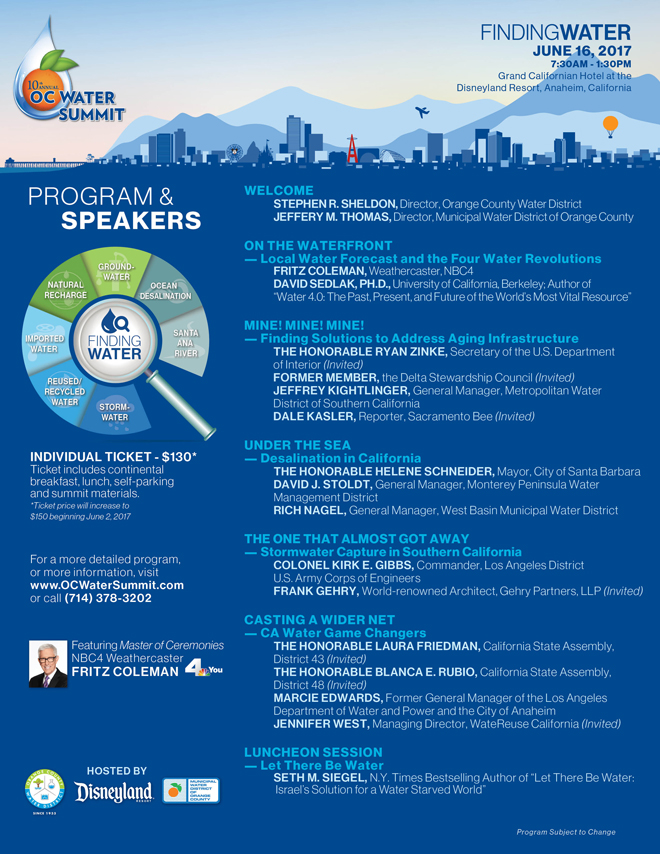 New York Times best-selling author of “Let There Be Water” Seth Siegel has been added to the celebrated roster of presenters at the 10th annual OC Water Summit. As luncheon speaker, he will examine model water reliability practices and projects he has encountered during the course of his research in solving serious global water challenges.

This year’s Summit will take place on Friday, June 16 at the Grand Californian Hotel in the Disneyland Resort in Anaheim. Make your reservation now. NBC4 Weathercaster Fritz Coleman is master of ceremonies.

“Finding Water” is the title of this year’s program, which delves into essential new water supplies that could meet the needs of California through its recurring droughts and growing population and businesses.

This year’s program agenda of sessions starts with Dr. David Sedlak, “TED Talk” speaker and author of “Water 4.0: The Past, Present, and Future of the World’s Most Vital Resource.”

Jeffrey Kightlinger, general manager of the Metropolitan Water District of Southern California, and others will discuss improving statewide water supply reliability while protecting and restoring a healthy ecosystem in the Sacramento-San Joaquin River Delta.

Tapping into the sea as a reliable water source will be reviewed by a panel to include David J. Stoldt, general manager, Monterey Peninsula Water Management District, and Rich Nagel, general manager of West Basin Municipal Water District, whose communities are attempting to build desalination plants; and the Honorable Helene Schneider, whose city of Santa Barbara built a desalination plant, mothballed it and then decided to bring it back online.

Other sessions will feature notable speakers such as Colonel Kirk E. Gibbs, commander, Los Angeles District U.S. Army Corps of Engineers, and Marcie Edwards, former general manager of the Los Angeles Department of Water and Power and the city of Anaheim.

Currently in its 10th year, the OC Water Summit is an innovative forum that brings together hundreds of business professionals, elected officials, water industry stakeholders, and community leaders from throughout Southern California and beyond with a need and desire to learn about the evolving landscape of the water industry.

Co-hosted by the Orange County Water District (OCWD), Municipal Water District of Orange County (MWDOC) and the Disneyland Resort, this one-of-a-kind event engages experts and influencers in discussion of new and ongoing water supply challenges, water policy issues, and other important water-related topics that impact our economy and public health.

We thank our following sponsors :