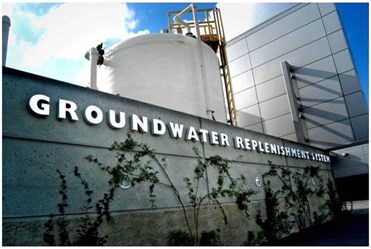 At the Sept. 21 OCWD board meeting, the Groundwater Replenishment System (GWRS) Final Expansion received a unanimous and enthusiastic vote—the first step towards the project’s groundbreaking. This visionary project keeps getting bigger and better.

When completed, this final phase of the world’s largest advanced water purification project of its kind will bring the total water produced to 130 million gallons per day, enough to fulfill the needs of 1 million people in north and central Orange County. Budgeted at $351 million, it is expected to go online by the end of 2022.

The OCWD board must approve additional items related to this project in order to fully authorize its implementation. These approvals will likely occur in October and November of this year. Next steps also include the District’s pursuit of funding for the project, which includes Proposition 1 grant funding, bonds, and State Revolving Fund loans that typically carry a low interest rate.

The GWRS is a joint project with the Orange County Sanitation District. It started with its predecessor, Water Factory 21 (WF 21), which was the first plant in the world to use reverse osmosis to purify wastewater to drinking water standards. It went online in 1976 and produced 15 million gallons per day of treated water, which was injected in a series of 23 injection wells to stop seawater intrusion.

When OCWD needed to expand WF21 and the Sanitation District needed to build a new outfall to the Pacific Ocean, they collaborated once more to create the GWRS, which went online in 2008, producing 70 million gallons of water a day. Its Initial Expansion, which was dedicated in 2015, brought the total to 100 million gallons per day.

During this current record-setting drought, now lasting five years, OCWD’s sound management of the basin and investment in water supply projects like the GWRS, have allowed the region to weather the drought better than other areas.

OCWD’s 19 member agencies are in a favorable water supply situation due to the District’s sound management.

I am happy to say that all OCWD member agencies were able to submit reports to the state that detailed a favorable three-year water supply outlook and because of this they are able to set their own conservation targets.

Overall, the GWRS has allowed its member agencies to pump more water from the groundwater basin. This saves them money as they do not have to purchase more costly imported water.

But the basin is still only 25 percent full and we need to refill it.

OCWD will continue to plan for the future to ensure a reliable water supply and will continue to explore all future possibilities for alternative water supplies. These include the GWRS Final Expansion and working with the U.S. Army Corps of Engineers to store more water behind Prado Dam. OCWD is also exploring ocean desalination to acquire 56,000 AFY.

We plan ahead, not on a year to year basis, but 30-40 years in advance to be prepared to meet the challenges of extreme weather on local and imported supplies and provide reliable, high-quality water for 2.4 million people in north and central Orange County.