Turkeys are the largest of the chicken-like birds, gamebirds, or terrestrial fowl. Close relatives include California natives like grouse and quails, as well as non-native pheasants and partridges (chukars). Turkey domestication goes back at least 2,000 years but modern-day mass production made turkey meat even more widely available. The bird’s name likely stems from British settlers associating them with their homeland forest fowl, turkey coq. or the country (Turkey) from which the birds were first wholesaled to Britain. The association between today’s Thanksgiving and the turkey was likely solidified about the time that the declaration of the official national holiday was made by President Lincoln in 1863. Turkeys were very abundant then. Everybody hunted, the birds are big enough to feed a family, and they taste good. Early settlers were big on feasts and celebratory occasions and in those days a bountiful fall harvest and full larder on the brink of winter shutdown was celebration worthy indeed. 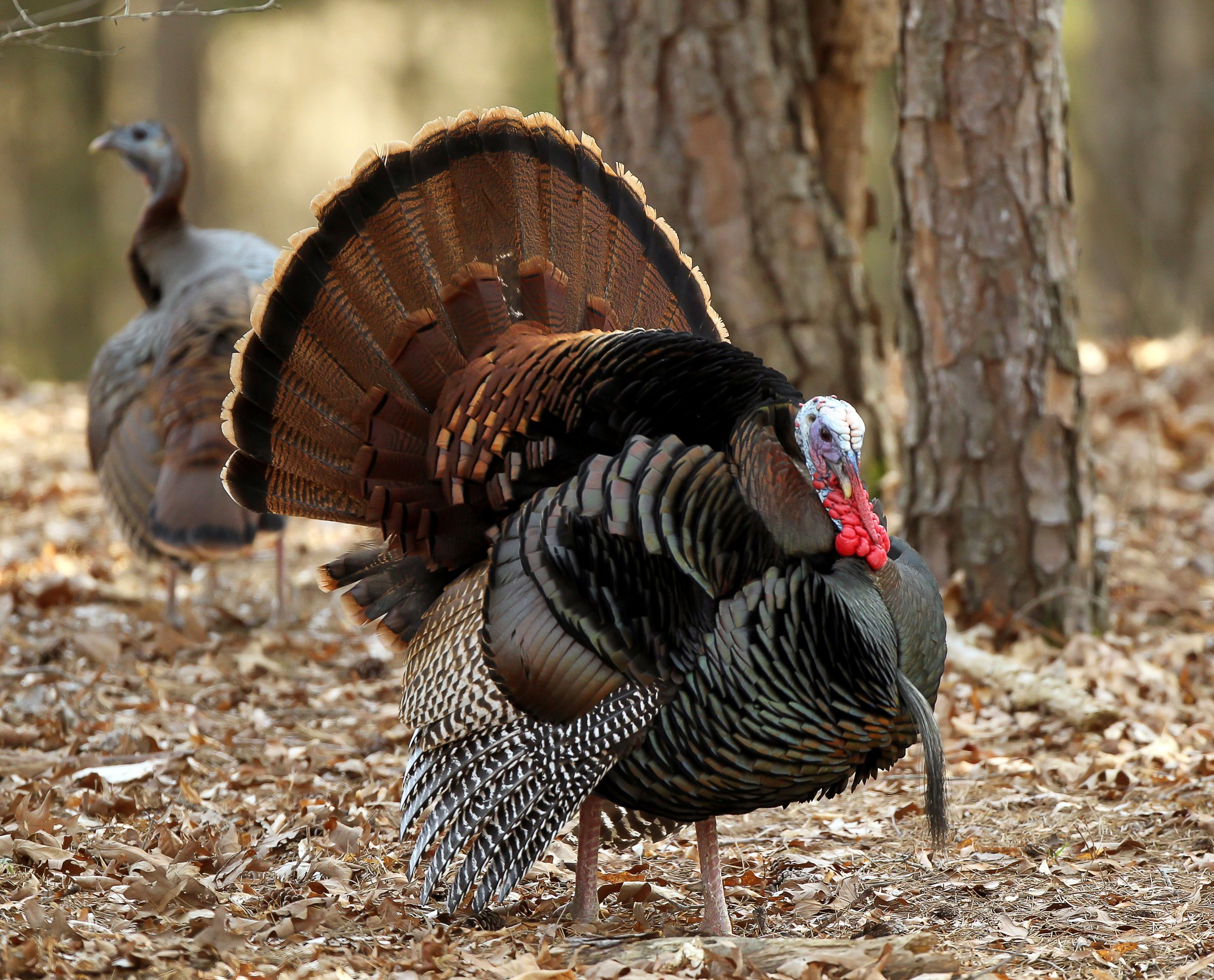 The native California turkey went extinct about 10,000 years ago at a time when North America was warming and drying, the glaciers were retreating, and Native Americans were overhunting the birds where they congregated at waterholes. The other North American species is split geographically into five subspecies, two of which were subsequently released in attempts to reestablish wild populations in California. The first documented release was by a private landowner on Santa Cruz Island in 1877. California Department of Fish and Wildlife (CDFW) raised hybridized stock for larger, more successful releases throughout the state in 1928-1949. Today, turkeys are found in 54 of the state’s 58 counties. Locally, they are more abundant in San Diego County but have been established in the Cleveland National Forest.

Wild turkeys are dwellers of open woodlands They are omnivores but primarily eat plants, fruits, nuts, acorns, tubers, and they are polygynous ground-nesters. The female scoops a shallow depression in the soil about a foot long and slightly narrower in width, often in leaf litter, and lined with local dried plant material. She lays four – 17 eggs, colored pale yellowish tan, speckled with reddish brown flecks. With no help incubating nor raising the poults, the female must leave her nest briefly to forage during the 30-day incubation period but may fast over several consecutive days. Turkey hatchlings are precocial, active almost immediately, nestlings for merely a day. The young gain flight at three – four weeks of age but may stay with mom for up to four months. Upon independence, the young flock together, segregated by sex and age. Young males (Jakes) form their own flocks, separate from the flocks of older males (Toms), younger females (Jennys), and older hens. Unlike a “murder” of crows, a turkey flock is a “rafter”; they seek height at night, usually flying into the lower branches of a tree at sundown, working their way onto the highest boughs to roost in the “rafters” of that temporary dwelling.

Like turkeys, the other wildfowl of the California uplands mostly flee on foot from intrusion but sometimes hold tight, particularly on windy days until a hiker is nearly on them. Then, they burst into flight with a disarming thunder of wings. When they flush underfoot, the racket that a six-ounce California quail can flap up is astounding. Like their chicken relatives, these stocky brush fowl are built for short, quick flights with strong, meaty leg (endurance muscle, dark meat) and breast muscles (less often used, well-rested, white meat), hence their appeal to the hunter. 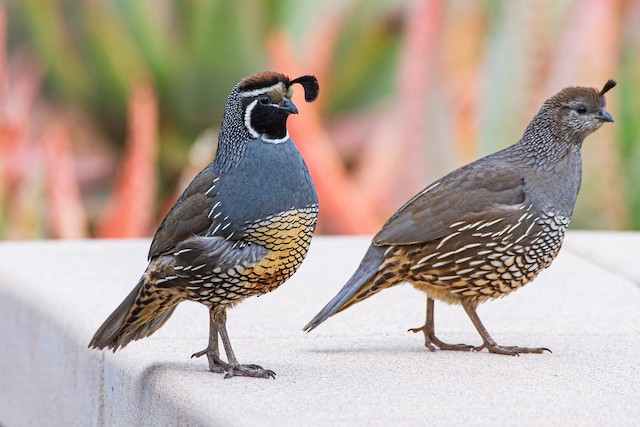 Of all California birds, quails are singularly adorned and recognizable by their head plumes or topknots. The California quail’s is longer, more bulbous and drooping in the male than female, about the length of the heads’ width, whereas the mountain quail sports a much longer, more upright, and slender plume. Both are grey and brown birds with white striped flanks and face outlines. The mountain quail is 30% heavier than the California quail and gets up into the coniferous forests of the mountains whereas the California quail is a foothill bird. In the 1960s, both species were abundant in the area around Saugus. Besides their iconic three-note call, “Chi-ca-go” (kind of) from a male sentinel perched high in a shrub above his foraging covey, my favorite quail encounter is of a family walking along a trail in single file, chicks flanked by the adults in synchronized motion, like a quail train moving down the track.

The second largest of the chicken-likes living in California is the sage-grouse, the largest of the North American grouses with males up to seven pounds and females three pounds lighter. These are residents of dry sagebrush scrub in the northwestern United States. Males advertise and compete for females, strutting their stuff on traditional breeding grounds focused in small areas, called leks, some of which have been in use for a century or longer. From roughly March through May, males gather on the leks at dawn to attract mates with tail fanned erect, the male gulps air, standing tall with inflated chest held high, he tilts his head back, rapidly inflating, bouncing, and deflating the yellow, balloon-like pouches on his chest creating a series of echoing pops. These displays are performed up to 10 times per minute for several hours in the early morning. Despite all the machismo, the females are in charge. The female chooses a mate by crouching, spreading, and drooping her wings slightly before him. Many females choose the same male, leaving most males on the lek unpaired. After mating, males have no further contact with the females or the young.

The other California grouse is the sooty grouse, formerly blue grouse of the northern coast ranges and Sierra Nevada. They weigh in at over two pounds, dwell in the forest, eat plants and insects, and have their own unique male strutting display and call. The males’ nuptial calls resonate like blowing across the mouth of a jug, reminiscent of an owl’s hoot, sometimes from 100 feet up in a pine tree. Focused upon the trail ahead and the mountain silence, I reflect and remember fondly the rush of past encounters with these grey-brown beauties unexpectedly flushing from above.

Without grousing on about it, there is but little room left here to give the final two gallinaceous birds their full due. Both are beauties of the California wildlands and are raised at Prado Dam, sometimes escaping pen and hunter. They are handsomely marked birds – the ring-necked pheasant of Eurasian origin, long tailed and brightly caped, red and green in the males with a white neck-ring, a signature trophy of gentleman hunters. These pheasants were first released in California around 1880 and farm-reared by CDFW from 1908 – 1918, on a larger scale in 1926 – 1945 and released into every county, as well as many states across the country. They established breeding populations in many counties, particularly those with old-timey farms with hedgerows and fallow fields but have not done well in recent years due to drought, changing farming practices, pesticides, and predation by growing crow and raven populations. 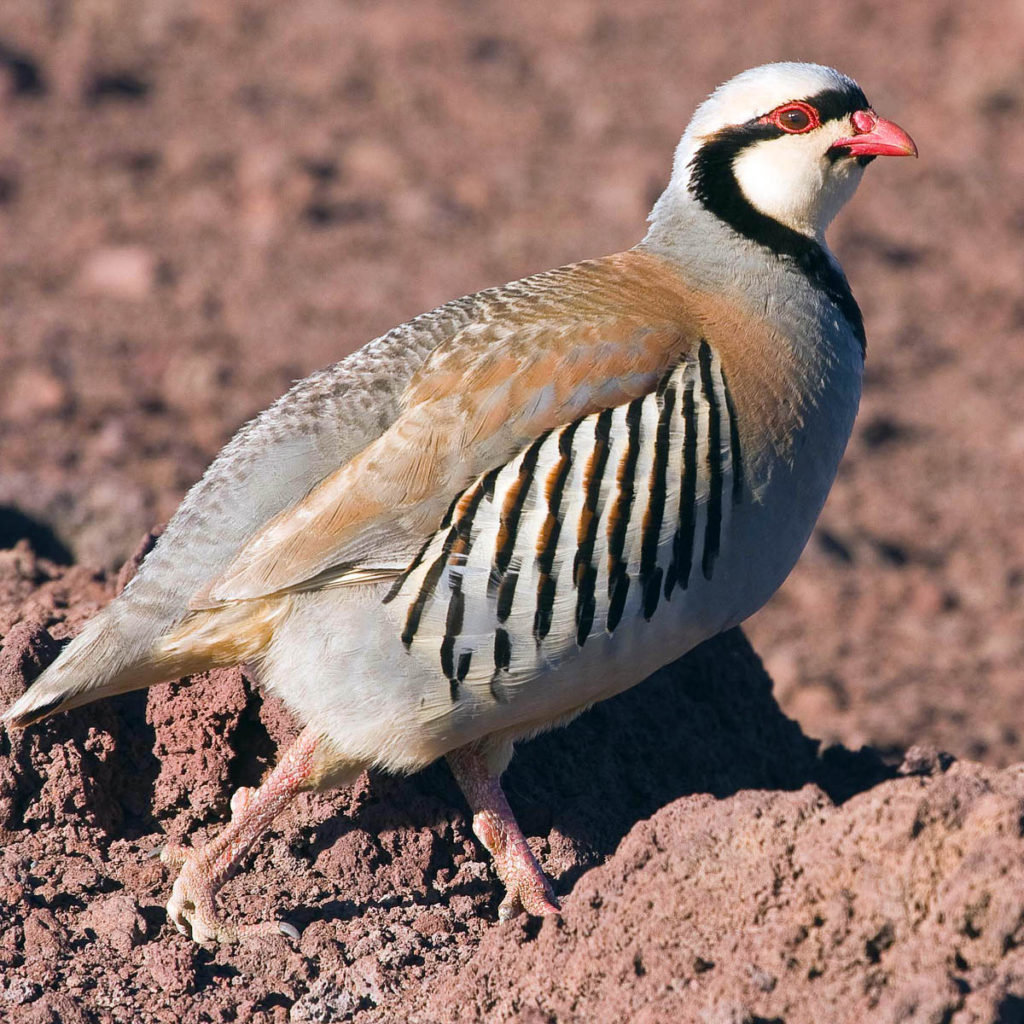 As for the chukar, integrating plants and bird study for my master’s thesis bought me two years in the backcountry of the China Lake Naval Weapons Station documenting their food habits and behavior. Chukars were introduced from India and established in the high deserts of California. These birds occupy rugged terrain and frustrate many hunters by running well ahead, then flushing across deep canyons, costing a lengthy, treacherous traverse to continue pursuit. They weigh over a pound each, about the size and taste of a Cornish game hen, only better.

Enjoy your roasted turkey with all the fixings. As for us, putting this to paper has given me a hankering for pheasant under glass, or maybe chukar this year! Happy Thanksgiving!