2020 was only an average water year (total rainfall of 14 inches) but the timing of the rains was very beneficial, resulting in a banner year for the endangered Least Bell’s Vireo and other riparian birds. At least one vireo hung out on District property into the winter. OCWD is partnering with grant funding from Proposition 84 on another 640 acres of Arundo removal from the Santa Ana River Watershed. A renowned raptor biologist favorably compared the health of our Prado raptor populations to those on Camp Pendleton and in the Santa Monica Mountains at a time when SoCal populations of birds of prey are otherwise disappearing. The Sediment Demonstration Project was completed in the Prado Basin, but another major fire burned 1,000+ acres. 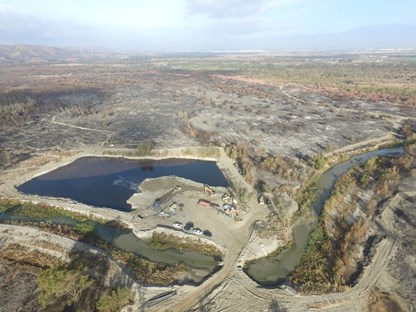 Prado Basin wildlife populations fare as well as the productivity and health of the habitat growing there allows. The big 2020 bird populations happened with the support of abundant and timely rainfall. In 2019, the water conservation pool stayed above 498 feet from mid-January through mid-April, and up to 505 feet intermittingly from mid-February through March; piggyback that in 2020 with the pool staying above 505 feet in April and above 498 feet until the end of May. Two successive years of abundant rainfall and conserved water produced lush plant growth and a lot of food for wildlife.

Consequently, OCWD biologists and partners documented the largest breeding population of endangered Least Bell’s Vireos ever seen on the Santa Ana River in 2020, by far the largest in existence anywhere in the world. There were 719 male breeding territories in the Prado Basin and 1,574 territories on the river outside the Basin, for a total of 2,293 territories. This is a 16% increase over 2019. There were only 12 vireo breeding territories in the early 1980s, when OCWD stepped up to partner in management and monitoring of this then critically endangered bird.

This incredible recovery happened on the shoulders of OCWD’s environmental commitment, ongoing efforts in the Prado Basin, and the restoration and wildlife management program that OCWD expanded to watershed-wide in the late 1990s with the founding of the Santa Ana Watershed Association (SAWA). SAWA’s Arundo control program resulted in thousands of acres of restored river-bottom habitat over the past two decades. These efforts continue today with funding from Proposition 84 with which we are cleaning up patches from near the 60 Freeway down into Prado. SAWA biologists monitor the nesting birds in that habitat over much of the watershed outside Prado Basin, and with us, have witnessed the steady recovery of the river forest, as evidenced in part by the increase in birds, including vireos and several other species that were once quite rare.

Nearly as unusual as such large vireo numbers, a vireo lingered into the winter of 2021 and was territorial enough in our restored habitat on the edge of Burris Basin to scold a birder there on New Year’s Day. Least Bell’s Vireo normally migrate into Southern California in spring to breed along our rivers and streams but head south into Mexico at summer’s end. Rarely in the past has there been an individual that lingered into winter, but usually it is a fledgling from a very late nest. Since we did not document vireos nesting in the Burris habitat in 2020, it is unclear from whence this dawdler hailed.

Prado Basin comprises some 12,000 acres with even larger open spaces adjoining. The District owns 2,150 acres of the basin lands but monitors and manages wildlife in partnership with the U.S. Army Corps of Engineers (Corps) and others over the entire basin. Dr. Peter Bloom, an eminent field biologist who focuses upon birds of prey, hawks, eagles, and their kin, documented Prado raptor populations in 2006 and again in 2020 under contract with OCWD. Dr. Bloom and his field team found medium to large raptor nesting populations that were healthy, reproductive and thriving in the basin in contrast to most of Southern California where a myriad of environmental issues is responsible for catastrophic declines. The Prado Barn Owls nested in the 13 boxes OCWD biologists manage for them and produced second clutches in eight, and a third clutch in one. Barn Owls cumulatively produced 104 chicks in 2020, consuming thousands of rodents in the process. One of the banded chicks was seen again in the fall in Laguna Beach. The health of apex predator populations like those of our large birds of prey is perhaps one of the best indicators of environmental productivity and health. The Prado Basin is in great shape, sediment accretion notwithstanding.

Prado Basin is a flood control facility with a dam that does not pass much sediment, and as a result, sediment is accumulating over time in the basin. OCWD studied this issue because that accumulation is filing in the lower elevations that OCWD depends upon for water conservation. The latest step in that study was the implementation of the OCWD Sediment Demonstration Project. The demo project was a great success. Approximately 84,000 cubic yards of sediment were removed from a 10-acre site on the Santa Ana River in the basin, about 1.3 miles from the dam and the most looming questions about sediment removal were answered. Large earth-moving equipment was used to dig sediment and dump it into a hopper where it was mixed into a slurry and pumped through a 16-inch, high density polyethylene pipe one-half mile to a 20-acre settling pond and storage site below the Corps office on the south basin edge. So much wood and other debris were mixed in with the sediment that it was determined that dredging in the basin was a poor option, but the novel slurry technique worked well. Amongst the excavated debris were 36 scraper tires, five to six feet in diameter, dumped long ago but now properly disposed and recycled. Sediment removal would have continued but a fire erupted near the Corona Airport that eventually melted 800 feet of the slurry conveyance pipe.

The fire burned from east to west, fanned by Santa Ana Winds, scorching 1,087 acres. It burned largely in the footprint of the 2015 Highway fire that took out at least 400 acres of Arundo for us. This fire path runs along a dry bulge through the basin where water channels are scarce, and groundwater goes deep in drought. In part to leave these newsy bullets on a higher note, the latest fire burned through Arundo control areas and did not seem to have the same intensity as the 2015 fire. Most of the trees may well survive, particularly those right on the stream courses through the basin. The fire seemed to stop at the well-watered trees and fire fighters did the rest.

It’s always something in the wilds of Prado Basin. I can hardly wait to see the fire recovery and what else 2021 holds.