The wildlife that OCWD’s Natural Resources Department staffs expend the most effort monitoring and managing are birds and fishes, so you have not heard much in these newsletter stories about large animals, although the Bald Eagle is certainly no small fry. Birds occupy the available niches, environmental cubbies, such that their abundance and diversity is an excellent indicator of environmental health. For example, we track the endangered Least Bell’s Vireo and its habitat as an indicator of riparian health to reveal the strengths and weaknesses in our stewardship, so we can adapt management strategies as needed. The megafauna of the Districts’ wildlands are out there, but how well those populations are doing is positively inferred from the overall health of the Prado ecosystem and incidental observations rather than by detailed study. Many of these species are most active in low light, crepuscular, or darkness, nocturnal. 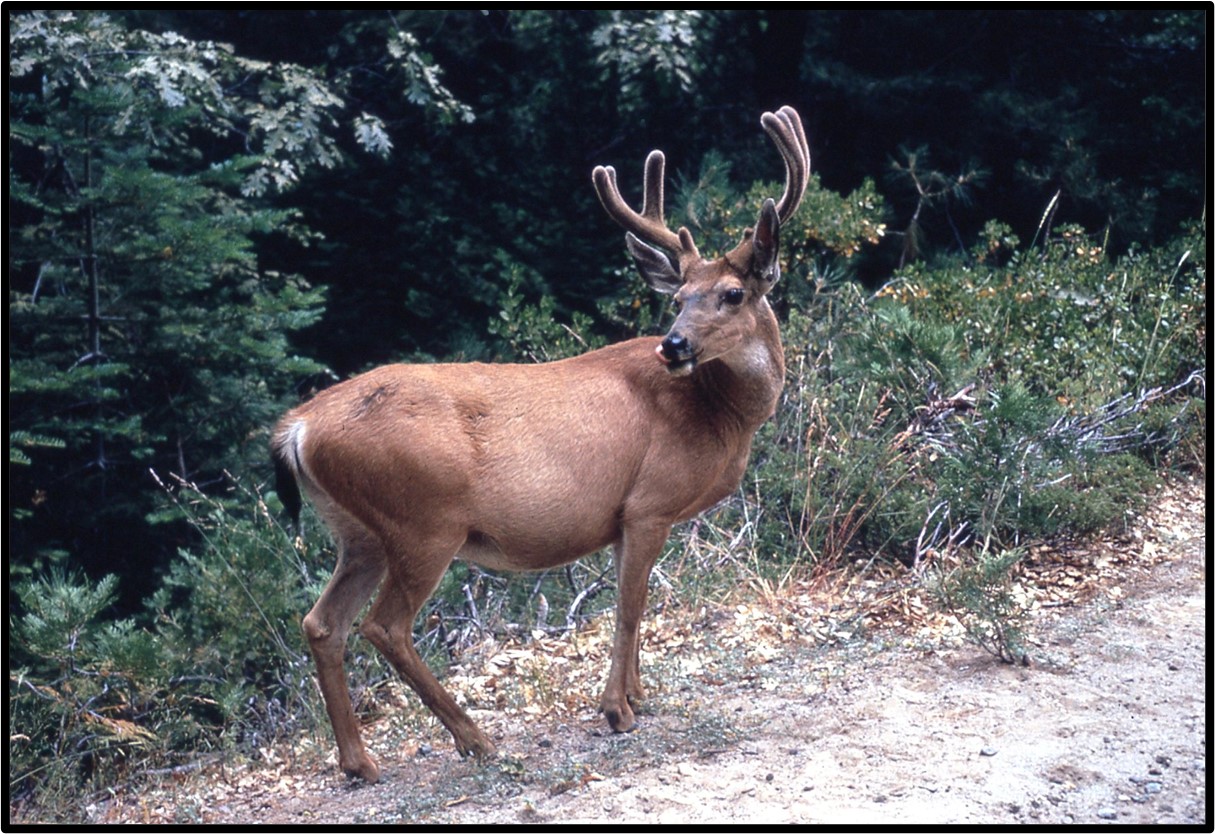 The Mule Deer is the largest native herbivore in the Prado Basin. Bucks average about 200 pounds, exceptionally to over 400 pounds; does are smaller, weighing in at 95 – 198 pounds. Our deer are browsers of shrubs, trees, and forbs as opposed to grazing mostly on grasses as do cattle, bison, and rabbits. Deer herds are generally multigenerational groups of related females. Males typically are solitary or seen in small groups except during the rutting season in the fall. The males carry antlers (bony in contrast to horns which are keratinaceous) that are dropped annually in winter and regrown, starting immediately after shedding. Females usually birth two spotted fawns in spring following 190 – 200 days gestation. The young are independent after 60 – 75 days. California Mule Deer follow traditional migration routes to take advantage of browse that is seasonally available, usually at higher elevations. That has got to be a bit different in Prado, given the seasonal pool with its log jams, size, and persistence in some years. Also, local habitat adjacent to Prado Basin is confined to narrow corridors along the creeks and river, and up into the Chino hills. A study of the Prado herd’s movements and lineages was proposed by the United States Geological Survey (USGS) but never unfolded.

Deer sightings are sporadic in Prado Basin but became noticeably more abundant in recent years. I have been delighted to come upon them, close enough to see their characteristic predator-escape locomotion, springing away, stiff-legged up and down with all four legs touching the ground at once, then rebounding like on pogo sticks, called stotting or pronging. The trails and roads we rely upon for surveying wildlife and to access project features like the recent Sediment Demonstration Project comprise important travel lanes for large mammals as evidenced by the abundance of sign. Tracks and scat are telltale, but you need to know how to decipher deer from pig. Both are cleft-hooved (two-toed imprint) but the deer toes are more pointed and the dew claw is smaller, round and centered below the toe like the dot in an exclamation mark. Alas, the dew claws often don’t show. Based upon the sign, pigs are generally more abundant than deer. 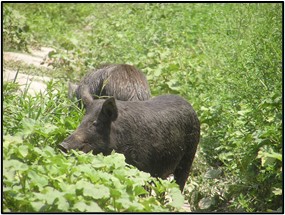 The Prado pigs are feral, escapees or released purposely for hunting. The first feral pigs in California were from livestock imported by Spanish and Russian settlers. A Monterey County landowner released larger, more aggressive European wild boars in the 1920s that subsequently hybridized with escaped domestic stock. Today, there are feral pigs in 56 of the state’s 58 counties and they mostly are considered a nuisance because of turf, agricultural field, and habitat damage along with disease transmission to livestock. In 1957, the feral pig was designated to be a game animal by the state legislature and as of 1992, a tag must be purchased from the California Department of Fish and Wildlife to legally take a pig in California. Pigs are omnivores that will eat just about anything; roughly 85% of the diet is plant-based but live and dead animal matter is consumed opportunistically. A large band of wild pigs, also called a herd, sounder, drift, drove, passel, or team can bulldoze through a football field in a single night’s foraging, rooting for tubers, bulbs, grubs, and leaving a churned mess in their wake. Multi-agency control programs have removed thousands of pigs from Santa Rosa, Santa Cruz, and the Santa Catalina Islands, as well as across San Diego County and other areas of the country but not yet in the Santa Ana River watershed. Few pigs are likely taken by native predators. 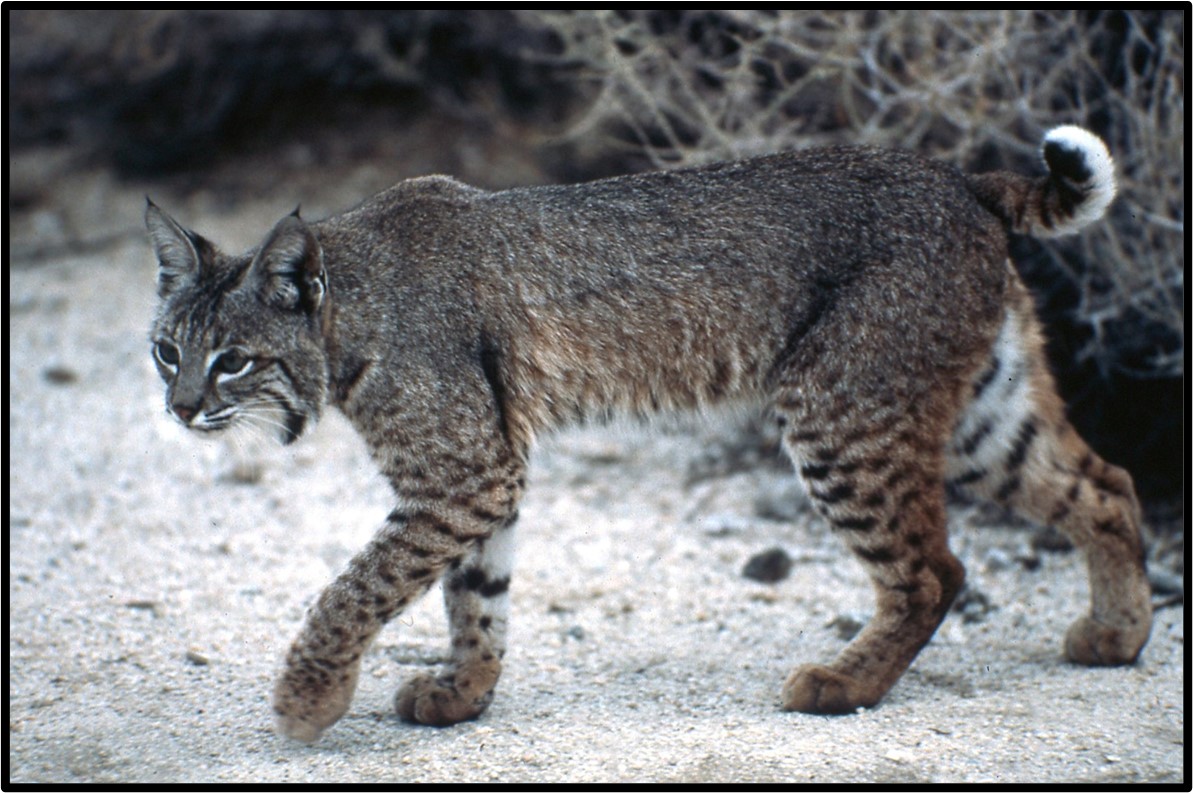 Mountain lions are the largest of our native predators and may dine on pigs upon occasion, but studies have shown that swine predation by cougars is insufficient to advent even local control of pig populations. Furthermore, there is no recent evidence of a cougar venturing into the Prado Basin from the Chino hills to the west where they are regulars. The cougar is the largest of two cats native to California.

Our more numerous, smaller cat is the bobcat. They are common in Prado but seldom seen out and about due to their secretive nature and mostly nocturnal habits. I was threatened by a bobcat once whose menacing growl I initially mistook to be the drone of a distant motorcycle, thinking it was nothing serious. Then I caught sight of its head just over the scrub, its menacing stare, unwavering focus on me, and I froze. The cat leapt onto the trail, blocking my advance and the tempo of the growl got a bit scarier. I started to back away and was rebuffed by the bounding cat that was working me like a dog trained to herd sheep. So, I stayed put, telling it what a nice kitty it was, until it just left. The entire encounter lasted perhaps a minute but seemed like 30. A trifle unnerved, I moved down the trail cautiously singing bobcat praises, happy to be alive, unscathed, and then, there safely nestled in a tree just off the trail were two bobcat kittens. 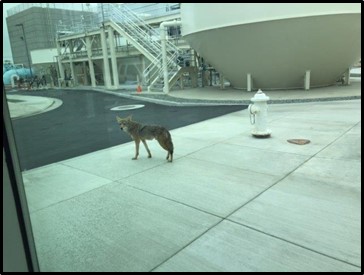 Of the nocturnal predators, bobcats and coyotes were photographed in Prado on trail cameras, but coyotes are more abundant. The cats are strict carnivores whereas coyotes are generalist feeders that take advantage of anything nutritious and abundant, giving them a clear edge. The coyotes’ adaptability has led to population increases across the U.S. along with more clashes with people as their abundance grows near and in cities. Problem animals are usually the result of conditioning by people who purposely or inadvertently teach them to associate people with food. A recent case involved biting issues near Lake Perris including an associate who was nipped while out inventory-trapping small mammals. Game wardens were able to trap and verify lineage of the responsible dog family and their issues were traced back to misguided human provisioning. The rap that a few bad dogs give the breed is a shame because the coyote exerts essential control of small mammals including smaller predators in the wild.

We see our native dogs trotting along the Prado roads, ousted by the approaching vehicle, or bursting from cover before us on trail, but nearly as common are raccoon sightings, or at least their sign. The front paw leaves a small handprint, the back with elongated heel. Most recent daytime sightings in Prado are of adults with kits that do not stay in view once they know they have been spotted. They are particularly common around the treatment wetlands.

Once again out of space with many more tales to tell, this has been only a glimpse at our most common large mammals, night prowlers of the Prado Basin.