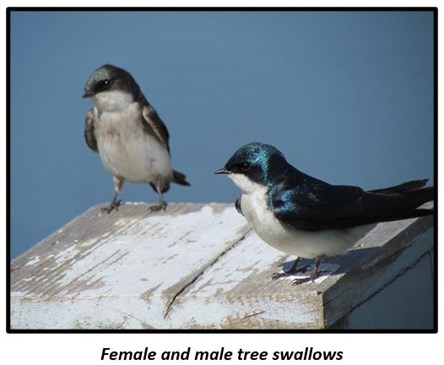 Picturing a bird nest for most of us conjures the image of an intricately knitted, cozy cup of twigs hung in the branches. There are also dozens of bird species that use tree cavities and crevices to nest and roost and some are found on Orange County Water District (OCWD; the District) lands in Orange and Riverside counties.

Some birds are year-round local residents; others migrate here, but most don’t excavate their own holes. The primary cavity-nesters are the woodpeckers. They not only provide nest holes and cover for many other wildlife species, they promote natural tree-decaying processes, and consume huge numbers of insects. Woodpeckers excavate their nesting holes during courtship. Their vacated holes are quickly occupied by secondary cavity nesters like swallows, bluebirds, and even one type of duck and several raptors.

To boost the supply of cavities for nesting birds and control against invasive avian species, and insect and rodent pests, OCWD has an extensive nest box program, primarily targeting five native birds and mostly in an area it manages at the Prado Basin in Riverside County.

OCWD’s nest box program started with and still focuses upon tree swallows, small songbirds with long, pointed wings and short, notched tail. The males are a dark, glossy blue-green above and white below, females are duller with hints of brown and juveniles are brown above. TRES are insectivores that capture mouthfuls of insects in flight. They consume such large quantities of flying insects that they effectively control populations of midges and mosquitoes along the Santa Ana River, better than and in-lieu of pesticides.

TRSWs migrate here each spring from Mexico and nest into the summer. They lay five to seven eggs and some early arrivers raise two broods in a single season. They incubate for 11-20 days and hatchlings literally fly-the-coop, or fledge, in 15-25 days. From 2012 through 2019, 6,098 TRSW have fledged from our boxes in Orange County and have eaten literally tons of flying insects.

Western bluebirds are also cavity nesters and readily nest in swallow boxes, particularly those hung high in trees. The males of these small thrushes sport deep, blue heads, throat, back and tail; rusty chests and grayish white belly; females are a duller blue and gray with pale orange on the breast. These resident birds are largely insectivores, also feeding on fruits and seeds when insects are scarce. They typically forage in low, open cover, greenbelts, lawns, parks, and golf courses where they can scan from a higher perch and descend after insects are spotted in the nearby turf. 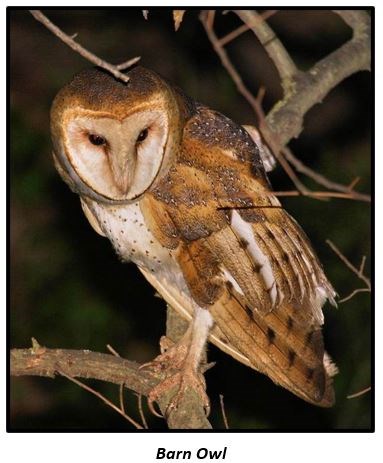 Barn owls are the most widely distributed owl in the U.S. They are lightly marked overall with fawn-colored back feathers and usually white undersides. The heart-shaped face is white with large dark eyes. They are nocturnal; hunting low over open terrain, using sight and sound. BAOW vison is excellent, even in low light, and hearing is so precise that they can strike prey in total darkness. They eat mostly rodents that include gophers, deer mice, small rats, shrews, and young rabbits. They also sometimes take birds, lizards, insects, and rarely frogs or fish. Usually three to eight whitish eggs are laid and one or two hatchlings are raised per year. Youngsters are roughly 55-65 days old at first flight but return to sleep in the box or nearby for several more weeks.

OCWD started BANO box deployment in the early 2000s in response to rodent takeover of endangered bird nests and to combat chewing of electrical wiring in vehicles and equipment stored at Prado Basin. The year 2020 is shaping up to be a banner year for BANO with most of the 15 boxes occupied and double brooding. As with many wild species, BANO reproductive success is linked to available prey which is greater following a year or two with above average rainfall.

OCWD first allowed deployment of wood duck boxes around the Prado Wetlands in 1999 by a volunteer, Gordon O, an advocate of waterfowl conservation and hunting. After Gordon retired, staff continued the box deployment in 2016 with assistance from the California Department of Fish and Wildlife volunteers.

The male WODU is the most colorful of our waterfowl, sporting every color of the rainbow but unlike most, these ducks nest in trees. The female-selected cavity or box has been higher than 250 feet off the ground and the eight to 12 ducklings are active within hours of hatching. They follow the hen out the cavity entrance, jumping safely to the ground usually the day after hatching, and then on to the nearest waterbody. The hatchlings are little fluff-balls, protected by thick down. From 2012 to 2019, 2,913 WODU chicks have hatched from our boxes.

The American kestrel (AMKE) is the smallest of our common day time raptors in Southern California and most common falcon in North America. They are pale below and warm, rusty-brown spotted with black above, and a black band near the tip of the tail. Males have slate-blue wings; females’ wings are reddish brown. Both sexes are helmeted with pairs of black vertical slashes on the sides of their pale faces, contrasting with white cheek and chin.

They hunt mostly by watching from a high perch, swooping after prey but also “helicoptering” over open hunting grounds. Individual kestrels often specialize on one particular kind of prey. They mostly eat large insects; grasshoppers are favorites, but also small mammals, birds and reptiles.

We have deployed a couple of kestrel boxes in the Prado Basin and one of those produced three fledglings in 2016. There’s been no successful nesting in AMKE boxes since then partly because their boxes are favored by European starlings that quickly reoccupy them although repeatedly ousted by OCWD staff.

Providing boxes for cavity-nesting birds in Prado (since 2002) and Orange County (since 2012) has resulted in a minimum of 14,968 tree swallow fledglings and thousands of other cavity nesting birds. Throughout the years, OCWD’s swallow box occupancy rate has consistently been over 70%, considerably higher than in many other sites across North America. Nest box programs like OCWD’s, help compensate for the loss of large trees and extensive forests that have been reduced upwards of 90% in Southern California.

Cavity-nesting bird management and conservation generates an inherent duty to manage responsibly. Significant time and care must be expended seasonally—deploying, maintaining, and monitoring the nesting boxes for issues, such as invasive non-native ants, for example. However, the results show tangible benefits including non-pesticide, controlled insect populations; rodent control without poison; and the satisfaction of compensating for the loss of historic forests by bolstering populations of some of the wildlife dependent on miniature caves.