OCWD AND EPA SAVE RATEPAYERS $79.4 MILLION 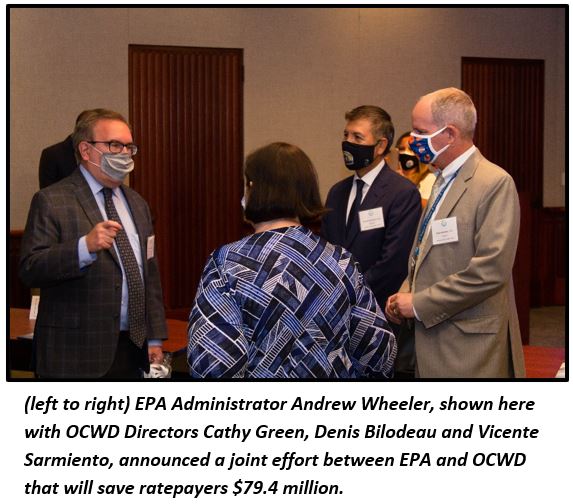 Joined by leadership from the Orange County Water District (OCWD; Water District) and Orange County Sanitation District (OCSD; Sanitation District), U.S Environmental Protection Agency (EPA) Administrator Andrew Wheeler toured the Groundwater Replenishment System (GWRS) on Sept. 3, 2020, where he announced a joint effort that will save ratepayers $79.4 million. Officials from EPA and the Water District made this savings possible by updating a Water Infrastructure Finance and Innovation Act (WIFIA) loan that was granted to OCWD for use toward the ­constructi­­on of the GWRS Final Expansion.

In 2018, EPA granted a $135 million WIFIA loan to OCWD to help finance the 30-million-gallon-per-day (MGD) final expansion of the GWRS, a $282 million project. The initial 70 MGD GWRS project came online in 2008, followed by a 30 MGD expansion in 2015. The second and final expansion of the GWRS will make the world’s largest reuse project even bigger, taking it to its ultimate capacity of 130 MGD ― enough water to meet the daily needs of 1 million people.

“The WIFIA program supports the financing of our nation’s public water infrastructure and we are proud to be a recipient of this critical public funding that helps lower the cost of the GWRS,” said OCWD President Vicente Sarmiento. “We continue to make significant investments in this project because it increases local water reliability and quality for the 2.5 million people in our service area. Producing some of the lowest cost water in the region, it has also helped weather multi-year droughts and has decreased the region’s dependence on imported supplies. With benefits to the community, the economy and the environment, this project has been hailed as a model for the rest of the world.”

OCWD’s original 30-year WIFIA loan was established at an interest rate of 3.06% and was updated with an interest rate of 1.04%. This reduces OCWD’s annual loan repayments by $2.6 million and lowers the cost of water for the 19 cities and agencies served by the Water District.

“This cost-saving update showcases a key flexibility of EPA’s successful WIFIA program that is allowing the Orange County Water District to save ratepayers even more money while doubling down on its efforts to improve drinking water quality and protecting public health,” said EPA Administrator Andrew Wheeler. “Through WIFIA, EPA is playing a critical role in President Trump’s efforts to upgrade infrastructure and benefit communities across the nation.”

A joint project of OCWD and OCSD, the GWRS purifies wastewater from the Sanitation District, that would have been discharged to the Pacific Ocean, and puts it through a three-step advanced purification process consisting of microfiltration, reverse osmosis and ultraviolet light with hydrogen peroxide. The result is high quality water that’s injected into a seawater barrier and pumped to recharge basins where it naturally percolates into the Orange County Groundwater Basin managed by OCWD. GWRS water accounts for one-third of the water that is put into the basin―an asset that provides up to 77% of the water for the region.

“The Orange County Sanitation District sees wastewater as a resource and I’m proud of the work that the Water and Sanitation Districts have done to fully utilize it,” said OCSD Board Chairperson David Shawver. “We applaud EPA for administering the WIFIA program; its financial support allows us to implement a project that will recycle 100% of OCSD’s reclaimable flows―an industry first!”

Construction of the GWRS Final Expansion will be complete in 2023. For additional information about this fiscally responsible water supply project, please visit www.ocwd.com/gwrs.