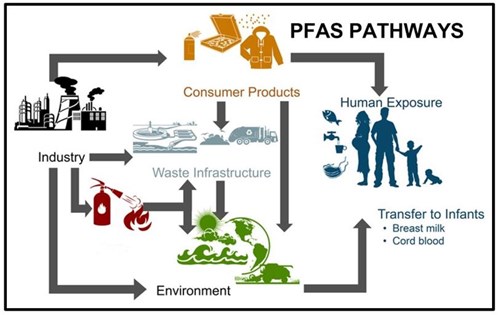 In early February, the California Division of Drinking Water (DDW) issued new RLs for perfluorooctanoic acid (PFOA) and perfluorooctane sulfonate (PFOS). Also known collectively as PFAS (per- and polyfluoroalkyl substances), these are manmade, heat-resistant chemicals that are prevalent in the environment and were once commonly used in many consumer products to repel water, grease and oil. PFAS have been used for decades in hundreds of industrial applications and consumer products such as carpeting, apparels, upholstery, food paper wrappings, fire-fighting foams and metal plating.

Since 2016, water agencies in Orange County and across the country have followed an EPA Lifetime Health Advisory regarding the maximum recommended concentrations of PFOA and PFOS in drinking water at no greater than 70 parts per trillion (ppt). While not a mandate, the state’s lower Response Levels of 10 ppt for PFOA and 40 ppt for PFOS are prompting additional steps from water agencies throughout Orange County.

The action by Orange County water agencies to take more than 40 drinking water wells in north and central Orange County out of service this year will temporarily result in increased reliance on costlier water supplies imported from Northern California and the Colorado River. In the long term, water agencies in Orange County are planning on constructing and operating new treatment systems that will remove PFAS from drinking water wells. Agencies are aiming to have the new treatment plants running within two to three years.

With these wells out of production, we need to explore other ways to meet water supply demands. We can rely on more imported supplies in the near term, but for the long term we need to be able to use our local groundwater supplies. New treatment facilities will allow us to do that.

OCWD and its retail water agencies are working collaboratively to address this critical issue and have adopted a PFAS policy that reflects an all-for-one and one-for-all management approach. OCWD will be helping all affected water agencies with the cost of treating for PFAS. The District has also committed to paying for the capital costs of constructing new treatment facilities for its retail water agencies, as well as half of the operations and maintenance costs.

Last year, the state lowered the “notification levels” (NLs) for PFOA and PFOS, and water agencies throughout Orange County were required to inform local governing bodies of any wells that exceeded these levels. The state also launched the beginning of the public health goal (PHG) process in the fall, which will ultimately lead to the establishment of enforceable maximum contaminant levels (MCLs) for both PFOA and PFOS. OCWD supports establishing state and federal MCLs for PFOA and PFOS that rely on the best available science.

The U.S. Environmental Protection Agency has recently announced its proposal to regulate PFOA and PFOS in drinking water by making a preliminary regulatory determination for the two contaminants, as required under the Safe Drinking Water Act. Once the official notice is published in the Federal Register, a 60-day comment period will begin.

The Orange County Water District and the water agencies it serves provide some of the cleanest drinking water in the world. All 19 retail water systems in OCWD’s service area follow drinking water quality guidelines and regulations established by state and federal agencies.

For more information about this issue, OCWD has established a special PFAS page on its website with a fact sheet, video and other useful information.