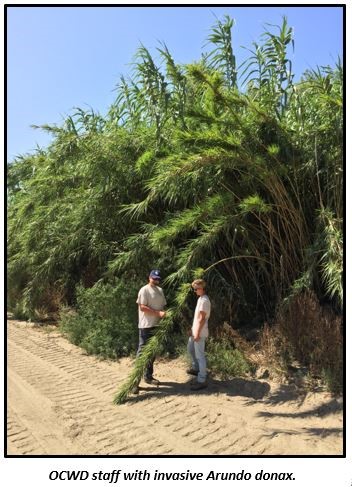 While a biologist with the U.S. Fish and Wildlife Service, I teamed up with a state warden who staffed the California Department of Fish and Wildlife’s newish Streambed Alteration Agreement Program in the early 1980s. We worked dozens of permits together and zealously restored many acres of habitat for development projects along the Santa Ana River. Astoundingly, just a decade later, every acre of that new habitat was gone, choked with Arundo donax. We learned an expensive lesson: traditional mitigation wouldn’t work with this invasive grass that already covered half the river floodplain and was creeping into the rest.

Arundo donax resembles skinny bamboo. It became so prevalent, so quickly on the Santa Ana River that it angered people and roused some to action. Very unusual partnerships were made; there’s something for everyone to hate about Arundo donax.

Giant reed provides no redeeming wildlife value; it carries fire, obstructs flood flows in channels, and piles up on beaches leading to expensive beach cleanups. Compared to native habitat, it provides poor stream shading, impacting water quality; has ruined bridges, like the River Road Bridge on the Santa Ana River; and consumes three times or more water than native vegetation. Arundo donax consumed an estimated minimum of 18.3 billion gallons of water annually from the Santa Ana River prior to being brought under control.

OCWD began Arundo control in March 1991, when it joined the U.S. Fish and Wildlife Service, the U.S. Army Corps of Engineers and The Nature Conservancy in an environmental enhancement and water conservation program agreement for Prado Basin. The Orange County Water District owns 2,150 acres of the basin and created the Prado Constructed Wetlands near Prado Dam to enhance water quality by removing nitrate and other pollutants in the Santa Ana River water that flows to Orange County. This and other joint agreements allow OCWD and the U.S. Army Corps of Engineers to capture stormwater at Prado Dam for recharge in Orange County—providing a local water supply and saving millions of dollars each year.

Eradication of the giant reed would positively impact OCWD’s efforts and greatly help in the restoration of the endangered least Bell’s vireo population, a big part of the District’s environmental stewardship program to this day.

The Nature Conservancy accomplished its program mandates in 1993. Meanwhile, the U.S. Fish and Wildlife Service and the U.S. Army Corps of Engineers were devising a strategy to offset the potential environmental impacts of installing the massive Seven Oaks Dam near the Santa Ana River’s source in the San Bernardino mountains. Armed with anti-Arundo fervor, the U.S. Fish and Wildlife Service sent the U.S. Army Corps of Engineers a letter in 1994, proposing that the $1.35 million slated for plantings be, instead, used to start a watershed-wide attack on the giant reed beginning in the upper watershed, near the dam.

Then in 1995, a more permanent water conservation agreement was signed by the Orange County Water District and the U.S. Fish and Wildlife Service known as the Prado Basin Cooperative Agreement. The agreement consisted of: 1) a District contribution of $1 million to The Nature Conservancy to be used for Arundo donax removal within the Santa Ana River Watershed; 2) OCWD hiring a full-time environmental specialist and a full-time limited term environmental specialist to manage the endangered least Bell’s vireo species; and 3) OCWD and the U.S. Fish and Wildlife Service becoming partners in managing the environmental features of the 2,150 acres of OCWD lands in Prado Basin.

Dealing just with Arundo donax, given the size of the current endowment, will take decades but we will get there, eventually.

Unfortunately, habitat encroachments go beyond Arundo donax. Many thousands of acres of Southern California’s open spaces are dominated by introduced, non-native species. These reduce acreage of open space; create bottlenecks and other poor configurations, which affect proper function of waterways; negatively interface with wildlife by taking the place of their necessary nourishment and nesting areas; and displace native plant species that were once part of Southern California’s natural world.

Most conservationists recognize the importance of retaining as much of the remaining open space as possible if we intend to capture a fairly intact wildlife heritage to pass on to future generations. What is not as widely acknowledged, however, is the equally important need to get on with active, adaptive management of the resources we have left, to counteract the problems we have created. A program like the Santa Ana Watershed Association would be beneficial in many areas and habitats.

My exuberant aspirations back in 1997, when I came onboard at OCWD as natural resources director, were to rid the entire watershed of its skinny bamboo jungle, repair the native forests, and engage field biologists to track regrowth while managing wild resources back to sustainable levels.

More than 20 years later, the upper watershed has been 98%+ purged of giant reed; collectively, 8,000 acres of weeds have been removed and most of those acres are now covered in native riparian habitat. A significant amount of water is no longer consumed by giant reeds and is available, annually, to downstream users—wild and human. Endangered and other birds are recovering in the river habitats and OCWD has a $4 million grant and U.S. Army Corps of Engineers project to focus on weeding out Prado Basin for the foreseeable future.

The remaining issue is money for maintenance, which needs to be as compelling a concern to decision-makers as the initial giant reed threat.

I don’t know about you but my epiphanies are fewer and farther between these days. I guess the trick is to grab onto the one that you know could make a difference and run with it. What’s your skinny bamboo jungle?