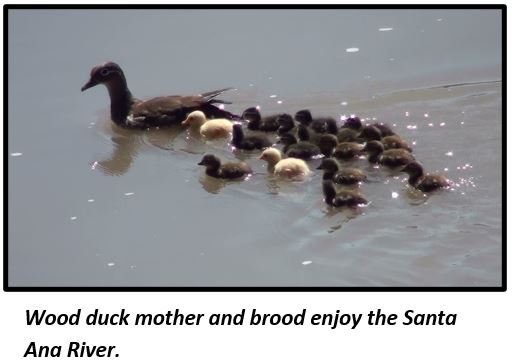 Under the skillful supervision of the Orange County Water District (OCWD; the District), there is a 6-mile stretch of the Santa Ana River that principally feeds recharge basins. The river, along with these manufactured “lakes,” filter water into a large groundwater basin to be pumped as drinking water for 2.5 million people in north and central Orange County.

OCWD’s recharge management starts further upstream in Riverside County near Prado Dam and includes the largest manmade wetlands on the west coast of the United States. Collectively, this expanse of land, river and basins act as giant natural purifiers and nurture wildlife as well.

The District conducts its Santa Ana River operations under a Regional General Permit from the Army Corps of Engineers and a Maintenance Agreement with the California Department of Fish and Wildlife under their Streambed Alteration Agreement Program.

Operating within the parameters set by those permits, natural resources and operations staffs at the District work together to ensure that river creatures thrive. They get help from an abundance of good water and Southern California sunshine that produce a high-yield crop of microbes, plants and invertebrates supporting large wildlife populations, particularly birds.

OCWD’s natural resource department set out to document bird use of the recharge area starting at the first 9 miles or so below Prado Dam, where cottonwoods and willows abound; this area is under management by the county of Orange as open space for wildlife.

As the river winds its way below Weir Canyon in Orange County, it becomes a 300 – 400 feet wide channel to the ocean. There are no trees growing in this channel so as not to impede the primary functions of flood control and water recharge. Yet, we found, over years of survey, that the wildlife use of the open channel is as great or greater than any local woodland and features an abundance and diversity of birds. Why? In this area, OCWD slows, spreads, steadies, and stretches shallow water and mudflat, greatly increasing food and habitat for waterbirds.

Most of the birds come and go in daily and seasonal cycles but a handful are year-round residents on the open river flats and pools. The birds that nest annually on the river are interestingly adapted to varying water levels. The black-necked stilt, American avocet, and killdeer require the openness.

The open-ground nesters all rely on early detection of a would-be predator so they can sneak off the nest and away before the culprit gets within wind. If too close for comfort, the avocets and stilts raise a ruckus and will even fly at the interloper. When all else fails, they fake a serious injury while leading the trespasser away. This behavior is known as the “broken wing act” and is convincing enough that three college students insisted that I come quickly and help them scoop up a displaying killdeer, to get it to a vet for mending. Of course, as soon as one gets close, the avian actor heals instantly and flies off calling loudly, mockingly. 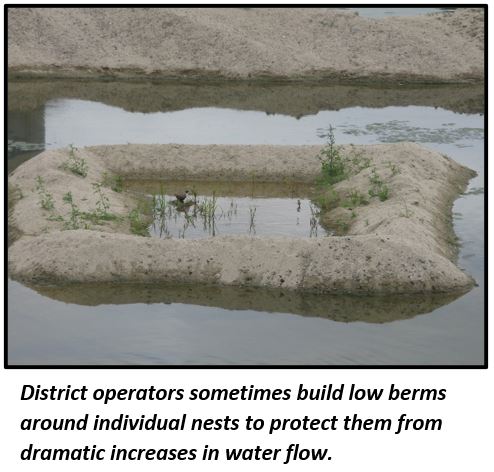 The avocets nest on sandbars, including OCWD’s T and L levees that are placed in the river to slow and meander the flow for maximum water percolation. Stilts nest right at the water line and are highly susceptible to changes in the river flow rate and height. District operators sometimes build low berms around individual nests to protect them from dramatic increases in flow. Killdeers nest wherever, sometimes not all that close to water, on the edge of the Center Levee Road, for example. Cones are then placed on either side of the nest to warn vehicle operators to steer clear. Coyotes and raccoons, among other carnivores, regularly patrol the river for food during the night. In spite of predator danger, shorebird young are produced annually and the cycle continues.

The breeding birds of the recharge area are slightly fewer than those wintering, and yet there were 125 species documented in the spring and early summer of 2016 with as many as 8,704 birds counted on a single morning in late March; most of those are loafing and feeding on the river, not nesting.

Local nesters make up about 40 species. The breeders are members of four large bird groups including raptors, shorebirds, waterfowl, and perching birds. The red-tailed hawk and Cooper’s hawk are probably the most common locally nesting birds-of-prey. Waterfowl include the mallard, gadwall, and cinnamon teal; and the most abundant of the breeding perching birds are the swallows, red-winged blackbirds, common yellowthroat, and song sparrow. The three common shorebirds nesting in the recharge area in 2019 combined for a total of 326 nests including 25 American avocet, 227 black-necked stilt, and 74 killdeer nests. Bald Eagles, once uncommon in this area, have been seen recently nesting very near the Santa Ana River in Anaheim Hills and foraging along the river.

Rare shorebirds are regular visitors to the river outside of the breeding season. They include the ruff, and stilt sandpiper. Of the waterfowl getting the most attention of observers, wood ducks nesting in boxes in Yorba Regional Park are seen regularly in the river with their young. Perhaps the rarest documented visitor to the lower river in recent years was a white wagtail, a Eurasian perching bird seen in 2016; although another rarity of interest more recently was a yellow-billed cuckoo.

Wintering birds congregate along the Southern California coast and in wetland habitats, such as the Prado Wetlands managed by OCWD, where they’ll survive and likely thrive to migrate and breed again the following summer.

OCWD recognizes the ecological values of the river and its use by wildlife while achieving its operational goals to provide ample, high-quality groundwater to Orange County. OCWD does not only recharge water, it refuels thousands of birds in the process!