The Orange County Water District (OCWD; District) has a team of Directors to protect the interests of the District and its 19 local water suppliers. They proactively lead the development of new and existing programs and policies with the ultimate goal of providing high quality and abundant groundwater to the people and businesses of north and central Orange County.

Out of the 10 directors on our team, two were up for election. I am happy to say that Director Tri Ta (Division 4: Los Alamitos, Seal Beach and parts of Buena Park, Cypress, Garden Grove, Huntington Beach, Stanton and Westminster) and Director Cathy Green (Division 6: Parts of Fountain Valley and Huntington Beach) were elected to serve another term on the OCWD board. To learn more about the OCWD board members, please visit our website.

In addition to my appointment to the OCWD board, I have been on the Santa Ana City Council since 2007. I recently ran for the city mayoral position and I say with much humility and gratitude that the good people of Santa Ana have voted me to that seat. I will become the first new mayor in 26 years. Read More… 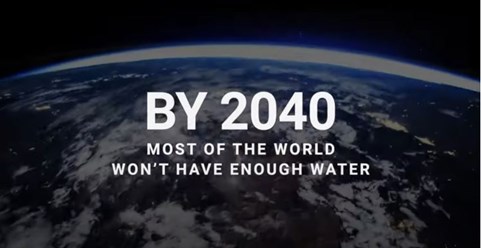 Brave Blue World, a feature length documentary narrated by actor Liam Neeson, shows a hopeful future for grand scale water fixes and notes many valid solutions that are being used today, including the Groundwater Replenishment System (GWRS), which is featured in the newly released movie now on Netflix.

Water scarcity is a global issue affecting more than 40% of the people on our planet, according to the Food and Agriculture Organization of the United Nations.

Orange County Water District Executive Director of Operations/GWRS Mehul Patel was interviewed at length about the GWRS and appears in the 50-minute documentary. “Brave Blue World covers inspiring innovations across five continents that could lead to a sustainable water future,” said Mehul Patel. “It was an honor to have the GWRS—which produces 100 million gallons per day of drinking water to supplement that found in nature—be chosen as one pioneering role model. It is especially noteworthy because we are celebrating our 12th year in operation (January 2020) and we have produced more than 300 billion gallons to date.” Read More…

“OCWD’s excellent financial standing has allowed us to provide greater water reliability for the region by financing and securing funding for critical water infrastructure projects, including the Groundwater Replenishment System (GWRS) Final Expansion,” stated OCWD President Vicente Sarmiento. “The board and staff are committed to managing the District in a fiscally responsible manner to help ensure cost savings for the 19 water agencies it serves and their 2.5 million customers.” Read More…

The District Plays a Role in Extinguishing Blue Ridge Fire 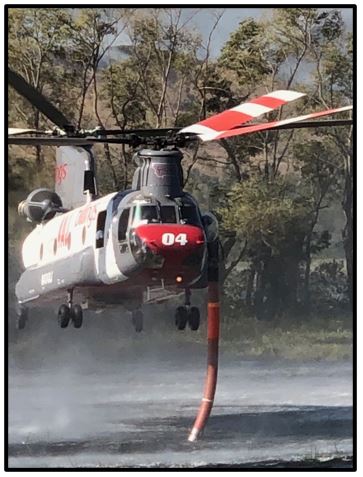 Water from the Santa Ana River is diverted to the Prado Wetlands, which the Orange County Water District (OCWD) created and manages. In late October, water within the OCWD wetlands ponds was used to fill fire helicopters to help extinguish the Blue Ridge Fire.

About 20,100 residences in Yorba Linda, Brea and Chino Hills had to be evacuated and more than 15,000 acres were scorched.

The Prado Wetlands, the largest constructed wetlands on the west coast of the United States, are located in Riverside County. The Prado Sediment Management Demonstration project, which is currently implementing a screen to remove tree roots and other large amounts of debris, was temporarily halted for safety and to ensure water availability in OCWD ponds to fill fire helicopters.

The Orange County Water District (OCWD; the District) was recognized as a Special Districts Award Winner by AT&T and Government Technology Magazine. This prestigious program acknowledges excellence in innovation and leadership for special district agencies across the country. The award was granted in the category, Technology Innovation: Citizens, which commends the use of technology to enhance services to the public during the COVID-19 pandemic. OCWD was applauded for its virtual outreach response, which includes a robust tour program, water webinars and more.

“It’s an honor to be recognized for our efforts to quickly and effectively adapt to the challenges of interacting with the community during the COVID-19 pandemic,” said OCWD President Vicente Sarmiento. “We’re committed to community education and outreach and are proud of our success in maintaining these efforts through technology and innovation,” he added. Read More…

This year’s Clarke Prize Laureate is Karl Linden, Ph.D., the Mortenson Professor in Sustainable Development at the University of Colorado in Boulder. He is an innovator in wastewater treatment technology.

The 27th Annual Clarke Prize Award virtual ceremony was hosted by the National Water Research Institute (NWRI) on Nov. 10, 2020. Highlights of the ceremony are available.

Dr. Linden’s Clarke Prize Lecture, “Water Treatment at the Speed of Light,” highlighted the ceremonies. The National Water Research Institute and the Joan Irvine Smith and Athalie R. Clarke Foundation presented him with the 2020 Clarke Prize, a medallion and a $50,000 cash award.

The Orange County Water District is a long-time NWRI member agency and produced a video that was also shown during the ceremony. 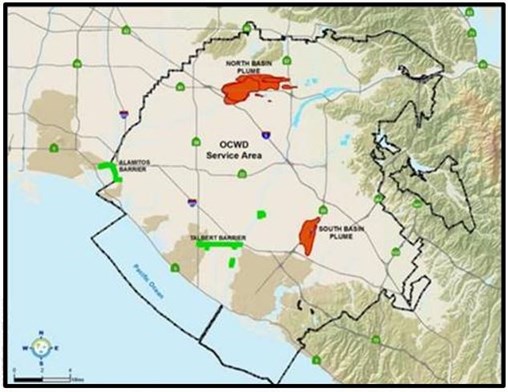 Industrial chemicals have impacted areas in the northern and southern parts of the groundwater basin; North Basin (near Fullerton, Anaheim and Placentia) and South Basin (near Santa Ana, Tustin and Irvine). OCWD is proactively seeking ways to clean up the pollution in a united effort with local and national regulatory agencies.

Below is an update on activities in and around the North and South Basin sites. OCWD will continue to update stakeholders as the need arises. Read More… 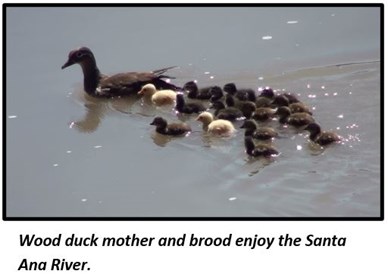 Under the skillful supervision of the Orange County Water District (OCWD; the District), there is a 6-mile stretch of the Santa Ana River that principally feeds recharge basins. The river, along with these manufactured “lakes,” filter water into a large groundwater basin to be pumped as drinking water for 2.5 million people in north and central Orange County.

OCWD’s recharge management starts further upstream in Riverside County near Prado Dam and includes the largest manmade wetlands on the west coast of the United States. Collectively, this expanse of land, river and basins act as giant natural purifiers and nurture wildlife as well. Read More… 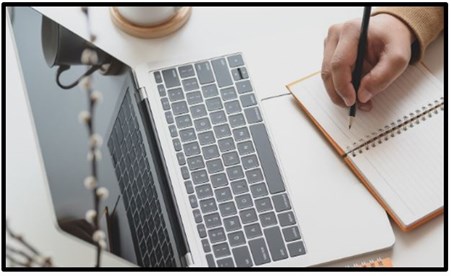 Each day, several hundred million gallons of groundwater are pumped from the Orange County Groundwater Basin to satisfy the needs of 2.5 million people in north and central parts of the county,­ and it takes more than Mother Nature to refill it.

“Soarin’ Over the Surface Recharge System” investigates what it takes to run one of the world’s most complex recharge systems, the history behind OCWD’s groundwater recharge and what the District is doing to prepare for the upcoming storm season.

In addition to an OCWD expert, attendees will hear from a local water provider about their partnership with OCWD. The free webinar is perfect for both newcomers to the water industry and seasoned professionals. Registration is now open for this exciting virtual event.

Interested in viewing a previous webinar, such as October’s “Exploring Careers in the Water and Wastewater Industry?” Visit the Water Webinars webpage to watch a recording.

Construction projects coming down the pipeline.

OCWD continues to be recognized for its leadership in the water industry. Below are the District’s recent media highlights that feature OCWD and the GWRS:

The District’s employees are its most valuable resources. OCWD is committed to recruiting the best and enriching their lives so that they may grow within the water industry and the District family. This month, we celebrate a new staff member.

Please be advised that District facilities are temporarily closed to the public in response to COVID-19. Members of the public may participate in public meetings via Zoom. Information on how to participate is listed at the top of each agenda found in the “Next meeting” box on the District’s meeting agenda site. 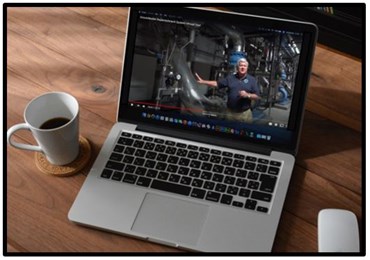 In an effort to safeguard the health and safety of its employees and the community and continue its popular tour program during the novel coronavirus pandemic, the Orange County Water District is offering virtual tours of the Groundwater Replenishment System (GWRS) in webinar format.

The virtual tours feature an in-depth look at the world-renowned GWRS through a video tour of the facility led by General Manager Mike Markus. The presentations are followed by live Q&A.

Generally, virtual tours are held the first Friday of every month and are open to the general public. The next public tour is as follows:

Registration is required for all public tours and is available through the OCWD book a tour site.

Tours for school groups and community organizations can be scheduled to accommodate group schedules. Should you have any questions or wish to obtain more information about scheduling a tour, please contact Kira Erquiaga at kerquiaga@ocwd.com.