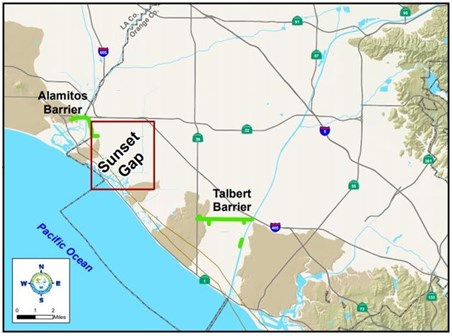 The Orange County Groundwater Basin is vast. It spans more than 300 square miles and it holds 21 trillion gallons of water, but only 1% can be removed without risking negative impacts such as land subsidence, or the compacting of earth, which causes lowering of the land surface.

The amount of available groundwater is challenged by recurring droughts; saltwater contamination from the Pacific Ocean, called seawater intrusion; and legacy contamination by businesses that manufactured and released chemicals to the groundwater as far back as the 1940s.

The Orange County Water District (OCWD; the District) manages 316 square miles of the Orange County Groundwater Basin, which provides about 77% of the drinking water supply for 2.5 million people in north and central Orange County. OCWD strives to protect the basin against contamination. My message this month addresses the oldest threat to groundwater quality —seawater intrusion, which can migrate inland underground, replacing freshwater. Read More…

First Well in the District to Receive Treatment for PFAS

The final plans and specifications for the city of Fullerton Kimberly Well 1A (KIM1A) PFAS treatment plant—the first in the Orange County Water District (OCWD; the District) to treat for harmful perfluorooctanoic acid (PFOA) and perfluorooctane sulfonate (PFOS) chemicals —are nearing completion.

PFOA and PFOS are water and grease repellents found in a variety of consumer products and industrial materials that were manufactured beginning in the 1940s in the United States. These “forever chemicals” are now discovered in not only water supplies, but in the soils and air near manufacturing and disposal locations. They are part of a larger group of chemicals referred to as per-and polyfluoroalkyl substances (PFAS).

Despite playing no role in releasing them into the environment, cities and water agencies must find ways to remove them from their water supplies.

OCWD has worked diligently over the past year with its member water retailers and launched the nation’s largest pilot testing project to evaluate and implement effective treatment technologies with the goal to get local groundwater supplies back online as soon as possible.

The District’s design efforts have been accelerated for select water retailer sites with PFOA or PFOS levels above 80% of their state response levels (RL). Read More…

The Orange County Water District (OCWD; the District) was awarded $5 million in grants from the State Water Resources Control Board (SWRCB) Division of Financial Assistance for use toward the construction of the District’s Groundwater Replenishment System (GWRS) Final Expansion project. OCWD was selected based upon the increased water supply, superior water quality and multiple benefits the GWRS brings to the region.

“These grants from the State Water Resources Control Board further solidify OCWD’s reputation as a leader in water reuse,” said OCWD President Vicente Sarmiento. “Since coming online, the GWRS has produced more than 320 billion gallons of safe, reliable water at a cost lower than imported supplies.”

Two grants make up the $5 million in funding from the SWRCB: $3,838,902 in grant funding from Proposition 13 and $1,161,098 in grant funding from Proposition 1’s Water Recycling Program. Half the grant funds are for the construction of the Advanced Water Purification Facility in Fountain Valley and the other half for the construction of two flow equalization tanks and a new pump station at the Orange County Sanitation District’s (OCSD) Plant No. 2 in Huntington Beach, all of which are part of the GWRS Final Expansion. Read More…

“Great Debate: Operational Aspects of RO vs. GAC for Advanced Water Treatment” will identify the different challenges that an operations team faces in operating, maintaining and gaining acceptance for its respective treatment trains. It will take place on Sept. 14, 2020, and will feature Orange County Water District Executive Director of Operations/GWRS Mehul Patel, among other industry experts. The debate is part of the 35th Annual WateReuse Virtual Symposium. Read More… 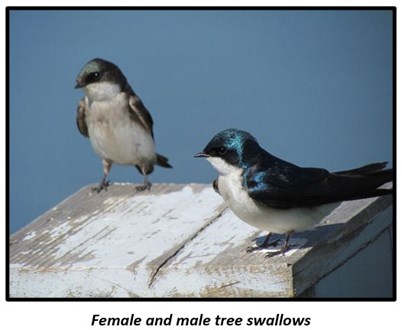 Picturing a bird nest for most of us conjures the image of an intricately knitted, cozy cup of twigs hung in the branches. There are also dozens of bird species that use tree cavities and crevices to nest and roost and some are found on Orange County Water District (OCWD; the District) lands in Orange and Riverside counties.

Some birds are year-round local residents; others migrate here, but most don’t excavate their own holes. The primary cavity-nesters are the woodpeckers. They not only provide nest holes and cover for many other wildlife species, they promote natural tree-decaying processes, and consume huge numbers of insects. Woodpeckers excavate their nesting holes during courtship. Their vacated holes are quickly occupied by secondary cavity nesters like swallows, bluebirds, and even one type of duck and several raptors.

To boost the supply of cavities for nesting birds and control against invasive avian species, and insect and rodent pests, OCWD has an extensive nest box program, primarily targeting five native birds and mostly in an area it manages at the Prado Basin in Riverside County. Read More… 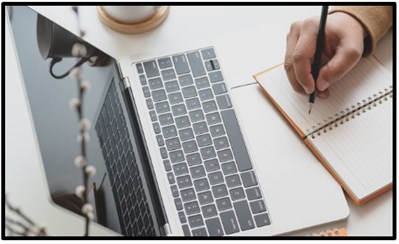 The Groundwater Replenishment System Final Expansion is underway, and now you can get an inside look into the construction activities taking place at Orange County Water District (OCWD; the District) and Orange County Sanitation District sites in Fountain Valley and Huntington Beach.

Register for OCWD’s August 26 webinar, “How’d They Do That? An Insider’s Look at Expanding the World’s Largest Potable Reuse Facility.” Hear why OCWD is further expanding the world’s largest facility for potable reuse, what the project entails, the unique way it’s preparing the soil upon which to build, and what lies ahead at each location. Registration is free but space is limited.

Whether you work in the water or construction industry and are seeking technical information or whether you’re a resident who’s driven down Brookhurst Street and exclaimed, “What are they building?” this webinar is for you. Now’s your chance to get a behind-the-scenes look at construction activities related to the project. 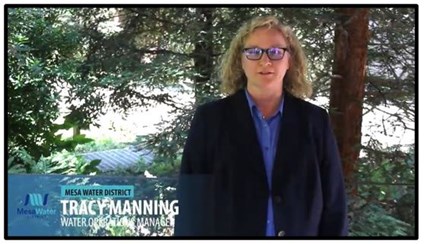 The Orange County Water District (OCWD; the District) is partnering with the local water suppliers it serves to create short videos to highlight each agency’s Consumer Confidence Report (CCR) and the investments that have been made to create safe, reliable water supplies.

These videos are meant to engage local audiences and increase their awareness of their yearly water quality report – what it contains, and the extensive testing and monitoring that goes into serving safe drinking water.

Water quality reports are typically issued in July of each year and appear on city and water supplier websites, and are referred to in their social media postings and other information materials. The CCR video is a vehicle to enhance these efforts.

View OCWD’s 19 member water suppliers page, where you will find links to agency websites, annual water quality reports and the new videos as they are posted.

Perfluorooctanoic acid (PFOA) and perfluorooctane sulfonate (PFOS) are chemicals that are prevalent in the environment and were once commonly used in many consumer products. They are part of a larger group referred to as per-and polyfluoroalkyl substances (PFAS). Due to the prolonged use of PFOA and PFOS, the chemicals are now being detected in the environment, including water sources throughout the United States.

PFAS have been detected in the Orange County Groundwater Basin. OCWD provides regular PFAS updates to community stakeholders to inform them of the proactive measures that the District and retail water agencies are taking to address PFAS in the Basin.

Construction projects coming down the pipeline:

­­OCWD in the News

OCWD continues to be recognized for its leadership in the water industry. Below are the District’s recent media highlights that feature OCWD and the GWRS:

The District’s employees are its most valuable resources. OCWD is committed to recruiting the best and enriching their lives so that they may grow within the water industry and the District family. This month, we celebrate a new staff member and three who have made outstanding contributions to OCWD. 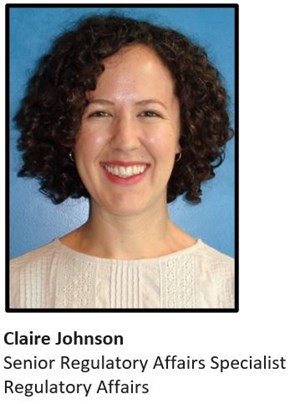 Thank you to our two retirees for your many years of service. We wish you the very best in your new endeavors and adventures in life! 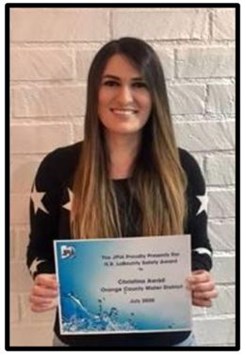 Laboratory Technician Christina Awad was chosen as a recipient of the H.R. LaBounty Safety Award from ACWA JPIA for recognizing a repetitive motion hazard within the lab and implementing an automated shaking unit to significantly reduce staff exposure to this hazard. Along with a certificate of recognition, Christina was awarded a $250 prize for her efforts.

Please be advised that District facilities are temporarily closed to the public in response to COVID-19. Members of the public may participate in public meetings via Zoom. Information on how to participate is listed at the top of each agenda found in the “Next meeting” box on the District’s meeting agenda site. 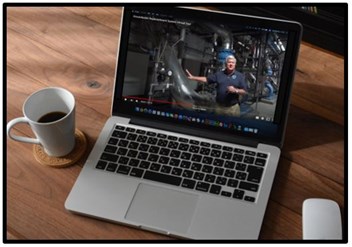 In an effort to safeguard the health and safety of its employees and the community and continue its popular tour program during the novel coronavirus pandemic, the Orange County Water District is offering virtual tours of the Groundwater Replenishment System (GWRS) in webinar format.

In July, the GWRS was experienced by 31 members of the National Alliance for Water Innovation Energy-Water Desalination Hub, a new research consortium funded by the U.S. Department of Energy to examine the critical technical barriers and research needed to radically lower the cost and energy of desalination. The tour featured a video walking tour of the GWRS facility led by OCWD General Manager Mike Markus with presentations and live Q&A featuring Exec. Dir. of Operations/GWRS Mehul Patel and Research Director Megan Plumlee.

During July, there were also two GWRS virtual tour webinars conducted for the general public, which featured a video walking tour, presentation and live Q&A by a staff member. Generally, these tours are held the first Friday of every month. Future tour dates are as follows:

Registration for all tours is available through the OCWD book a tour web page.

Future dates to begin live tours will also be noted on that site when they are available. They will be tentative and may change based on new COVID-19 information and guidance.

Should you have any questions or wish to obtain more information, please contact Kira Erquiaga at kerquiaga@ocwd.com.