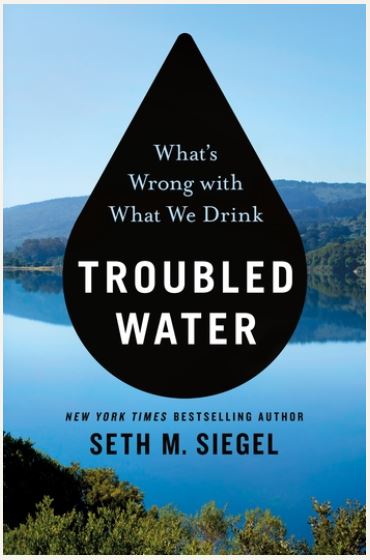 New York Times best-selling author Seth Siegel’s second book, Troubled Water: What’s Wrong with What We Drink, is an intriguing, thought-provoking, and even-handed account of what’s lurking in our drinking water. It’s a great read for water industry professionals, but also for anyone interested in learning about drinking water problems and taking control of their health and destiny.

Troubled Water gives a comprehensive overview of the complexities of managing water, the frustrations that responsible and proactive utilities have with often slow regulatory processes, and the variety of solutions and investments already made by communities. And, it features an entire chapter about the Orange County Water District and the Groundwater Replenishment System (GWRS).

“The book wouldn’t have been written if not for my interview with [former OCWD Assistant General Manager] Mike Wehner,” says Siegel.

The Groundwater Replenishment System, in this case, was the solution that spurred the book’s creation. As he writes in Chapter 9, Why Can’t We All Have Water Like Orange County? “…it is a model for us all that everything Orange County has done can be done with drinking water all over the U.S. Everyone can have tap water as clean and safe as the water Orange County produces.”

Siegel’s first book, Let There Be Water: Israel’s Solution for a Water-Starved World, was on the New York Times, Los Angeles Times and Washington Post bestseller lists. He is not only an award-winning writer, he’s also an award-winning Broadway and TV producer, a co-founder of a financial services firm, a co-founder of a trademark licensing and brand extension company with Fortune 100 and 500 clients (the company was sold to the Ford Motor Company in 2001 and, then to the Omnicom Group in 2005), a lawyer, a lecturer, a member of the Council on Foreign Relations, and so much more.

He enjoys doing a lot of things at once and exploring a myriad of careers. He aspires to “make life interesting while living ethically.”

Siegel has been fascinated with water and its infrastructure since childhood and took water policy classes in college. He currently lectures around the world about water and is a Senior Policy Fellow at the University of Wisconsin, with a focus on water issues. He has appeared as a guest speaker at OCWD’s OC Water Summit, a yearly event that focuses on California water issues.

He says that the topic of water is “vastly under reported by the media.” While researching for his first book, he found a staggering amount of information about water contamination. With his current book, Troubled Water, “I am giving a general, non-professional audience the opportunity to learn about a topic so elemental and basic to life—the right to clean drinking water.”

Siegel says there is no villain in the book except apathy and inaction. “Drinking water in this country is not as clean and healthy as it can be, but there is no good reason for that.”

There is a goal to his writing Troubled Water: For people to get smart about the issues so that they will demand better water outcomes. “Officials will follow our lead and give us what we want, but we have to show them that we care about safer drinking water.”

Troubled Water: What’s Wrong with What We Drink is available wherever books are sold, including Amazon, Barnes & Noble and independent bookstores.

The bottom line is Siegel keeps the conversation flowing and gives hope to millions of Americans that water quality will get better. We were honored to be featured in his book.