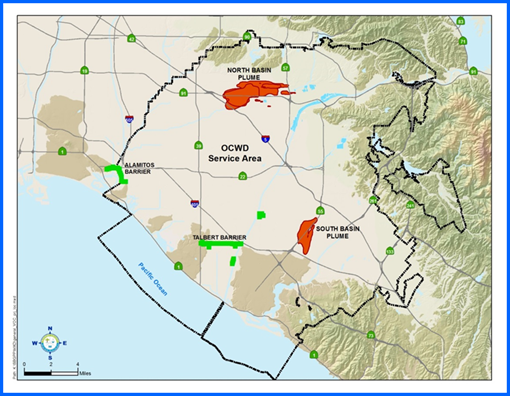 For more than a decade, the Orange County Water District (OCWD; the District) has been hard at work on two industrial areas of shallow groundwater contamination. They are referred to as the North and South Basin sites and have been the subject of many earlier update publications and presentations.

Both of the areas have active cleanups in process and are being studied in detail following a rigorous National Contingency Plan (NCP) protocol. The goal of this work is to build and operate permanent and durable systems that capture and control the shallow contaminated water and prevent it from spreading into the deeper zones where our drinking water resides.

When solvents are spilled into the dirt in large drum-sized quantities or chronic drippings over many decades, the situation becomes complicated. Sometimes it can be excavated by a tractor, sometimes it can be removed by sucking the liquid out as solvent fumes using underground straws (vapor extraction wells) and then blowing the fumes through charcoal filters. These are the kind of efforts that have long been employed on the various industrial sites by the responsible parties. However, when these solvents go deep into the ground and reach the water table, it becomes a real challenge to recover. That is our challenge.

The cleanup efforts can be thought of in three ways, the first is “source control” as described above, to be performed by the responsible parties under state regulatory agency oversight. The second is referred to as the “interim remedy” where the contaminated groundwater is mapped out and a capture system employed to prevent further spreading. The third is the “final remedy” intended to ultimately restore groundwater to its preindustrial cleanliness. That will take decades to accomplish.

OCWD is focused on the second phase interim remedy in both the North and South basins to halt the spreading of the shallow contamination and prevent it from reaching the deeper clean water that is depended upon for drinking.

A critically important element of OCWD’s work is the outreach and solicitation of public input into its activities. The process embarked upon is very complicated with a broad array of interested parties and stakeholders. Those include public officials, regulatory agencies, grant funding administrators, responsible parties and their attorneys, groundwater producers and their household customers, and public citizens with a passion for environmental restoration.

The topics being considered include public health, water supply availability, financial impacts, legal liabilities, and technical subjects such as toxicity, chemistry, engineering, and hydrogeology. OCWD’s approach to getting the message out is to gear its communications to the general public and then make the District and its work available for those stakeholders with deeper interest in the various subjects at hand.

In keeping with that commitment, OCWD hosted two stakeholder advisory group meetings on Oct. 29, 2019. One meeting was geared toward the installation and operation of EW-1 in the North Basin, the largest of the hydraulic containment wells in place in that region and the only one currently operational. The remaining wells will depend on the findings from the feasibility study currently being performed by OCWD under EPA oversight.

The second meeting of the day covered the remedial investigation that is ongoing in the South Basin. That discussion focused on the study of underground geological layering and the distribution of contamination in the area. The remedial investigation has produced considerable new soil, groundwater and chemical information. Stakeholders and the regulatory oversight agency asked that the information provided be synthesized into 14 geological cross sections. These graphical depictions will help visualize the subsurface conditions and allow for a more sophisticated interpretation of the new data.

Anyone is eligible to be a stakeholder in these meetings. A questionnaire was sent to thousands of residents in the areas of the two sites offering the opportunity to join. Those that responded with interest were invited, including concerned citizens, health and environmental regulators, responsible parties and attorneys. The turnout was modest but the level of interest by those in attendance was high. The District provided an overview of the progress for each of the projects and opened the floor for questions. Additional stakeholder meetings will follow.

Those interested in attending future meetings, or who have questions about the North Basin and South Basin sites, please contact Roy Herndon at rherndon@ocwd.com or (714) 378-3260.