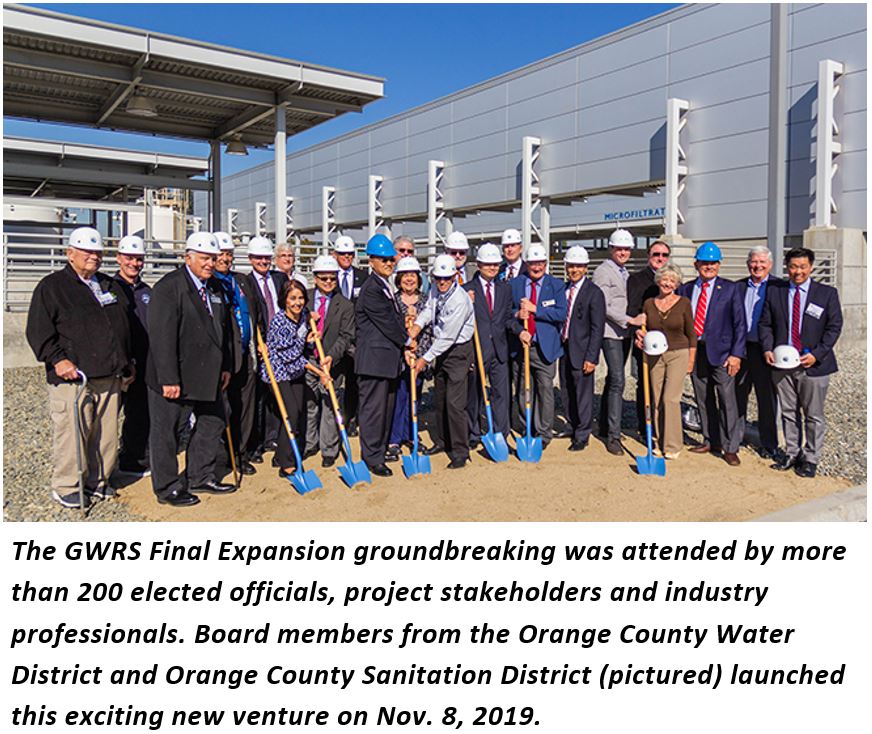 My fellow Orange County Water District (OCWD) and Orange County Sanitation District (OCSD) board members and I celebrated the groundbreaking of the Final Expansion of the Groundwater Replenishment System (GWRS) on Nov. 8, 2019.

The ceremony was attended by 280 guests that included elected officials, project stakeholders and industry professionals. We were honored to have among our guest speakers Assemblymember Steven Choi; Orange County Supervisor Doug Chaffee; Chief Deputy Director Jonathan Bishop from the State Water Resources Control Board; Deputy Director of the Water Division of the Pacific Southwest Region of the U.S. Environmental Protection Agency Kristin Gullatt; and OCSD Chairman and Chair of the GWRS Steering Committee David Shawver.

The Final Expansion of the GWRS is the third and final phase of the project and affirms our commitment to the 2.5 million citizens of north and central Orange County that we serve.

The great Albert Einstein once said, “If at first the idea is not absurd, then there is no hope for it.” The thought of turning wastewater into drinking water seemed very absurd way back in the 1960s and 1970s, but OCWD and OCSD, with great vision and conviction, knew that the impossible was possible.

Thanks to their perseverance, in 2008 the two districts made history with the opening of the Groundwater Replenishment System, the world’s largest advanced water purification facility of its kind. They did it again in 2015 with the Initial Expansion. The GWRS now provides 100 million gallons each day (MGD) of high-quality drinking water.

The purified water helps to protect Orange County’s Groundwater Basin from the threat of seawater intrusion and increases local drinking water supplies. Since we have come online with the GWRS, we have produced more than 300 billion gallons of ultra-pure water!

The GWRS has been hailed as a global model for local water reliability, inspiring other projects such as NEWater in Singapore and water reuse projects in San Diego, Monterey and Los Angeles.

The GWRS has garnered our agencies more than 50 awards and has been featured positively in thousands of media outlets, most notably 60 Minutes, Time Magazine, The Wall Street Journal, and National Geographic.

The recent groundbreaking marked an important milestone in Orange County’s water future. With the GWRS Final Expansion, all of OCSD’s wastewater that is reclaimable will be purified at the GWRS—a first in the nation!

The final expansion will include extensions to the GWRS treatment processes (microfiltration (MF), reverse osmosis (RO), ultraviolet light (UV)) in addition to conveyance facilities at OCSD’s Plant No. 2 in Huntington Beach to send all the reclaimable secondary effluent within OCWD and OCSD’s service area to the GWRS for purification.

The conveyance facilities will include a pump station and two flow equalization tanks on OCSD’s Plant No. 2 treatment plant. In addition, an existing OCSD 66-inch concrete pipeline will be slip-lined with a new pipe to convey the secondary effluent from Plant No. 2 to the GWRS.

The GWRS purification process improvements for the final expansion include six new 5 MGD RO units that will be constructed with inter-stage booster pumps on each unit to allow more efficient flux balancing and an overall reduction of energy usage across the units.

Total production will be 130 MGD, which is enough water for 1 million people when the expansion is completed in 2023. Currently, GWRS water accounts for one-third of the water that we put into the basin. It is vital to combatting climate change and sustaining Orange County’s water supplies and its thriving economy.

The GWRS is a financially responsible project that produces water at a lower cost than imported water. Funding for the Final Expansion includes $135 million from the Environmental Protection Agency’s Water Infrastructure Finance and Innovation Act (WIFIA) program and $1.1 million in grants from the U.S. Department of the Interior Bureau of Reclamation Title XVI Water Infrastructure Improvements for the Nation (WIIN) program.

Additionally, the Final Expansion received the highest ratings for all North Orange County projects submitted through the Integrated Regional Water Management (IRWM) program for Prop 1 grant funding managed by the California Department of Water Resources. The project is currently slated to receive $3.6 million in grants through the IRWM program. The remaining $186 million will be funded through the Clean Water State Revolving Fund (SRF) Loan program.

For more information about the GWRS and the Final Expansion, please visit https://www.ocwd.com/gwrs.