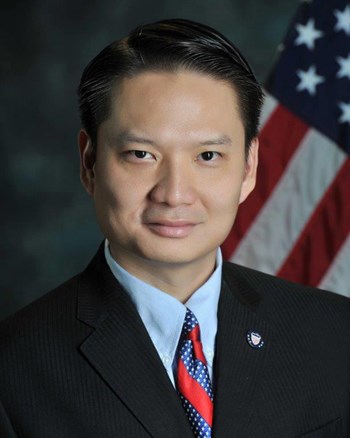 On behalf of the OCWD Board of Directors and the District staff, I would like to welcome Westminster Mayor Tri Ta as our newest board member, representing division 4. Division 4 includes the cities of Los Alamitos and Seal Beach and parts of Buena Park, Cypress, Garden Grove, Huntington Beach, Stanton, and Westminster.

The seat became vacant upon the death of Philip Anthony in July, who served on the board for nearly 37 years. Director Ta was appointed to the board on September 5.

We are honored to have Tri Ta as a member of the OCWD family. His decade of public service in Orange County will serve the District well in achieving its mission to provide reliable and safe groundwater to more than 2.5 million people in the region.

Director Ta was born in Saigon, Vietnam. He came to the United States with his family in 1992 at the age of 19. He then received a bachelor’s degree in political science and completed the requirements for a master’s degree in international relations.

From 1998 to 2006, Director Ta worked as a career consultant and then an employment counselor. This enabled him to help numerous families from many ethnic groups become self-sufficient and less reliant on public assistance by developing better job searching skills and/or adequate vocational training to obtain sustainable employment. He also helped with a variety of supportive services including, but not limited to, transportation, childcare, housing, shelter, and ancillary.

Director Ta was active in many non-profit organizations, committees and projects, including the Union of Vietnamese Student Associations (UVSA); New Horizon; Orange History Program; National Alliance of Vietnamese American Service Agencies (NAVASA); Rancho Santiago Community College District’s Measure Advisory Committee; Giving Back Program; and, Kiwanis International. He is frequently sought-after by universities as an inspirational speaker whose ultimate message to the youth is “follow your dream ’til the end.”

Director Ta resides in Westminster with his wife Ahn Doan and their two daughters, Trianh and Trimy.

Please join us in welcoming Tri Ta to the OCWD family.