Home / March 2018 / OCWD Natural Resources Staff is for the Birds!

OCWD Natural Resources Staff is for the Birds!

Most people know that the Orange County Water District (OCWD) excels at water resource management but what you may not know is that OCWD is also renowned for its many achievements in wildlife management. In building a variety of projects, such as pump stations and well sites, and maintaining percolation basins and a part of the Santa Ana River itself, rare habitats and their inhabitants are encountered. OCWD obtains permits for its work in and around these aquatic environments and with those permits come requirements for caretaking the environment and inhabitants of the river environs.

As the Santa Ana River travels from the San Bernardino Mountains to Orange County, the water grows habitat, natural foods and wild creatures. The most visible of these wild river inhabitants are the birds. Their health and population levels are good indicators of how well we are doing with all of the rest. 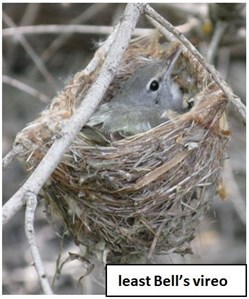 OCWD natural resources staff is totally for the birds! With the Santa Ana Watershed Association, staff nurtures the single largest population of endangered least Bell’s vireo in existence. This started with only 12 nesting territories in the Prado Basin during the early 1980s. In the spring of 2017, there were more than 1,757 vireo territories in the watershed including 549 territories in the Prado Basin. This recovery is unprecedented and is due to the management efforts of OCWD and its partners. Many other bird populations have increased as well, including the yellow warbler and yellow-breasted chat.

OCWD owns and manages a seabird nesting island in the Burris Basin, located in Anaheim. Eleven species of birds nest on the 2.4 acre island annually including endangered California least terns. Larger seabirds also nest on the island and enjoy the abundance of fish and insects the water grows for them. One of the most intriguing is the black skimmer, which sports a 4-foot wingspan and whose red and black bill is long and flattened from side to side for skimming through the water in flight, a most unique method of fishing. To get a great view of the bird island, visit the Anaheim Coves walking path/bike trail.

OCWD property is home to many other unique and sensitive birds including the threatened California gnatcatcher in the shrublands around the Santiago and Prado basins. These little birds eat insects, nest in California sagebrush, and give a call easily mistaken for the meow of a kitten. They are entirely dependent upon rainfall; if it doesn’t rain, plant and insect production are poor and the year-round resident birds suffer. 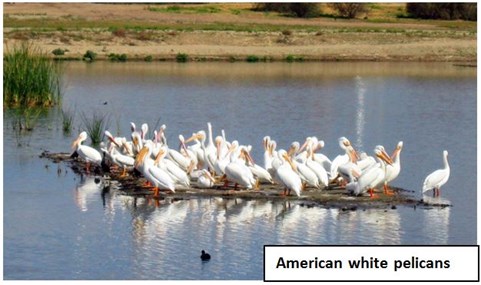 Of the birds OCWD observes and manages, perhaps none is more awe inspiring than the raptors. Of note are the recent sightings of American bald eagles on the Santa Ana River. Common nesters in the Prado Basin are the red-tailed hawk, red-shouldered hawk, Cooper’s hawk, and barn and screech owls. OCWD has erected poles with baskets on top and has, otherwise, provided boxes to entice nesting. Raptors help to control rodent populations. On weekend Prado tours during the spring, one is likely to encounter 50 or 60 different kinds of birds in a single morning, as well as experience the wildness of coastal Southern California’s single largest forested wetland.

Celebrating 85 years in the water industry, OCWD is an environmental pioneer, deciding that excellence in water resource management and strong stewardship, of all natural resources, go hand in hand.