Some of our earliest memories of childhood include stacking alphabet blocks or building simple machines or structures with Legos, Lincoln Logs or Tinker Toys. Little did we know, we were all engineers in the making, learning how and why things work and solving problems. We may have taken different life paths, but there is a bit of engineer in all of us. April 4 is Global Day of the Engineer, a time to celebrate and recognize engineers, those who have chosen exciting careers that inspire and create solutions that are among the modern wonders of this world.

Engineering is synonymous with creativity and innovation. Engineers are curious, determined, enjoy improving and solving problems and are steadfast in wanting to make a difference. Their actions have created earliest aqueducts, monumental bridges and the world’s tallest buildings, computers that are now essential parts of our lives, and systems that provide new sources of water.

Water Factory 21 (WF 21) and the Groundwater Replenishment System (GWRS) wouldn’t exist if it weren’t for the foresight and revolutionary inventions of Orange County Water District (OCWD) engineers. WF 21 became the first wastewater reclamation plant in the world to use reverse osmosis to treat wastewater to drinking water standards. It was also the first known facility in the world to use recycled water for injection into a groundwater aquifer (Talbert Barrier) to prevent seawater intrusion. This saved considerable cost over use of imported water and provided a source of water when sufficient imported supplies were unavailable to inject. 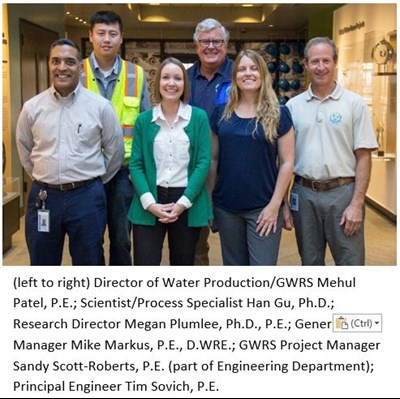 This project ushered in the acceptance of recycled water’s safety in the drinking water supply and paved the way for the new, advanced water purification facility, the Groundwater Replenishment System. The GWRS now provides 100 million gallons of water each day and saw us through a recent five-year drought—the worst in 500 years by most accounts. The GWRS is the largest advanced water purification project of its kind in the world and will expand in 2023 to provide enough water to meet the needs of one million people. It recently set the Guinness World Record for the most wastewater recycled to drinking water in 24 hours (100,008,000 gallons).

OCWD currently has 13 engineers among its employees. Though most have degrees and California State licenses in civil engineering, some have degrees in environmental, agricultural and chemical engineering. Their specialties range from general civil engineering, to water resources engineering and traffic engineering. General Manager Mike Markus is a civil engineer, as is Director of Water Production/GWRS Mehul Patel and GWRS Project Manager Sandy Scott-Roberts, who also has degrees in environmental engineering. Principal Engineer Tim Sovich is a civil engineer, with an undergraduate degree in agricultural engineering. He holds a key position in the hydrogeology department, where he creates the annual contour map that shows amounts of groundwater storage and he built the groundwater basin flow model that is used to predict changes in conditions due to factors such as a drought. Research Director Megan Plumlee and Scientist/Process Specialist Han Gu, both in the research and development department, have doctorates in civil and chemical engineering, respectively. R&D staff reviews promising new technologies to improve water quality and increase the efficiency of OCWD’s recycled water treatment and recharge operations. 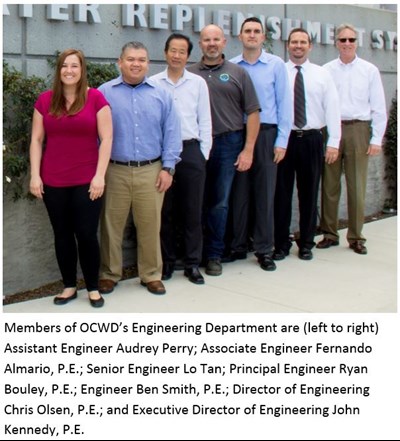 There are eight engineers in the engineering department, led by John Kennedy and Chris Olsen, who are responsible for managing the District’s improvement projects that can include a simple remodel of an existing administration facility, a $24 million pump station, or the $252 million GWRS final expansion. They are cross-trained to provide support for ongoing water production, recharge, wetlands, seawater barrier, and property management operations.

OCWD engineers are known to share their knowledge through teaching or otherwise mentoring students who want to break into the field. Ben Smith, as an example, teaches an engineering class at Cal State Long Beach. Experts predict that in order to stay competitive in the global marketplace and provide sustained growth and stability of the U.S. economy, the United States needs to produce more engineers and those in the fields of science, technology and mathematics (STEM). STEM careers are growing at 17 percent, while other occupations are growing at 9.8 percent, according to the U.S. Department of Commerce.

OCWD inspires students towards STEM careers through its yearly Children’s Water Education Festival for third, fourth and fifth graders in Orange County and its new program on the OCWD campus for middle and high school students called Next Generation Water Leaders. At the Festival, you’ll find OCWD engineers volunteering their time to this effort. Students learn about water resources, space, wildlife, conservation, biology, chemistry, and engineering through nearly 70 structured, hands-on educational activities. Each student experiences seven different fun-filled sessions during this field trip on the campus of UC Irvine. This immersion empowers youth to make small and large changes to help the planet, exposes them to an abundance of career paths, and provides a springboard into their pursuit of higher education.

Engineering, itself, is a versatile career, spanning a variety of areas. Whether one chooses to invent anti air-pollution equipment as an environmental engineer, produce a new candy bar as a chemical engineer, develop a child’s toy or an aircraft carrier as a mechanical engineer, or thousands of other creations, engineers take challenges and develop inventive solutions that make a difference in our everyday lives.

Many thanks to OCWD engineers and those around the world!