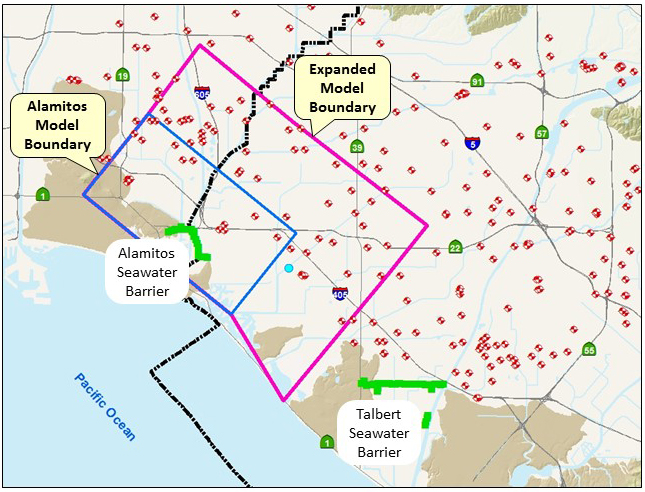 As Orange County’s population and agricultural development grew at the turn of the 20th century and more groundwater was pumped, the Pacific Ocean itself became a real threat, seeping saltwater into the underground aquifer and contaminating shoreline wells.

In the 1960s and 1970s, OCWD constructed two underground hydraulic seawater barriers. These barriers use a series of wells that inject freshwater into the ground about 4 miles inland in the cities of Huntington Beach and Fountain Valley (Talbert Seawater Barrier) and about 2 miles inland along the border of Los Angeles County near Seal Beach (Alamitos Seawater Barrier).

If one was to look at a geological map of the Orange County coastline, there are a number of elevated mesas with gaps or lowlands in between, where seawater intrusion is most prevalent.

Despite OCWD’s successful decades-long efforts to prevent seawater intrusion, including increased numbers of injection wells, seawater intrusion has been discovered most recently in the Sunset Gap beneath the Seal Beach Naval Weapons Station. In addition, one well in the city of Huntington Beach was impacted by saltwater and was destroyed in 2015.

Potential sources of seawater intrusion in the Sunset Gap include Alamitos Gap to the west, leakage across the Newport-Inglewood Fault near Landing Hill, and intrusion from Huntington Harbour. As OCWD continues to investigate the origins and extent of the intrusion in Sunset Gap, it is expanding its computer groundwater modeling capability in this coastal area.

Computer-based groundwater models are key tools used by hydrogeologists to solve groundwater problems by simulating mathematically how groundwater flows under different scenarios. For example, a potential future line of injection wells could be “tested” with the model to see if it would provide an effective seawater barrier. Using the model, OCWD staff can estimate the number and location of future injection wells, and potentially extraction wells, and how much water they would need to inject or pump. These results would form the basis of a potential future seawater barrier project.

The model expansion project is scheduled for completion in early 2019, when OCWD staff anticipates presenting its initial evaluation of various alternatives to control seawater in the Sunset Gap area.