The legislative team of the Orange County Water District (OCWD; the District) was successful in gaining recognition of the value of potable reuse as the ultimate form of conservation in recently enacted conservation legislation, AB 1668 (Assemblymember Laura Friedman D-43 Burbank) and SB 606 (Senator Bob Hertzberg D-18 Van Nuys), by ensuring that water producers in OCWD’s service area would receive a 15 percent credit or what is referred to as a “bonus incentive” for the potable water produced by the Groundwater Replenishment System (GWRS). OCWD was also able to help ward off new state taxes and burdensome legislation in line with protecting the interests of the District and its water producers. The District also gained federal support for its final expansion of the Groundwater Replenishment System and the Forecast-Informed Reservoir Operation (FIRO) program in the form of federal financing.

On the federal front, the District gained funding for the final expansion of the Groundwater Replenishment System in the form of a Water Infrastructure Finance and Innovation (WIFIA) low-interest loan of approximately $132 million or up to 49 percent of the project cost. In addition, the Forecast Informed Reservoir Operations (FIRO) program received a boost in funding from $5.5 million to $6.5 million in the Senate and $7.5 million in the House for research into atmospheric rivers. This record level of funding could lead to enhanced management capabilities at Prado Dam that would improve the ability to conserve water and promote water supply reliability. 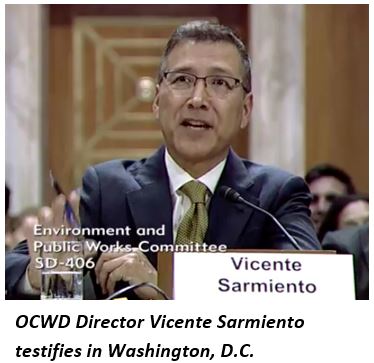 America’s Water Infrastructure Act (S. 2800) is a Senate draft bill that proposes revamping the way water infrastructure projects are authorized and funded. New versions of the bill have gained unanimous approval, and it notably contains provisions previously advocated for by OCWD. Specifically, S. 2800 incorporated the State Revolving Fund-Water Infrastructure and Innovation Act (SRF-WIIN) concept to provide low-cost funding assistance to water agencies. Under the program, State Revolving Funds could seek U.S. Treasury loans that in turn would be made available to support water supply projects, such as water recycling.

In addition, Board President Denis Bilodeau traveled to Washington, D.C., in June to meet with members of the Orange County Congressional Delegation, House and Senate committee leadership, and officials of the U.S. Army Corps of Engineers on infrastructure issues of importance to Orange County residents.

The District reviews legislative matters primarily at its Communications/Legislative Affairs Committee meeting, normally held the first Thursday of every month at 8 a.m. Members of the public are welcome to attend. For more information about OCWD’s legislative program please contact OCWD Legislative Liaison Alicia Dunkin at (714) 378-8232 or adunkin@ocwd.com, or visit OCWD’s legislative webpage.

The California legislature recently wrapped up more than a year of work on long-term conservation legislation. Throughout that time, the OCWD Board, consultants and staff engaged in an effort to gain sufficient credit or “bonus incentive” for potable reuse projects such as the Groundwater Replenishment System. This effort involved the introduction of standalone legislation on the issue of potable reuse credit, the introduction of competing conservation measures by friendly authors, and in-person meetings with the elected Orange County delegation and other key members of the legislature. The District was ultimately successful, working to overcome the opposition of the environmental community, one of the bill’s authors, and the Governor’s Office. OCWD’s efforts and those of other water agencies in California prevented the legislation from passing in the 2017 legislative session.

At the end of 2017, AB 1668 (Friedman D-43) and SB 606 (Hertzberg D-18) offered a 10 percent credit for potable reuse. While some in the water community agreed to accept this credit, the District continued to advocate for additional credit on behalf of OCWD’s water producers finding that a 15 percent credit was the minimum necessary to safeguard the investments of Orange County ratepayers, based on a survey of Orange County water producers.

During the fall of 2017, OCWD Board members, staff and consultants met with Senator Hertzberg to discuss the need for additional potable reuse credit. Senator Hertzberg was fully supportive of providing 100 percent credit for potable reuse; however, he stated that a compromise would be most viable given the opposition to any credit. At the same time, OCWD met with its local legislative delegation, particularly Assemblymembers Tom Daly and Sharon Quirk-Silva as well as Senator Josh Newman. Since the conservation legislation was just shy of the votes necessary to pass, it was essential to continue opposing the bills and asking OCWD’s delegation to vote “no” on the legislation until it included sufficient credit.

OCWD is delighted to report that this effort was successful. As a result of OCWD’s opposition, the proponents of long-term water conservation, including the governor and legislative leadership, needed to address OCWD’s concerns to have confidence that AB 1668 and SB 606 would pass. As such, the legislation was amended to provide a 15 percent credit to existing potable reuse facilities like the GWRS. This represents a 50 percent increase in the amount of potable reuse water that producers will receive credit for compared to the proposal in the bill at the end of 2017. AB 1668 and SB 606 passed on April 17, 2018, and Governor Brown signed the bills into law on May 31, 2018.

This January, Governor Brown called for the passage of a new tax on water as part of the budget process. This tax was first amended into SB 623 (Monning) toward the end of the 2017 legislative session. Though the tax would have worked to aid disadvantaged communities that lack access to clean water, OCWD recognized that these funds could come from other avenues besides a tax. As is the case with all taxes, a tax on water requires a 2/3 vote of the legislature. Facing opposition from the water community, including OCWD, SB 623 was not taken up for a vote in 2017.

OCWD continued to oppose the tax as it was considered in the budget process. Working with the Association of California Water Agencies (ACWA), California Municipal Utilities Association (CMUA), and other members of the water community the coalition has proposed numerous funding alternatives. As of July 2018, neither the Assembly nor the Senate approved the proposed tax as part of the budget. Even though the 2018-2019 budget does not include the water tax, the legislature could revisit the issue in the form of legislation between now and the end of August when the legislature adjourns on August 31. OCWD and other members of the water community continue to oppose the tax and it has not been approved by the legislature at this time.